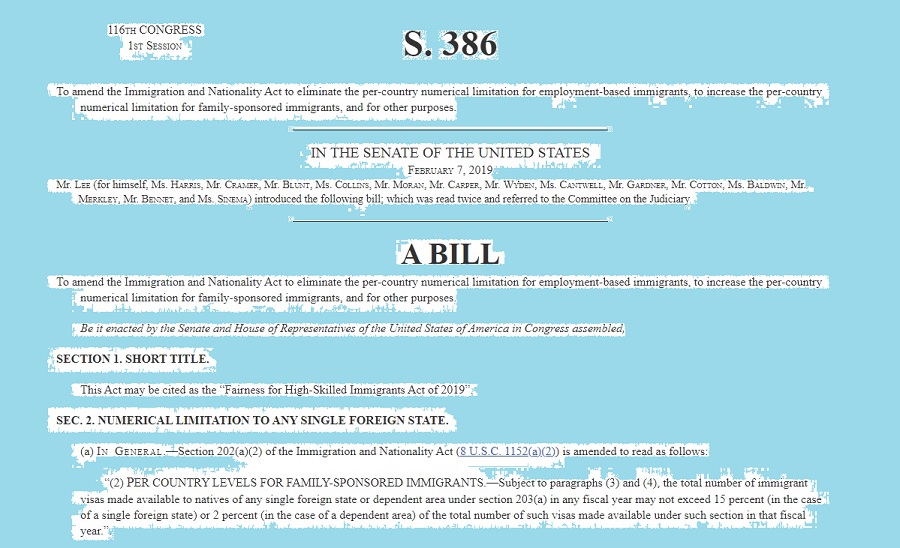 Senate passed the “Fairness for High-Skilled Immigrants Act, or S.386 on Dec 2 eliminating the present 7 percent cap for employment-based immigrant visas. The companion House bill HR1044 was passed in July 2019.

The two bills have to be reconciled and passed again by both chambers of the current Congress before the legislation heads for President Donald Trump’s signature.

The country caps have created a huge green card backlog with India accounting for about 68 percent, China another 14 percent and rest of the world 18 percent in April 2020, according to Washington think tank Cato Institute.

In a letter to House Judiciary Committee Chairman Jerrold Nadler and Subcommittee on Immigration and Citizenship Chair Zoe Lofgren, these Asian American groups have urged the Congress “to strip this new Chinese Exclusion Act language from the bill.”

Expressing “opposition to the xenophobic language that was added in Sec. 9 of the senate-passed version” of the bill, they said, this bans “many Chinese nationals from becoming lawful permanent residents and eventually citizens in the US.”

There are many ways that a Chinese person who lived in China for a good portion of their life could have an affiliation with the Chinese military, but “such affiliation does not make an immigrant guilty or even likely to commit espionage,” they said.

“This language is unnecessary,” the groups said as “Immigration and naturalization applications already ask immigrants to disclose their relationships with foreign governments and militaries.”

The groups suggested “the exclusionary language was added at the request of President (Donald) Trump as part of his campaign to scapegoat Asian Americans and immigrants of Chinese descent by equating them with the Communist Party of China.”

“Asian Americans are facing the repercussions of the attacks by Trump on multiple fronts”, they said noting, the “President has repeatedly blamed China for the covid-19 pandemic coinciding with a rise in hate incidents against Asian Americans.”

“The US government has also engaged in mass targeting and prosecutions of Asian American scientists and researchers of Chinese descent,” the groups claimed.

This “legislation racially scapegoating and equating people of Chinese origin or descent to the Chinese government is harmful and reminiscent of the Chinese Exclusion Act.”

Some of the organizations oppose the underlying bill and will continue to oppose S.386 even if Sec. 9 is removed, while others have taken no position on the underlying bill,” they said without identifying the groups opposing the legislation.

In a tweet posted on SAALT’s twitter handle, AAJC and OCANational said, “Not only do #S386 & #HR1044 fail to address the real problem of companies exploiting immigrant labor, it also currently includes explicitly anti-Chinese language that will further harm Chinese communities in the US.”

Not only do #S386 & #HR1044 fail to address the real problem of companies exploiting immigrant labor, it also currently includes explicitly anti-Chinese language that will further harm Chinese communities in the U.S. @AAJC @OCANational https://t.co/E6WenRCoKW

“The fight for a #JustImmigration system is shared by ALL immigrants & requires a shared solution,” responded @NIACouncil and @ProjectSouth. “We must ensure that 1 immigrant community isn’t served at the expense of another.”

“We need unity & action NOW,” said another SAALT tweet seeking support for immigrant women & their rights. “Immigrant women on #H4EAD, the majority of whom are South Asian, are unable to work due to a delay in processing permit renewals.”