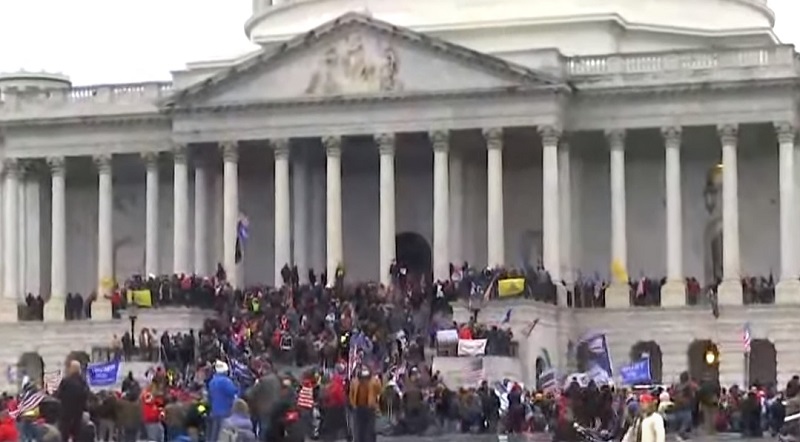 The United States of America needs to be built back better, and it needs to become America again and not Trump-land.

Never in my five decades as an American have I been more saddened or concerned for my adopted country of the United States of America than on January 6, 2021.

That was the day the President of the United States, who decisively lost his bid for re-election, orchestrated an insurrection by encouraging his supporters to attack the Capitol building, where a joint session of Congress was meeting to certify the victory of his successor.

The attack on the hallowed halls of Congress in the Capitol was the culmination of a nine-week long campaign by Donald Trump against the American democracy, at the heart of which is the free and fair election process.  Trump’s assault started just hours after he lost the election to former Vice President Joe Biden, who received 306 electoral votes.  That is the same number of votes that Trump received in 2016 – which he called a landslide.

Trump began laying the ground work for the insurrection during his reelection campaign by repeatedly claiming that if he lost it would only be because of massive voter fraud across the nation. In the aftermath of the election, he went into overdrive with that narrative pursuing a multipronged strategy.

First his motley band of lawyers, led by former New York City Mayor Rudy Giuliani, filed more than 60 cases to overturn the results. They failed in all but one.

Second, Trump himself made phone calls to pressure elected officials in charge of elections in swing states to either not certify Biden’s victory or to find enough votes that would put him ahead of his opponent.

When those efforts failed, Trump asked his vice president, Mike Pence to overturn the election by not certifying the results in key states when they were presented to Congress. That was a bridge too far for even the Vice President who resolutely stood by Trump during the four years of his troubled and troubling presidency

Inciting the storming of the Capitol was Trump’s last act. Thankfully it failed for a number of reasons, chief among them being the strength of America’s institutions.

Throughout his presidency, Trump put enormous pressure on those institutions to make them subservient to his needs and demands.  Those institutions including the judiciary, various state governments and the independent media, all showed remarkable resilience in the face of Trump’s full-frontal assault

On January 6, two unlikely heroes were Vice President Pence and Senate Majority Leader Mitch McConnell, Republicans who did little to restrain Trump’s erratic and autocratic behavior though out his presidency.    But on that fateful day, they stood firm against the president by not complying with his illegitimate request to not certify the electoral college results.

Many Republican secretaries of state and party legislators in swing states withstood tremendous pressure from Trump and his cohorts to deny President-elect Joe Biden the election. America’s judiciary also stood in the way by throwing out the frivolous lawsuits brought by the Trump campaign.

The nation owes a debt of gratitude to those institutions and individuals, who represent the best of America. They were the last line of defense against autocracy.

It is far too early to gauge the consequences of the insurrection for America. But a few things are clear: the image of American democracy has been damaged around the globe. For much of the nation’s existence, the United States has been the symbol of democracy and beacon of hope for humanity.

That political capital was what enabled successive U.S. presidents to advance democracy worldwide. Even before the January 6 insurrection, the country had ceded the democratic moral high-ground, as Trump steadily attacked various pillars of democracy at home and sided with autocrats and dictatorial regimes abroad during his four years in office. Given the considerable damage done, I am afraid it will take some time – possibly decades – for America to regain the leadership position it once had in the international arena.

Domestically, the effect of the Capitol assault will linger for a long time after Trump has departed the White House as well. The anarchists, conspiracy theorists, and delusional Trump supporters in their riot on the Capitol did not succeed in extending the presidency of their beloved leader, but they did demonstrate the intensity of the schism and divide that exists within the U.S. today.

In spite of efforts by giant figures throughout American history such as Abraham Lincoln and Martin Luther King, Jr. to form a more “perfect union,” the U.S. society has always been riven by ideological, philosophical and racial divisions. However, as the United States made tremendous progress in the civil rights arena over the past half a century, the society as a whole has been able to marginalize racist and radical elements on the right. They had been consigned to the fringes of the Republican Party.

Empowering these groups — among them white nationalists, anti-immigrant groups, and anti-Semites — has been one of central missions of the Trump presidency. Through a steady stream of lies and misinformation, he has largely succeeded in mainstreaming the underbelly of the Republican Party.

The fact that 139 Republicans in the House of Representatives and eight in the Senate — out of the 252 GOP members in both chambers — signed on to overturn the electoral college results is an indication of the negative impact Trump has had on the Republican Party and the nation.

Those groups who participated in and promoted the riot and their attack on the Capitol and democracy will not be going away any time soon.  In fact, they have indicated they have just begun to fight.

Given this, they need to be dealt with sternly and quickly.  It is reassuring that the U.S. Department of Justice has already begun the process of incarcerating and preparing to prosecute them.

More importantly, at the same time the nation has to begin the healing process. Fortunately, in Joe Biden, America has a leader who is capable of providing leadership in both in the judicial and healing process

The challenges for the next president are huge, but they are not insurmountable. As long as there is a plan, patience and persistence.

The progress the U.S. has made in is nearly 250 years of its existence has not been linear. Many of the landmark accomplishments in the political and social arena were accomplished in a zig zag manner during pivot points in the country’s history such as the Civil War, the Great Depression, and after the killing of John F. Kennedy.

At times, two steps forward were followed by one step backward. For example, the Emancipation proclamation was followed by Jim Crow segregation, which reinforced racial segregation in southern states.

Until that time, Donald Trump must be held in check and his dictatorial tendencies and autocratic behavior must be constrained.  There have been calls for Trump’s resignation, impeachment, and removal from office using the 25th amendment.

How this plays out in the short term will be determined on the political and governmental playing field.  After that, the essential thing in the long term is that Trump and his radical supporters must be held fully accountable for their un-American activities.

The United States of America needs to be built back better.  It needs to become America again and not Trump-land.  When it is democracy will win and so will freedom-loving people around the world.

(Frank F. Islam is an Entrepreneur, Civic Leader, and Thought Leader based in Washington, DC. The views expressed here are personal)