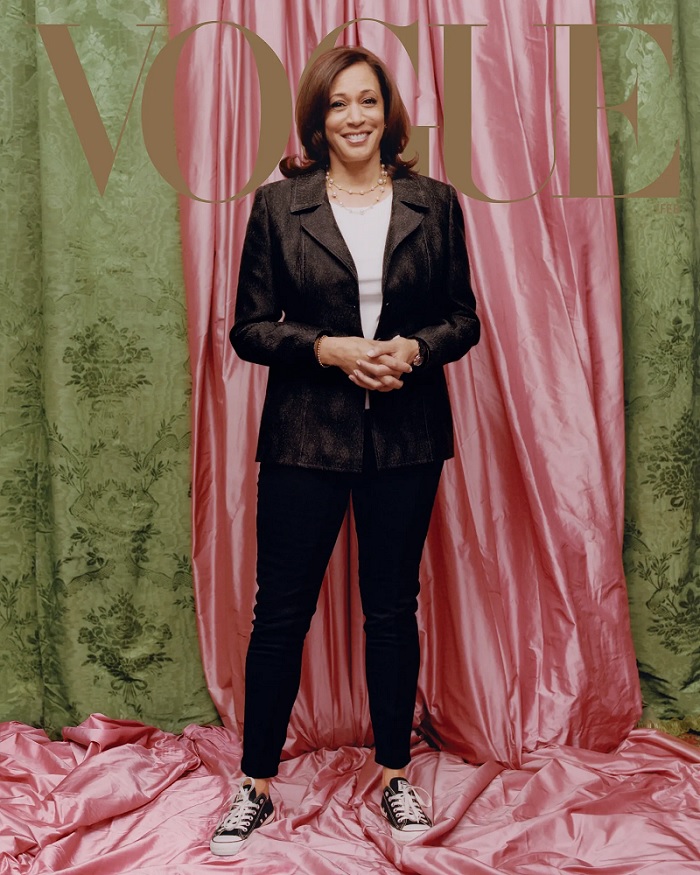 The Vogue magazine’s forthcoming issue was supposed to be a celebration of Vice President-elect Kamala Harris’ history making feat of smashing the glass ceiling to become the first woman to attain the nation’s second highest office.

Instead the magazine has courted controversy by depicting the daughter of an Indian mother and a Jamaican father as a fashion icon with a casual and “washed out,” image on the February issue’s cover.

The hotly-debated image captioned “By The People, For The People: The United States of Fashion” shows “Madam Vice President!” in a black jacket and Converse sneakers.

The image was not the one Harris had expected to run on the front of the print edition, CNN reported citing an unnamed source. Harris’ team believed the cover would feature her posing in a light blue suit against a gold background.

An apparently leaked copy of the cover, shot in front of a pink and green background, caused an uproar on social media for appearing poorly lit and styled, while others suggested it was “disrespectful” to Harris. Some Twitter users even questioning whether the image had been faked.

“Kamala Harris is about as light skinned as women of color come and Vogue still fvcked up her lighting. WTF is this washed out mess of a cover?” tweeted E. Vaughan

“Wait that Kamala Vogue cover is real?! I thought it was fake—that’s how bad it is,” wrote Imani Gandy “Did they just ask her to send them photos her husband took or…”

“Is this real?.. looks like the pictures my mom forced me to take just to send to my grandma …,” tweeted @DarkCollegeGuy.

But Vogue confirmed it as genuine — but added to the confusion by revealing a second “digital” cover showing Harris in a powder blue Michael Kors suit against a gold background, CNN said.

A spokesperson for Vogue told CNN in an emailed statement that Vogue “loved the images Tyler Mitchell shot and felt the more informal image captured Vice President-elect Harris’s authentic, approachable nature — which we feel is one of the hallmarks of the Biden/Harris administration.

“To respond to the seriousness of this moment in history, and the role she has to play leading our country forward, we’re celebrating both images of her as covers digitally.”

Both images were taken by Tyler Mitchell, who famously became the first Black photographer to shoot an American Vogue cover when he captured Beyoncé for the magazine’s September 2018 issue.

Explaining the influences behind the cover shoot, Vogue said that the apple green and salmon pink background had been inspired by the colors of Howard University’s Alpha Kappa Alpha, the “first historically African American sorority.”

An accompanying article said that Mitchell had wanted to “honor Harris’s college days and the powerful women who comprise the ranks of sororities like Alpha Kappa Alpha.”

The article also said that the Vice President-elect’s styling choices “were her own,” and that the image “reflects Harris at her casual best.”

But critics said the pictures made her skin appear “washed out” and were out-of-keeping with Vogue’s glamorous aesthetic.

Playwright and lawyer Wajahat Ali was cited as describing it as a “mess up,” adding that Vogue editor-in-chief Anna Wintour “must really not have Black friends and colleagues.”

Washington Post’s senior critic-at-large Robin Givhan, wrote that while “there’s nothing inherently wrong with this picture,” in selecting the more informal one as its cover, “Vogue robbed Harris of her roses.”

“A bit of awe would have served the magazine well in its cover decisions. Nothing about the cover said, ‘Wow.’ And sometimes, that’s all Black women want, an admiring and celebratory ‘wow’ over what they have accomplished.”

In an accompanying in-depth profile, published online by Vogue on Sunday, Harris recalls the moment the election was called and her subsequent victory speech.

“I always say this: I may be the first to do many things — make sure I’m not the last,” Harris told journalist Alexis Okeowo.