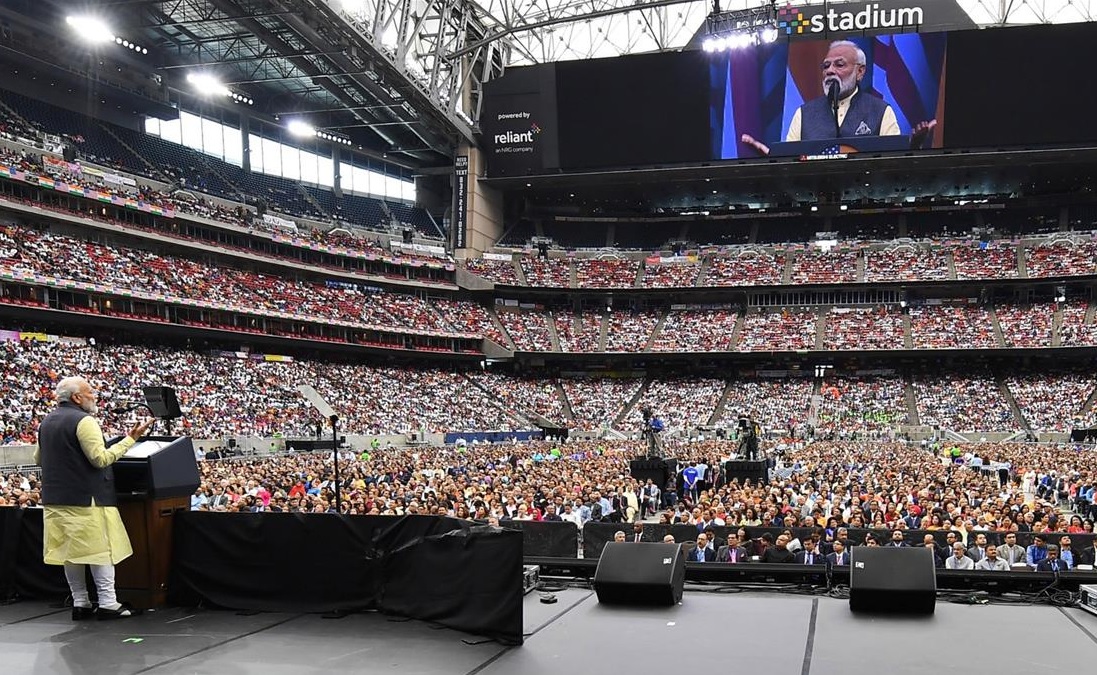 Indian Prime Minister Narendra Modi addressing Indian Americans at the Howdy Modi event in Houston in September 2019. The Indian American Attitudes Survey (IAAS) respondents are nearly evenly split as to whether India is currently on the right track or headed down the wrong track.

Second largest immigrant group in the US has mixed opinions on Indian democracy’s present trajectory.

Indian Americans making up the second-largest immigrant group in the US by and large, remain deeply connected to their homeland, according to a new survey of the political attitudes of the influential community.

But the intensity of this connection and the precise channels through which it operates vary greatly across the Indian American population which has swelled to over four million today.

The survey is a collaboration between the Carnegie Endowment for International Peace, Johns Hopkins-SAIS, and the University of Pennsylvania, according to a media release.

The IAAS is a nationally representative online survey of 1,200 Indian American adults conducted between Sept. 1 and Sept. 20, 2020, in partnership with YouGov. The survey has an overall margin of error of +/- 2.8 per cent.

Indian Americans hold mixed opinions on the present trajectory of Indian democracy, according to the survey, the second in a series on the social, political, and foreign policy attitudes of Indian Americans.

While a bare majority appear largely supportive of Indian Prime Minister Narendra Modi and his government, a significant minority is not.

While Indian Americans tend to have more conservative opinions on policy issues in India than on those in the United States, they are less pro-Modi compared to Indians living in India and less conservative in their views, it says.

On foreign policy, Indian Americans endorse efforts to deepen ties between Washington and New Delhi and share broadly negative views of China. However, they are more split on how far the two countries should go in confronting China.

Since coming to power in 2014, Modi has made outreach to the far-flung Indian diaspora a signature element of his government’s foreign policy, the survey noted.

Modi’s courtship of the diaspora has been especially notable in the US, the survey said referring to two separate, large rallies on US soil — in 2014 and 2019 — by the prime minister.

Modi sought to highlight the achievements of the diaspora, outlining the many ways in which they can support India’s interests from afar while underscoring their increasingly substantial economic, political, and social influence in the US.

These high-octane gatherings, however, naturally lead to a series of questions: How do Indians in America regard India, and how do they remain connected to developments there?

What are their attitudes toward Indian politics and changes underway in their ancestral homeland? And what role, if any, do they envision for the United States in engaging with India?

The survey seeks to answer these questions. Its authors are Sumitra Badrinathan from University of Pennsylvania, Devesh Kapur from Johns Hopkins-SAIS and Milan Vaishnav from Carnegie Endowment for International Peace.

Here are major findings of the survey: