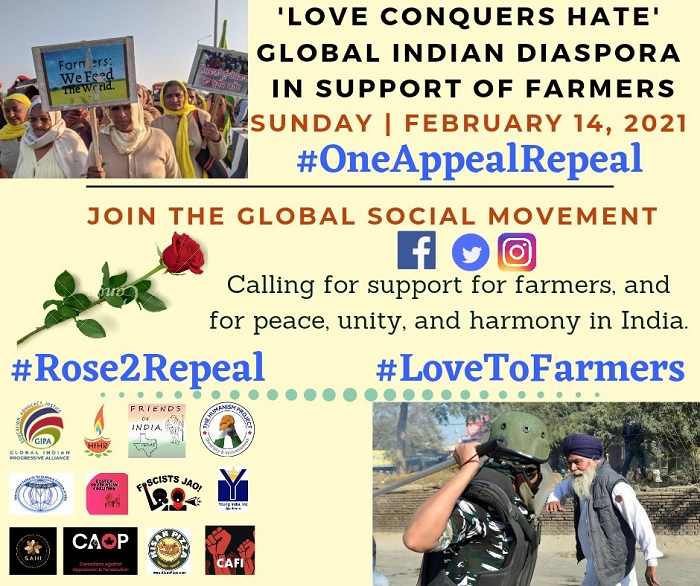 If you still haven’t decided about whom to send a rose to on this Valentine’s Day, a US-based global progressive group has a suggestion.

The Global Indian Diaspora, a coalition of progressives from the Indian diaspora across the world, has launched a unique initiative for this month of love. The group wants you to extend support to the farmers protesting in India by tweeting or sending a rose to Indian Prime Minister Narendra Modi.

The fun social media campaign, supported by over a dozen progressive organizations around the world, aims at showing that love can conquer hate. The campaign has come up with three hashtags: #Rose2Repeal #LoveToFarmers #OneAppealRepeal.

The coalition encourages people to show solidarity with the Indian farmers by sending or tweeting a rose to the prime minister and asking him to repeal the controversial farm laws, which triggered the protests.

The organizers urge followers to send a rose to Indian missions in their respective region to express their solidarity with farmers in India.

“We would, like to express our unwavering solidarity with the farmers in India and to draw attention to their non-violent protest who are braving harsh weather conditions and repressive measures for over two months,” the coalition said.

Besides the Global Indian Progressive Alliance (GIPA), the organizations that are part of this campaign include Hindus for Human Rights-USA (H4HR), Friends of India-Texas, The Humanism Project, Australia, and the Boston South Asian Coalition.

The alliance has also written a letter to Indian Embassies and consulates across the world. Calling it a “Love Conquers Hate,” campaign, the letter addressed to the consulates states, “The current movement of more than two million Indian farmers – from Haryana, Punjab, UP, Uttarakhand, Maharashtra,Karnataka and several other states – is a people’s movement led by farmers,grassroots rural workers and farm and labor unions. Farmers are the primary stakeholders of India’s agricultural sector who provide the basis for India’s food sovereignty and security, and are our annadatas (food providers).

Here is the text of the letter:

We, the members of the Global Indian Diaspora, urge the Government of India to repeal the three farm laws passed in 2020. We hereby express our unwavering support for the moral perseverance of the brave farmers of India who have continued to struggle since August 2020 for their right to be heard, for food sovereignty and security for all Indian citizens, and for justice across the Indian Republic in their demands to repeal the three Farm Laws – The Farmers’ Produce Trade and Commerce (Promotion and Facilitation) Act, The Farmers (Empowerment and Protection) Agreement of Price Assurance and Farm Services Act, and The Essential Commodities (Amendment) Act.

The current movement of more than two million Indian farmers — from Haryana, Punjab, UP, Uttarakhand, Maharashtra, Karnataka and several other states — is a people’s movement led by farmers, grassroots rural workers and farm and labor unions. Farmers are the primary stakeholders of India’s agricultural sector who provide the basis for India’s food sovereignty and security, and are our annadatas (food providers). Unfortunately, a declining demand in the Indian economy in recent years (itself a marker of a weakening economy) has kept prices for agriculture low. Two policies in particular destroyed many informal economic activities and damaged livelihoods for millions: the ill-conceived November 2016 demonetization drive and the subsequent, badly implemented, national goods and services tax.

In September 2020, the Parliament of India, at the behest of the Central government, hastily passed three new Farm Bills without time for discussion or debate- leading to the further erosion of the Federal structure and Indian constitutional framework, since agriculture is under the purview of states’ policy, and not the Centre. In response, the farmers’ mass movement led by dozens of farm unions and over 500 farmers’ organizations mobilized a peaceful demonstration in Delhi/NCR in order to push for their immediate repeal. Collectively, the Farm Bills are patently ‘anti-farmer’ and would, in the future, leave farmers at the mercy of corporate interests (including those of multinationals such as Reliance, Adani Group, Monsanto/Bayer, Dupont, etc.).

We wish to amplify this message of peace, unity and harmony in India, and urge the Government of India to reflect and act upon the following at the earliest:

Voices Against Fascism in India (VAFI)

Coalition Against Fascism in India (CAFI)

Alliance to Save & Protect America from Infiltration by Religious Extremists (ASPAIRE)

Coalition of Americans for Pluralism in India (CAPI)