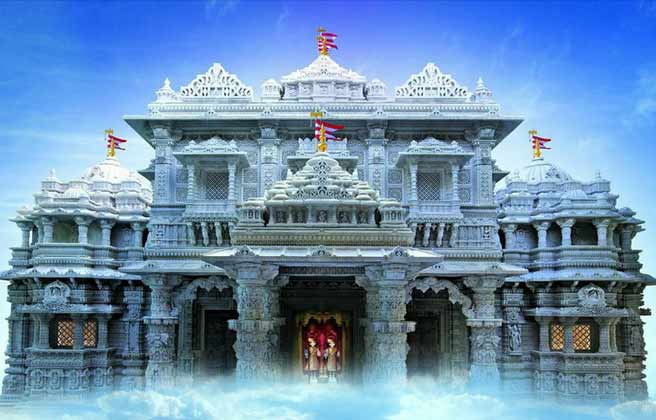 Workers from India were paid $1.20 and their passports were confiscated: report.

FBI agents and other law enforcement officials raided the BAPS Shri Swaminarayan Mandir in Robbinsville, NJ, following a lawsuit by several workers accusing the temple of exploiting them and paying the equivalent of roughly $1.20 an hour.

The raid was first reported by the local outlet NJ105, which said the agents showed up at the temple before 8 a.m. Besides the FBI, at least two other federal departments, the Department of Homeland Security and the Department of Labor, were involved in the action, which reportedly linked to claims of labor and immigration law violations, the New York Times reported.

According to the paper, which quoted the lawsuit and lawyers representing the workers, the majority of the works are Dalits. “About 90 workers were removed from the site, according to a person familiar with the matter,” it said, adding that they “lived in trailers hidden from view, had been promised jobs helping to build the temple.”

“They thought they would have a good job and see America,” immigration lawyer Swati Sawant told the Times. “They didn’t think they would be treated like animals, or like machines that aren’t going to get sick.”

The workers were reportedly brought to the country on R-1 religious visas. According to the lawsuit, they were “presented to the U.S. government as volunteers” and “were asked to sign several documents, often in English, and instructed to tell U.S. embassy staffers that they were skilled carvers or decorative painters.”

READ: Will stand in all of North America as one of the greatest places of faith: Sen. Cory Booker at inauguration of BAPS temple in New Jersey (August 12, 2014)

The USCIS website says R-1 visa holders can work for a US nonprofit religious organization, but will “not work in any other capacity except as a religious worker.”

“Lawyers for the men, however, said they did manual labor on the site, working nearly 13 hours a day lifting large stones, operating cranes and other heavy machinery, building roads and storm sewers, digging ditches and shoveling snow, all for the equivalent of about $450 per month,” the Times wrote. “They were paid $50 in cash, with the rest deposited in accounts in India, the complaint said.”

Their passports were confiscated, and they were barred from talking to temple visitors, according to the suit.

However, BAPS chief executive Kanu Patel told the paper that he disagreed with the wage claim. A spokesman for BAPS also disputed the charges that the workers did tasks outside of the purview of the R-1 visa. “They have to be fit together like a jigsaw puzzle. In that process, we need specialized artisans,” Lenin Joshi told the paper. “We are naturally shaken by this turn of events and are sure that once the full facts come out, we will be able to provide answers and show that these accusations and allegations are without merit.”

The Shri Swaminarayan Mandir was inaugurated in August 2014 by the late Pramukh Swami Maharaj, who was the spiritual leader of BAPS. The inauguration ceremony was attended by New Jersey Sen. Cory Booker and the current House Majority Leader Steny Hoyer (D-MD.

“Today is truly a day of celebration, Booker said at the event. “Today is a day that is not just good for this community or the state of New Jersey but indeed what you are doing is great for all of America. I am so impressed. Indeed, I give reverence to an extraordinary structure (the Mandir) which will stand in all of North America as one of the greatest places of faith we have but I am more impressed with the people of this community.”