In the recent past, a few Indian films creating a buzz at international film festivals have centered around music and musicians’ dreaming about making it big.

Rima Das’, ‘Village Rockstars’, an Assamese language film received rave reviews when it premiered at Toronto International Film Festival. It also went on to be chosen as India’s official entry for the 91st Academy Awards.

If ‘Village Rockstars’ featured a young small town girl dreaming to be a Rockstar, debutante director Aakash Prabhakar’s ‘Freddie’s Piano’, also exploring the central theme of music, is a sweet reminder of how story lines have come of age in Indian movies.

Prabhakar is “ecstatic “ about his maiden venture in cinema making it to the official lineup of New York Indian Film Festival NYIFF 2021.

“Freddie’s Piano is a story which is very personal to me at some level and so it is very close to my heart,” he says about the English language film about two half-brothers, Aden and Freddie.

“Although the film on the surface looks like it’s about the elder brother(Aden) trying to buy his Younger brother (Freddie) a grand piano for Christmas, the piano is a metaphor or a way for Aden to tell his younger brother that he is there for him no matter what.”

NYIFF will be virtually showcasing films in 15 Languages this year from June 4 to 13.

‘Freddie’s Piano’ is a young adult film about what Aden does to get his younger brother Freddie a grand piano for Christmas to fulfill their father’s dream.

Freddie wants to give Aden the freedom he dreamed about when their father was alive. In the end, both brothers learn that what they really need is each other.

This is not the first international outing for Prabhakar’s film as earlier ‘Freddie’s Piano’ was screened virtually at the Scottsdale International Film Festival last year from November 6 to 15, 2020.

Prabhakar comes from a theatre background and has done several plays, short films under his company Here and Now since 2015. 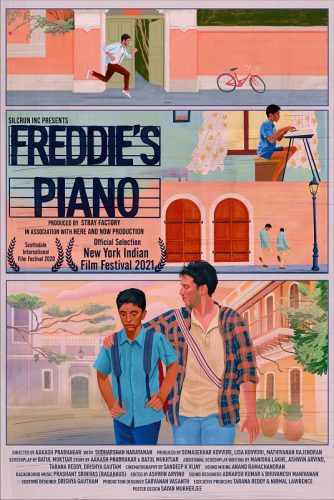 In theatre, he has worked with renowned names like Atul Kumar, Jeff Baron, and Sunil Shanbag. He has also acted in a number of short films like ‘The Long Drive’ with Sheeba Chaddha, ‘The Connection’, and ‘Shut up’.

Prabhakar says that he has always loved and been a part of theatre, writing, acting, and directing plays in Mumbai.

All through his college and theatre days Prabhakar was fascinated by films like ‘Life Is Beautiful’ (Roberto Benigni), ‘Salaam Bombay’ (Mira Nair), ‘Children of Heaven’ (Majid Majidi). So he would try and write simple stories that would make people smile with joy and tears in their eyes.

‘Feddies’ Piano’ is set in the charming locales of Pondicherry in India.“We have set the film in Pondicherry because it is a small, quaint town with a curious mix of French and Tamil architecture and culture,” says Prabhakar about choosing it as the backdrop to his story.

Film’s surprise package is Pranav Mylarassu, who plays 12-year-old Freddie in the movie. He is a star pupil of A.R Rahman’s KM Music Conservatory, which has added an additional dimension of authenticity to the film.

This is also Pranav’s debut as he is not an actor but primarily a pianist which landed him the role after doing many days of workshop with the director.

The film’s screenplay was written by Batul Mukhtiar, a national award-winning filmmaker from India. It’s produced by independent film producers Somasekhar Kovvuri and Lisa Kovvuri based out of New Hampshire.