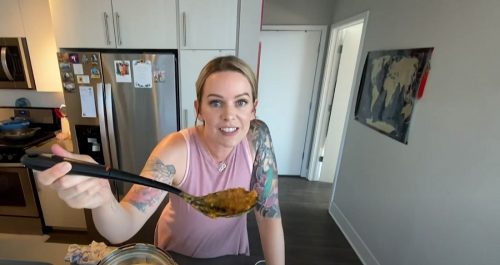 Chicago based Kari Crawford , who’s planning her wedding in India later this year spent the pandemic learning to make everything from kheer to pedas.

It’s not often that you come across an American painstakingly giving a tutorial to make an elaborate Indian dessert like rabri or kaju katli. But that’s Chicago based vlogger Kari Crawford for you who makes an Indian pav bhaji with as much passion as an American green bean casserole.

Crawford, a bachelors student in interdisciplinary studies from Georgia university and is also studying to become a yoga teacher has been getting popular on her YouTube channel KariLeighC thanks to her flawless Indian cooking and her greetings that begin with a namaste.

So how does a white girl, who has never been to India before get into elaborate Indian cooking. Talking to the American Bazaar from her Chicago home, Kari says, “I did my first food vlog about 5 months ago, where I made chai and namak para, which by the way is one of my favorite snacks.”

However Kari confirms that Indians who are very emotional about their food do not easily approve of anyone. Her first vlog got her a lot of flak. She says, I got a lot of criticism for not adding any water to my chai. But honestly that’s the consistency me and my fiancé prefer.”

On her journey to like and learn Indian food, Kari says, “the first Indian dish I made on my own was mulligatawny and egg curry. I had seen it on TV somewhere and it looked delicious.  It turned out perfect.”

Kari’s big motivation also came in the form of her Indian boyfriend Debajyoti whom she was dating. She says, “I made it for DJ, as I call my fiancé when we started dating and he was amazed at how authentic it was. We started dating just before the pandemic hit and once it did, I was at home more often and I began cooking different dishes every day, if not multiple times a day.” 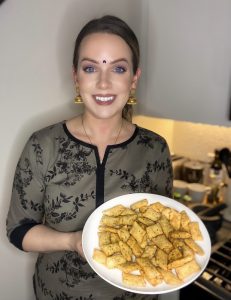 About her cooking expeditions she says, “I made samosas from scratch, puri, roti, parantha, nimki, goat and lamb curry, palak paneer with homemade paneer and soon it spiraled into a passion.”

Kari who one day plans to open an Indian café with an American twist says her foray into cooking is not totally incidental. She says, “I started as a hostess when I was 16 and then worked my way to server, bartender, lead then manager and general manager. I love the atmosphere of the industry. I had to learn how to cook in restaurants and it just grew.”

On cooking Indian food she says, “I began with desserts like rabri and then moved to kheer and then I made kaju katli. I have learnt how to make pedas too and now I have a major sweet tooth.”

Kari likes to source all her Indian ingredients herself and she admits that she does get some stares when she’s buying Indian masalas all by herself.

Indian cooking is not Kari’s only introduction to Indian culture as she plans to tie the knot very soon in an Indian ceremony in India itself. About her impending wedding, she says, “We plan to have a ceremony, sangeet, and reception in Debajyoti’s hometown of Rourkela in Odisha, India come December.”

Kari who met her Indian fiancé at a speakeasy cocktail lounge where she worked as a manager. His fiancé later proposed to her using a flash mob and both of them started a YouTube channel that showcases their life together.

In anticipation of her wedding, Kari has learnt Hindi and also a bit of Odia.”

Kari says that even before she met her fiancé, she had a deep rooting for the culture. She adds, “I have a large Ganesha tattoo on my arm which I got 4 years prior to meeting him.”

On her Ganesha tattoo, Kari says, “I wasn’t raised to be religious but it was during a time that I was at a low phase of my life and had dropped out of school and was feeling stuck. It was around that time that I began researching religions and Hinduism aligned with how I felt.”

On planning a cross-continental wedding during a pandemic, Kari says, “It’s difficult to plan a wedding from across the globe and even more so during a pandemic. My fiances’ family lives in a small town in Odisha. We are cautiously optimistic that we will be able to travel for the wedding. We have been worried if my fiance’s parents would be able to leave the country to be here for the American wedding. We know several of his friends who had planned on coming will not be able to make it due to lag in visa approvals.”

The pandemic did change the couple’s plans as they had planned a visit prior to the wedding to plan everything and pick out wedding attire but all of this had to be cancelled.

But until then, Kari is happy to hone her Indian cooking while also sharing her knowledge with the world!