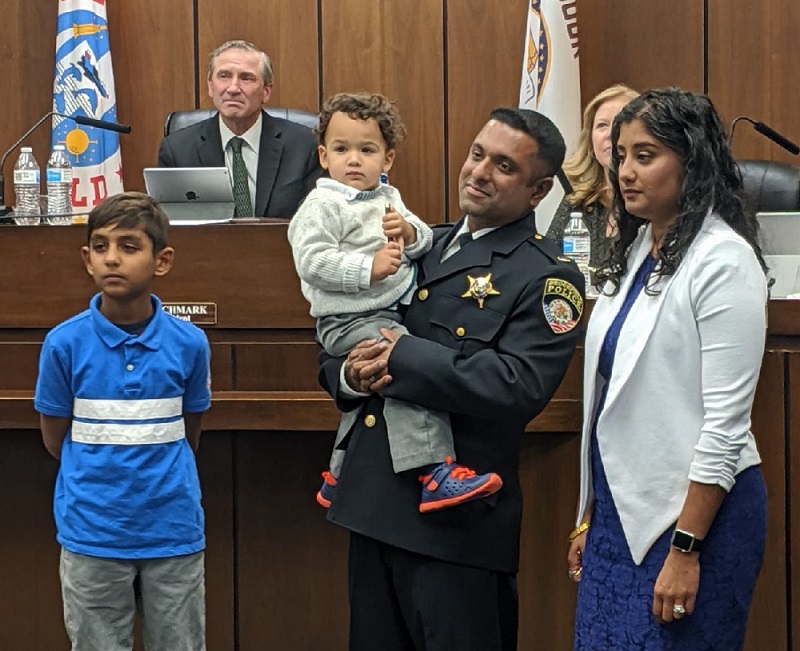 Kuruvilla to make history as the first Malayalee American police chief in the US.

Michael Kuruvilla is set to make history as the first Malayalee American police chief in the US when he becomes head of the police force in Brookfield, a Chicago, Illinois, suburb.

Currently Deputy Chief, Kuruvilla, 37, the first Indian-American hired by Brookfield police in 2006, is expected to take over from Edward Petrak, who is stepping down as chief effective July 12.

Recommending Kuruvilla as his successor to Village Manager Timothy Wiberg, Petrak said. “We just have a great, talented bench of people here and for years and years to come.”

“I’m not ready to announce anything yet, but [Kuruvilla] would sure seem to be the logical way to go,” Wiberg told local Riverside-Brookfield Landmark. “I’ll be posting the job internally first and see what that results in.”

Kuruvilla was presented with the “40 Under 40” Award by the the International Association of Chiefs of Police (IACP), the world’s largest and most influential professional association for police leaders, in September 2020.

In nominating Kuruvilla for the award, Petrak wrote that his deputy was “an up-and-coming leader in our ever-changing field of law enforcement.

“Over the last 14 years, I have watched Mike grow from an eager learner to a true leader in our police department. His positive and progressive attitude is infectious and makes him a strong, naturally suited leader.”

Kuruvilla, joined the department in 2006 after obtaining a master’s degree in social work and then working as a police crisis worker in Brookfield.

“Although I have shed the formal title of social worker, my job still requires mediating between and for people in crisis and discord almost daily,” Kuruvilla wrote in his application for the award.

“Our profession has shifted immensely in recent years to increased mental health awareness, and I have proudly led the charge to model and teach my department members and those in neighboring communities how best to serve those in need.”

In addition to his role as a deputy police chief, Kuruvilla and his wife volunteer with a nonprofit that serves the needs of at-risk women victimized by the adult entertainment industry and human/sex trafficking. Kuruvilla has been a member of the organization’s board for more than six years.

“My ability and the opportunity to provide someone who may be suffering and in pain even just a moment of reprieve and peace is important and fulfilling to me,” Kuruvilla wrote.

“Kuruvilla has risen through the ranks of the Village of Brookfield Police Department rapidly leading into his 15th year of service due to his balanced approach, gifted intelligence, and perseverance,” according to his official profile.

In his command role, he oversees patrol and investigations and serves as the secondary lead for the entire department. He consistently exemplifies leadership, including stepping up to serve as acting chief during two major incidents while still a lieutenant.

He has also procured a grant to secure bulletproof vests for officers, taken the lead in understanding the state’s new laws regarding cannabis, and served for six years as president of the police union before his promotion to lieutenant, it said.

Kuruvilla has the distinction of being both the first Indian American hired at Brookfield and the first officer in the department to complete crisis intervention training.

Kuruvilla is also a board member and law enforcement liaison for a nonprofit that serves the needs of women victimized by the human and sex trafficking.

Finding motivation in helping those experiencing crises or chaos, Kuruvilla holds a deep sense of service and is proud to administer justice in his role as an officer, IACP noted.

“My ability and the opportunity to provide someone who may be suffering and in pain even just a moment of reprieve and peace is important and fulfilling to me,” he was quoted as saying.