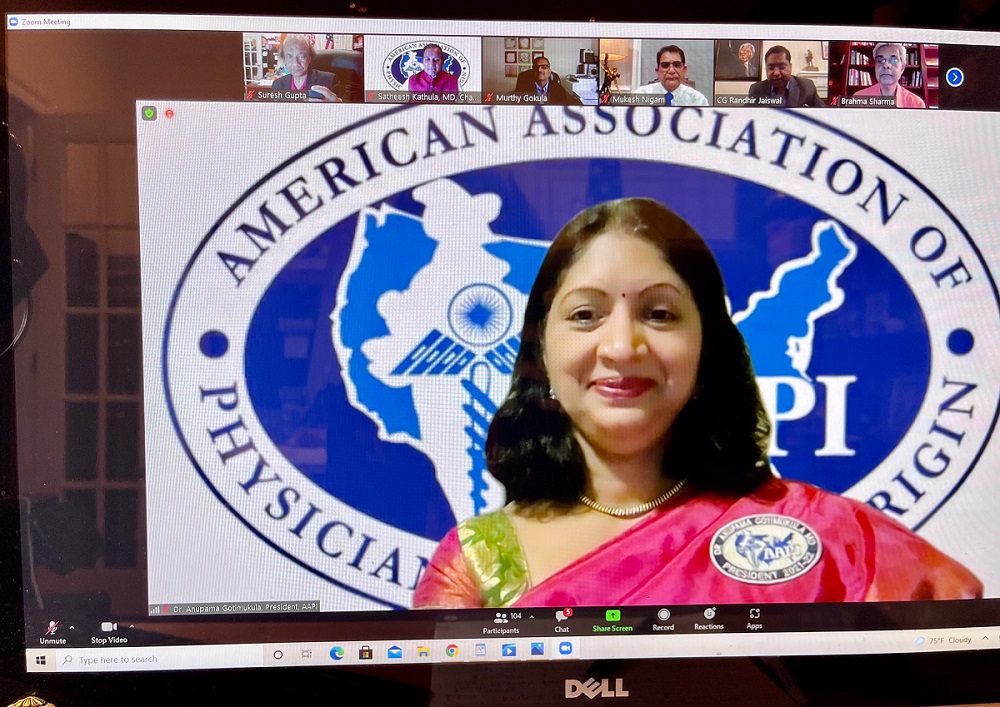 American Association of Physicians of Indian Origin (AAPI), the premier medical organization in the US, has launched ‘Adopt A Village’, a rural health initiative in India.

In a show of support for the initiative, India’s ambassador to US, Taranjit Singh Sandhu and consul generals in Chicago, New York, Houston, Atlanta and the deputy consul general in San Francisco participated live in the virtual launch event on Aug. 27.

The villages planned to be adopted are spread across Andhra Pradesh, Gujarat, Karnataka, Tamil Nadu and Telangana.

Results would analyzed by GTC and further action recommended by their team of experts will also be followed up.

This is a small contribution from AAPI to Mother India in celebration of “Azadi Ka Amrut Mahotsav,” said Dr. Gotimukula thanking the AAPI members for their generous support and for sponsoring their ancestral villages and going back to their roots.

Chaired by, Dr. Satheesh Kathula, the much needed and popular program has Dr. Gotimukula, Dr. Jagan Ailinani and Dr. Ram Singh as members of the committee.

In his opening remarks, Dr Kathula pointed out that majority of India’s nearly 700,000 villages, where about 77 percent of the poor live, have no access to safe drinking water and sanitation.

“By adopting one village at a time and working with the government and NGOs, NRIs can make a difference,” he said referring to some of the programs already in place in several villages across India.

Dr. Ravi Kolli, president-elect of AAPI, said, “While India has made substantial progress in health care, there are significant gaps and divergence in health metrics in different regions in India.

“An individual can make a tremendous difference in the lives of many in India by adopting a village,” said Dr. Jagan Ailinani, who set an example by adopting his own birth village in Telangana state.

There is a real will and desire on the part of state and central governments in India to work with NRIs and NGOs to bring development to rural India, said Dr. Ram Singh.

In his message to AAPI members, Taranjit Singh urged the Diaspora community to come forward to honor India by joining in the year-long celebrations.

In his address on “Indo-US Relationship in Healthcare – Rural Health Perspective,” India’s consul general in Houston, Aseem Mahajan said “AAPI can play a big role in rural health, which has been a priority for the Government of India.”

“We can work together, collaborating and sharing of knowledge and expertise, including medical education,” he said.

Dr. Suresh Reddy, past President of AAPI and currently an elected Trustee of Oakbrook Village in Illinois, announced that he is adopting his native village in the state of Telengana.

Dr. Gotimukula urged AAPI members to join this movement and adopt a village. AAPI members/families can sponsor a village by emailing: aapipresident@aapiusa.org and info@aapiusa.org.