Manish Chauhan’s US solo debut on Sept. 14 to feature as the climactic end of the documentary

The inspirational story of an Indian ballet dancer pursuing his passion despite growing up in the slums of Mumbai comes alive in a new documentary ‘Call Me Dancer’ set to be released in January 2022.

Dancer Manish Chauhan himself was at hand to relate his story at the official trailer launch of the film by Leslie Shampaine and Pip Gilmour, hosted by Meridian International Center in Washington, DC, on Wednesday evening.

The conversation was followed by an intimate, contemporary dance performance by Chauhan, choreographed by Lucy Bowen McCauley and accompanied on tabla by Broto Roy.

Chauhan’s US solo debut will take place at the Kennedy Center on Sept. 14, which will also be filmed as the climactic end of the documentary set to be released in January 2022. 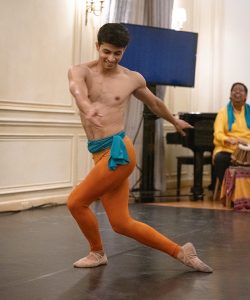 International pop star and singer/songwriter Jay Sean will produce an original song for ‘Call Me Dancer’, in addition to serving as Executive Producer of the film

“Meridian is committed to highlighting the important ties between the United States and India through meaningful cultural engagements like this Call Me Dancer film discussion and performance,” said Terry Harvey, Vice President for Meridian’s Center for Cultural Diplomacy.

“We believe dance is a powerful tool of diplomacy to connect people around the world and facilitate cross-cultural understanding through cultural exchange.”

The dance documentary is aiming for a January 2022 film festival world premiere. It is a production of Zee Entertainment and a co-production of ARTE.

“Call Me Dancer is about artistic assertion against all odds. It is about pursuing your dreams, even when reality seems overwhelmingly harsh,” said Shailja Kejriwal, Chief Creative Officer, Special Projects, Zee Entertainment Enterprises Ltd. (ZEEL).

“We all need uplifting stories, hope and motivation, and this docu-film is all the more inspiring because it is not a figment of imagination, but true to life,” she said.

“It explores emotions of hope, heartache and sheer perseverance that are universally known and felt, and that’s what has brought us onto this journey.”

“We are humbled to be a part of this story which narrates how passion, fate, serendipity and multiple strands of creativity can coalesce to create miracles,” Kejriwal said.

Film Synopsis: When a hip-hop dancer accidentally walks into a ballet class in Mumbai, his world opens up, and a passion is born. The tough ballet master recognizes his talent and dares him to fulfill his dreams of dancing professionally — giving him the courage to defy family, culture and poverty. Watch the entire three-minute trailer HERE.