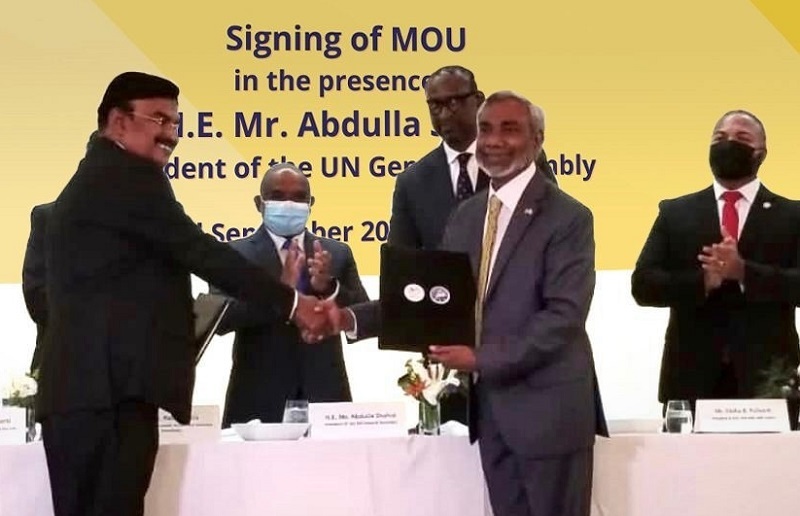 During the kickoff of this initiative, an MoU was signed by Elisha Pulivarti, CEO of USISME Council, based in Washington DC, and G Rathinavelu, Chairman and Co-Founder AIEF, based in Mumbai in the presence of UN General Assembly President Dr. Abdulla Shahid.

About 35 African countries representatives and another 35 Business Entrepreneurs attended this historic event at Armenian Hall, New York, according to a media release.

The United States has more than 32 million, and Africa continent has 50 million and India has 63 million small-medium enterprises creating more than 70 percent employment and 55 percent of GDP.

Noting that MSMEs are the bedrocks of any economy contributing to employment, sustainable development, and poverty alleviation, the release said, It is in the spirit of strengthening these partnerships that the USA-Africa-India SMEs B2B Collaboration is being launched.

This exciting new initiative will increase linkages between businesses, especially small business entities, throughout Africa, India, and the United States, it said, and in doing so, it will directly impact communities on the ground across all three of these commercially dynamic regions.

This triangular partnership initiative not only connects developed nations with developing nations but also opens business and economic opportunity and empower the developing nations, the release noted. It is also going to help the natural wealth of Africa transform into specialty top-quality products for the global markets.

It’s the strategic global initiative of Africa India Business Center (AIBC), which is a platform designed for the business communities in Africa and India to access and promote their respective markets.

The SME Council provides platforms, both governmental and non-governmental, that will induce sharing of information regarding new and innovative business endeavors emerging on the horizon.

AIEF established in Chennai, India in 2007 aims to support strong B2B links for overall development of India and Africa specially to empower Arican Entrepreneurs and businesses.

The Co-founders of the Foundation were instrumental in conceptualization of TEAM-9 (Techno Economic Approach for Africa India Movement) between 8 West African countries and India.

The success of TEAM-9 inspired the Co-founders to create AIEF to connect the entire African continent with India. In order to achieve these goals, AIEF plans to build Africa India Business Complex in Mumbai, India, the release said.

All 55 Africa Continental countries will have their trade offices and representatives in Africa India Trade center to promote the “America-Africa-Asia” (AAA) Trade and Economic Development among these countries.