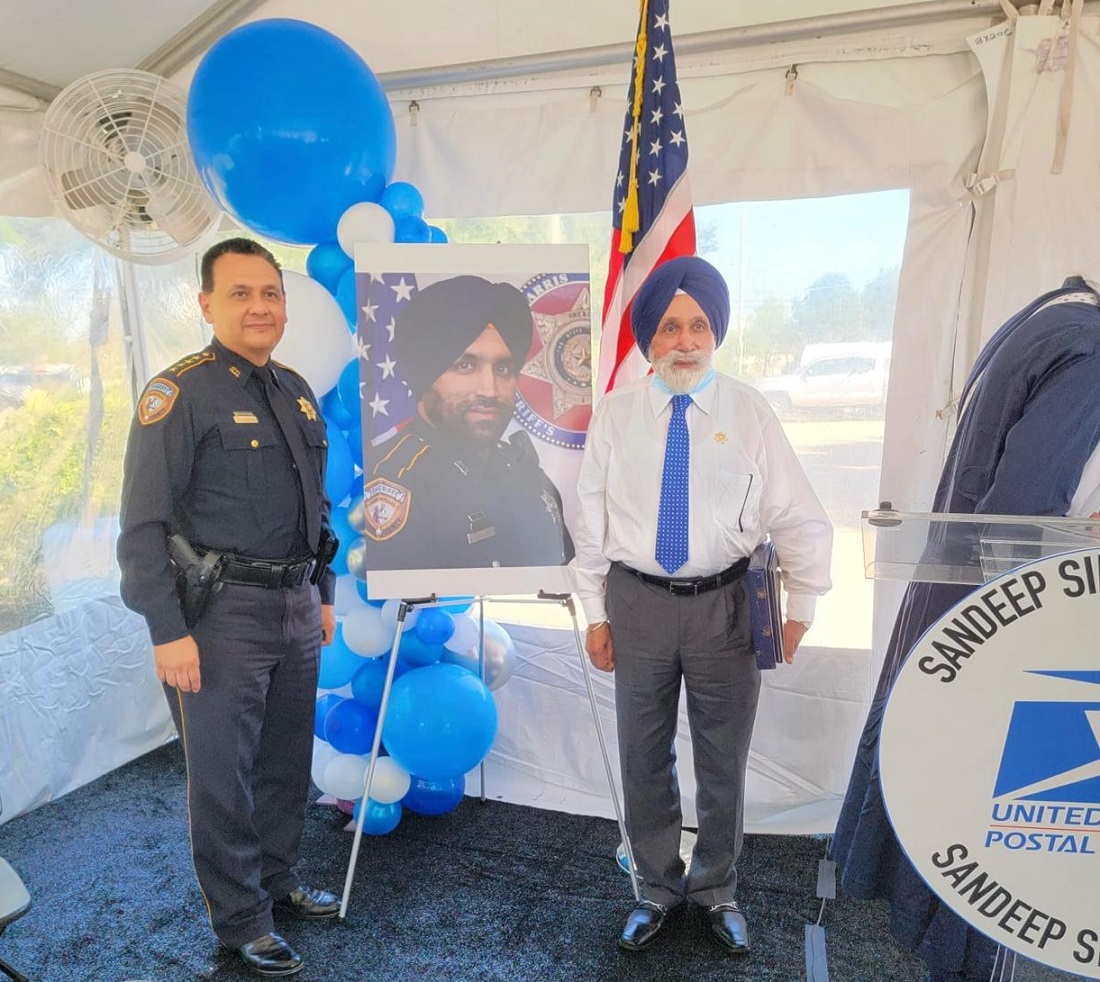 “Since my son was taken from our family in a senseless act of violence, we have received an outpouring of support and love from the greater Houston community.”

These were the words of Pyara Singh Dhaliwal, father of late Deputy Sheriff Sandeep Singh Dhaliwal, who was killed during a traffic stop in northwest Houston, Texas on Sept. 27, 2019.

The family expressed overwhelming emotions as a group of elected officials, law enforcement officers, and Houston community members gathered to honor the fallen hero with a post office naming ceremony.

“We are so grateful and so honored that Sandeep is being memorialized in this way–forever becoming a part of the city that he served faithfully both in and out of uniform, ” added Pyara Singh.

During his life, Deputy Dhaliwal, who joined the Harris County sheriff’s office in 2009, had been a responsible officer and a well regarded member of Sikh community.

Known for securing a historic, first-of-its-kind accommodation to wear his Sikh articles of faith while serving in uniform in 2015, he was widely regarded for breaking barriers for Sikhs and other religious minorities.

As per a bill introduced by Congresswoman Lizzie Fletcher (D-TX); supported by the Sikh Coalition; passed with bipartisan support, including that of Senators Ted Cruz (R-TX) and John Cornyn (R-TX); and signed into law on Dec. 21, 2020, a post office located at Howell Road has been named the Deputy Sandeep Singh Dhaliwal Post Office Building.

“Naming a federal building for Deputy Dhaliwal in his beloved Houston is a deeply meaningful gesture, and we are grateful to Congresswoman Fletcher and the rest of Houston’s congressional delegation for their leadership on this effort,” said Sim J. Singh Attariwala, Sikh Coalition Senior Policy and Advocacy Manager.

“Today, we remember that Deputy Dhaliwal’s legacy is not just his service to the city of Houston, but also the example of his life: that diversity and inclusion make all of our communities, and our country, stronger.”

Fletcher, said, “It has been an honor to lead the effort to honor the life and contributions of Deputy Sandeep Singh Dhaliwal by naming this post office in his memory.

“Deputy Dhaliwal represented the very best of our community: he worked for equality, connection, and community through his life of service to others.

“The Deputy Sandeep Singh Dhaliwal Post Office now stands as a testament to his remarkable and selfless service and I thank our partners at the Sikh Coalition for helping us build a bipartisan coalition to honor Deputy Dhaliwal and his trailblazing contributions to American life,” she said.