Five Sikh hikers in British Columbia, Canada, used their turbans to save two men on their trail who fell into a pool below a waterfall, according to a report.

Kuljinder Kinda and four friends were hiking in Golden Ears Provincial Park on October 11, when they heard that two men had slid on a slippery rock and fallen into a pool above the lower falls. They were unable to pull themselves out.

Kinda, an electrician who moved to Canada from Punjab, India, was reported as saying that a few people came to rescue the two men, but couldn’t and they advised the Sikhs to contact 911. But they didn’t have access to a telephone. Then the five friends came up with the idea of making a rope out of their turbans.

According to NBC, the footage of last week’s incident went viral and has been shared widely. Kinda posted the recorded video on WhatsApp and was picked by hiking networks.

Kinda told NBC Asian America that “they were trying to think how we could get them out, but we didn’t know how to… So they walked for about 10 minutes to find help and then came up with the idea to tie their turbans together.”

Kinda and his friends took off their turbans and other garments to tie the fabric together and form a 33-foot improvised rope. They threw it down and told the two men to tighten it before hauling themselves up.

“In Sikhi, we are taught to help someone in any way we can with anything we have, even our turban,” Kinda said.

Kinda added that he and his friends were not concerned about their own safety at the time. 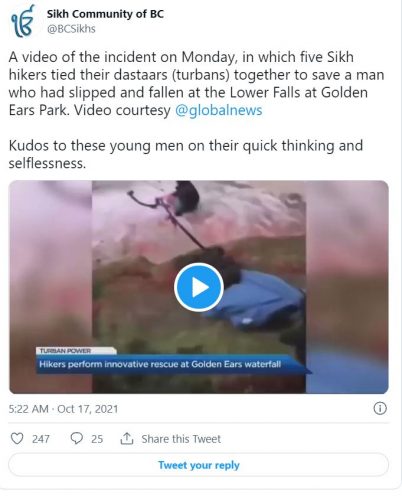 “We just really cared about the safety of the men,” he said. Those two men thanked Kinda and his friends.

By the time Ridge Meadows Search and Rescue’s manager, Robert Laing, who was on duty and reached the area, the hikers had already been rescued.

“We spoke briefly with them but only to make sure they were fine and did not require medical aid,” Laing told NBC. “They did say they did not see the warning signs regarding the hazards of approaching the falls.”

Sikh Community of British Columbia shared the video praising the hikers on Twitter and said, “Kudos to these young men for their quick thinking and selflessness.”