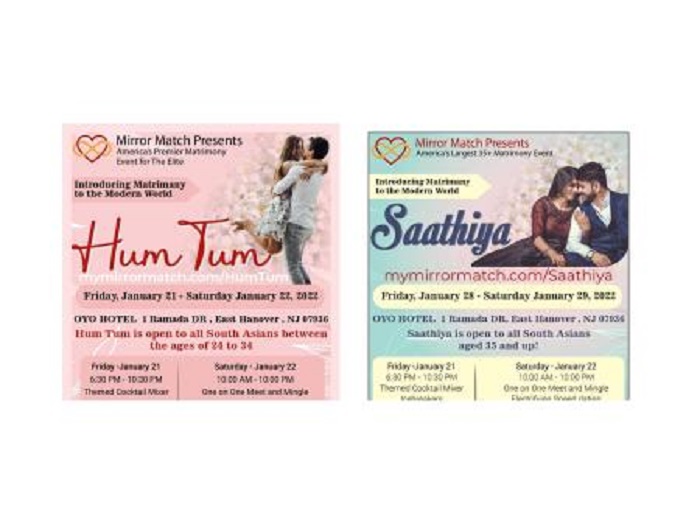 The Indian matchmaking scene has always been a subject of intrigue in the West. Despite the Western fascination with grand Indian wedding parties and lavish costumes, the concept of arranging a match has often been met with skepticism by those who have not been part of the culture.

But now especially catering to the first and second generation Indian Americans, new matchmaking platforms are carefully balancing the Indian concept with a more modernist approach to arrange match making for desi couples in America.

New Jersey based My Mirror Match (www.mymirrormatch.com) is one such platform that is arranging couple meet ups with a very contemporary twist.

In a departure from traditional Indian matchmaking websites that adhered to the stiff expectations of age and profession, the new age platforms are offering a happy flexibility. For instance Mirror Match also organizes matchmaking meetings targeted at South Asians aged 35 and above.

Read: All you single desis out there looking, go on a date, with some help from Intersections Match (June 10, 2014)

Conceptualized by Dhruv Bhatt and Leena Bhatt, the elite service provides tailored consultations and services such as dating profile review and even a date set up including details such as figuring out the best location to create a romantic setting.

Leena Bhatt, talking about her unique matchmaking service says, “Our events are open to all South Asians, irrespective of their immigration and marital status.”

Talking about their tailor made events, Bhatt says, “We are hosting two events in January for women and men that are interested in finding a significant other. We would like to help everyone regardless of their citizenship or marital status. It would be a good opportunity for people to meet like-minded individuals they can connect with.”

But is the desi Generation Z in America ready for a traditional concept of matchmaking with a contemporary touch?

Mira Shah, a 28-year-old, advertising professional in the Greater New York city area says, “Being on a dating website is nothing new for a majority of single men and women in big cities, but I haven’t yet explored the idea of being on a desi matchmaking website.”

“Truth be told, the desi matchmaking has up till now got a lot of bad rap thanks to the notion of arranged marriages that scarcely pay attention to emotional compatibility and focus mainly on professional profiles.

“But yes, if there is something that promises to be different, I am sure single desi origin men and women like me wouldn’t mind giving it a try!” says Shah.