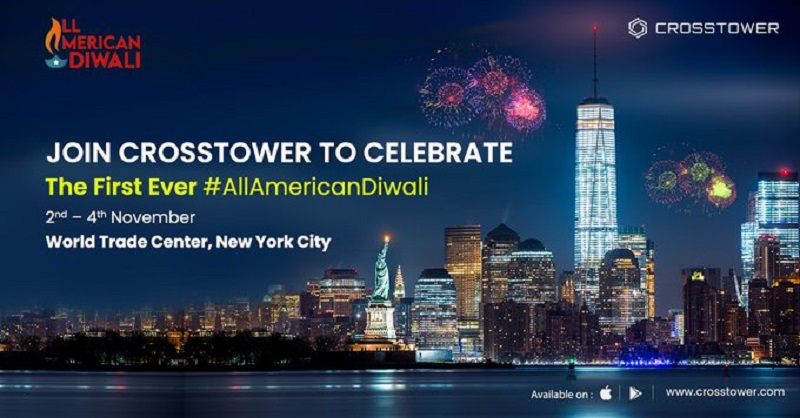 New York City’s iconic World Trade Center will showcase a spectacular digital mural with fireworks over the Hudson River for an amazing three-day All American Diwali celebration for the first time in history.

CrossTower, a leading crypto exchange with presence in both the US and in India, has partnered with the South Asian Engagement Forum for the event from Nov, 2 through Nov. 4, according to a press release.

Combining the American tradition of viewing fireworks with the Indian Festival of lights, a fireworks display will take place on the Hudson and be available via livestream on Diwali Eve, Nov, 3 at 7.30 pm ET.

The World Trade Center podium will be lit up with a grand digital mural displaying beauty, color, and design from 6:00 pm to 2:00am from Nov 2 to 4.

The event is aimed to “inspire Indian Americans to engage their neighbors, colleagues, and friends from a variety of backgrounds in engaging conversations about Diwal,” the release said.

Rahul Walia, Founder of the South Asian Spelling Bee, said, “There is no better symbol of the triumph of resiliency than the World Trade Center and we are very fortunate to be able to bring this message to all.”

“The US has such a huge South Asian population and Diwali being an important festival has given us the opportunity to display lights in the World Trade Centre and fireworks during the festival of lights during the All-American Diwali celebration,” Adams said. “And there is no better place to do it than New York city and we are looking forward to it.”

CrossTower co-founders Kapil Rathi and Kristin Boggiano will also participate in the celebration.

“By highlighting core Indian traditions through universal American values, this grand event aims to make Diwali as beloved to mainstream America as it is in South Asia” the release said.

“CrossTower is privileged to be a partner of the first ever All-American Diwali celebration, especially so soon after our expansion into India,” said Kapil Rathi, Chief Executive Officer and Co-Founder of CrossTower.

“Given that there are 2.7 million Indians in the US, this event combines the American tradition with the Indian Festival and has brought together two biggest democratic countries, the US and India, to celebrate one of the biggest festivals,”

All American Diwali is dedicated to New York’s Finest, as the New York Police (NYPD) and Fire Department (FDNY) are honored throughout the Diwali celebrations, the release said.