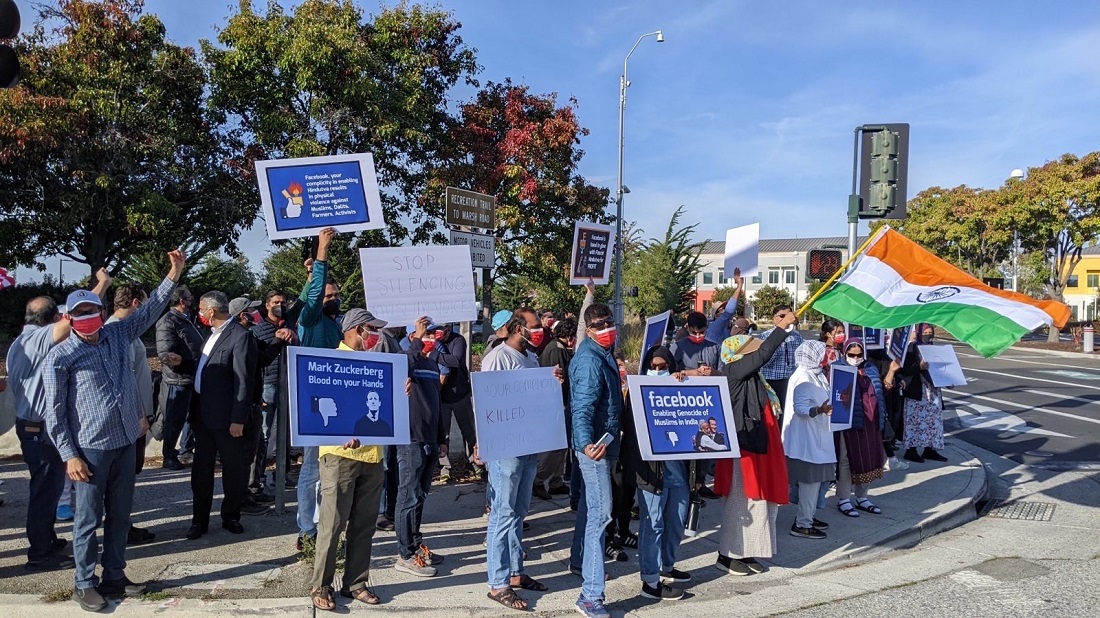 Hundreds of people protested in eight major US cities against Facebook allowing hate speech to be freely posted in India, resulting in what they called “persecution, physical attacks and killings of members of non-Hindu minority religions.”

The protests, organized by India Genocide Watch, featured speakers demanding that Facebook’s founder-CEO Mark Zuckerberg end his “company’s complicity in extreme Hindu rightwing incitement to violence, proliferating on Facebook and WhatsApp, as exposed by whistleblower Frances Haugen,” according to an IGW press release.

Many of the protesters, who can never return to India, have family in India who are targets of state-sanctioned persecution, discrimination and physical violence.

“Facebook provided a platform for the right-wing hate-mongering elements to flourish. Had it taken stringent action on fake accounts things could have been different,” Elyas Mohammed, a protester at Charlotte, North Carolina, was cited as saying.

Shakeib Mashhood, a protester at Houston, Texas, said: “Facebook is becoming a tool to spread hate In India, which is very outrageous. More concerning is that Facebook knew that this was happening but it did not take any action. They did not block it.”

At Chicago, Syed Shoaib Qadri said, “We want accountability from Facebook for its criminal behavior.”

“Facebook is enabling inflammatory and violent rhetoric against Muslims in India and around the world,” alleged Musaddique Thange, a protester at San Diego, California. He demanded that Facebook should designate RSS, Bajrang Dal and all its affiliates as dangerous and terrorist organizations.

Zameer Khan, organizer of the Atlanta protest, declared: “Public protests and demonstrations are needed to begin to galvanize the American people and politicians especially into taking action against Facebook for poor management of its social media platform.”

Some of the posters and placards held up by marchers said: Facebook enables racism and fascism; undermines democracies; promotes islamophobia; Facebook hate speech rules help BJP in India and it failed its users.

India is Facebook’s biggest market, with at least 340 million Facebook accounts and 400 million WhatsApp users. “The social media giant has increasingly prioritized business interests in India, failing to act against the tsunami of hate and violence enabled by its platforms,” IGW alleged.