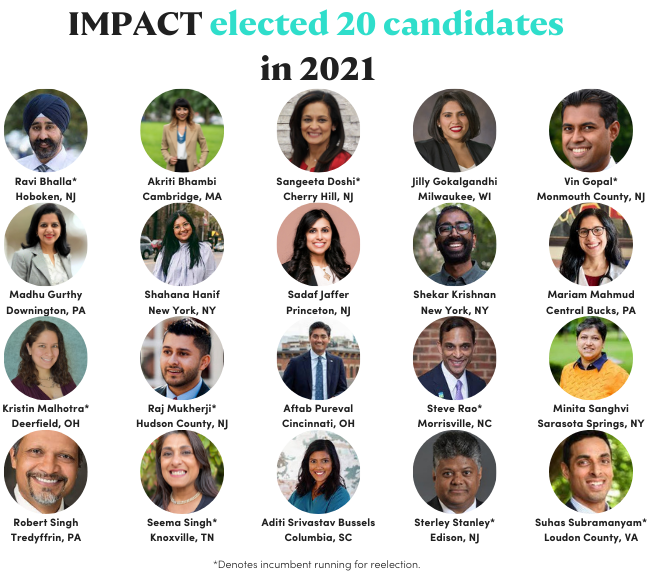 As many as 20 South Asians, all but a couple of them Indian Americans, won in the November polls pulling off several historic victories from school boards to state legislatures.

“We are thrilled to share that 20 of our endorsed candidates won their elections last month,” Neil Makhija, Executive Director of Indian American Impact, a leading community organization stated.

“Many of them defied national trends and pulled off historic victories, building our community’s political power and representation in public service,”  he said noting, “Ten (50%) of our winning candidates were women and eleven (55%) were challengers, elected to office for the first time.”

“They will all be powerful advocates for their respective communities and give a voice to many that have been traditionally left out of the conversation,” Makhija said.

Six of the South Asian victories came in New Jersey, three each in New York and Pennsylvania, two in Ohio and one each in North Carolina, Massachusetts, South Carolina, Tennessee, Virginia and Wisconsin.

Among the key victors were Aftab Pureval who won his election for Cincinnati mayor, becoming the first Indian American Mayor elected in Ohio.

In New Jersey, Ravi Bhalla, who was elected State’s first Sikh mayor in 2017 won his second term in Hoboken unopposed.

Raj Mukherji and Sterley Stanley were reelected to the state assembly from Hudson County and Edison (East Brunswick) respectively.

In Ohio, besides Pureval, Kristin Malhotra was reelected Township Trustee in Deerfield.

In Wisconsin, India born Jilly Gokalgandhi was elected School Board director in Milwaukee.

“While not everyone was elected, we are so thankful to the dozens of talented and hard-working candidates who ran for office this year. We hope they too will run again,” Makhija said noting Impact is already working on its 2022 slate.

(Correction: A previous version of the story misspelled Saratoga Springs as Sarasota.)