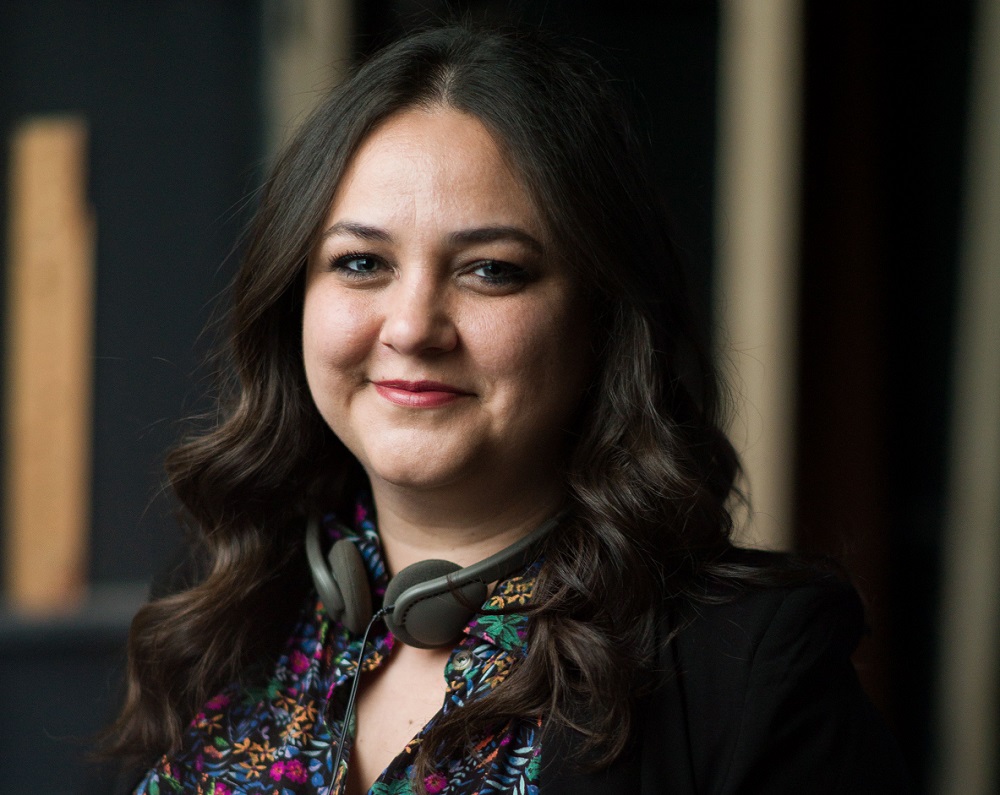 Los Angles based writer/director Maureen Bharoocha, made her feature debut with an arm wrestling comedy ‘Golden Arm’, which premiered this year. As a woman of color Bharoocha has had many inspirational moments in her career.

From being a segment director on Jimmy Kimmel Live to exploring different genres of comedy such as dark and horror comedy with her feature films like ‘The Prank’ and ‘Tina’s 40th Birthday Party,’ Bharoocha has really shown the possibilities in entertainment for women of color and ethnic backgrounds.

She is currently in news for directing an episode in the second season of ‘Saved by the Bell’ that premiered Nov. 24 on Peacock. Maureen is part of NBCU’s Female Forward program that aims to create gender parity in scripted television.

Read: Bharati Mukherjee interview archive: ‘I lift the lid of my laptop and I become the persons I am writing about’ (February 2, 2017)

She takes out time to talk with the American Bazaar about growing up in America as half Irish Catholic and half Indian-Pakistani Burmese Muslim and about making the cut in American entertainment as a woman of color.

AB: You are one of the few, even rare, South Asian directors exploring various genres of comedy in entertainment — dark comedy, horror comedy, arm wrestling comedy. Can you talk to us more about it?

MB: I was a huge fan of movies growing up and obsessed with all genres. I think it’s because both my parents are cinephiles but love opposite types of movies.

My dad is a die-hard western fan and watches lots of action flicks and silly comedies. My mom is a sucker for anything scary or thrilling and can’t pass up dramatic love stories. So I ended up watching a wide variety of movies with both of them.

They gave me the movie buff bug so I went on to major in film studies in college. Basically, I have spent my whole life watching all types of movies and infusing what I love into my own films today.

I like to walk a fine line in regards to tone and I find the best way to do that is to mash up genres.

AB: You directed an episode of “Saved by the Bell” as part of NBCUniversal’s Female Forward directing program. How do you think going through the program helped prepare you to make the jump from film to episodic TV?

MB: NBCUniversal’s Female Forward program was life changing. The program opened a door that I had been trying to unlock for years. My background is in directing  features and late night TV and, even with years of experience, breaking into episodic TV was not easy.

NBCUinversal’s Female Forward Program introduced me to the people I had trouble meeting previously. The program provides insight from the executives and other directors on how to navigate the pitfalls of episodic directing: the hierarchy, the tight schedule, the need to balance your personal style with that of the show.

It also provided an incredible support system for a first time episodic director. And the fact that the show runner chooses which women direct their show based on previous work and a meeting made earning an episode of Saved by the Bell even more meaningful.

AB: Golden Arm premiered earlier this year. Tell us more about that project.

MB: Golden Arm is a movie near and dear to my heart. Golden Arm is an arm wrestling sport/buddy road trip movie with lots of laughs and heart and a timeless quality.

Mary Holland and Betsy Sodaro star in the comedy which is ultimately a love story about two best friends and finding your inner strength after life knocks you down.

It was set to premiere at SXSW 2020, but we all know how that year ended. It was bought by HBO and had a theatrical run this past year. I am incredibly proud of the movie and hope more people discover this little gem on Amazon and Apple.

AB: The pandemic had a far reaching effect on most industries, but especially on the entertainment industry. What did the pandemic, if anything, change for you?

MB: The pandemic changed my perspective on what I wanted to put my energy toward. It forced me to refocus on what stories I truly want to tell and I keep that in mind as I create.

I love directing and missed working during the pandemic but I took the forced downtime as an opportunity to write more and do some soul searching.

Nothing in this business is a guarantee so checking in with myself was a way to confirm I had my creative priorities straight. It is easy to lose light of your goals when you are grinding at it for a long time.

It also reaffirmed that the only way to survive in this business is creating real lasting relationships and friends. I am lucky that I have many peers who I trust and can talk to when things get tough. Connections are what gets you through rough times and giving back and supporting one another is what I truly value in this life.

AB: Tell us about being a segment director on Jimmy Kimmel Live. Can you give us a behind the camera view on what goes into making a show watched by millions?

MB: Directing segments on Jimmy Kimmel Live! is truly the best gig in town. There is no bigger rush than directing comedy that  has been written, shot and edited in one day with instant feedback from a live studio audience.

The show has been on the air for 18 years – which is insane to think about – and  getting to work with Jimmy is the honor of my lifetime. He is the most dedicated professional I have ever had the pleasure to work with and getting to witness how his brain worked was an invaluable experience.

And the show has an incredible crew! I made lasting friendships there and cannot wait to work with everyone on that show again at some point in my career.

During the three seasons I was on the show, they had four segment directors, Brad Morrison, Will Burke, Jon Kimmel, Danny Jelineck, and the show director Andy Fisher so it was fun to mind meld with other directors on ideas.

AB: You are half Irish Catholic and half Indian Pakistani Burmese Muslim, tell us about this interesting confluence of cultures and how it shaped you?

MB: I love having an unusual family background. Since both my parents are one of seven children, practice their own religion and had mothers who laid the guilt on thick, I am product of that combo.

So, suffice to say, there is a cast of colorful characters that have inhabited my life and every single story I tell or character I write has qualities of a member of my large and complicated family.

Growing up torn between these two worlds also gave me an understanding of how to connect and communicate with people from any background. It is a skill that has become my default.

When I meet someone, I instantly try to figure out how I can relate to them or what we have in common or what interests we share. This survival technique is something I have honed over time and now see as a rare gift.

AB: Growing up with your multiracial background, did you feel like you had to navigate different worlds depending on who you were surrounded by? Did that lead to any feelings of inclusion or exclusion as a child?

MB: As a kid, it all seemed so simple to me. I am half my mom and half my dad. I am half Catholic and half Muslim. I am half Irish and I am half Gujarati.

I never wanted to leave out or forget one half of myself but when others imposed their opinions on who I was, things got complicated. I remember one day a kid at school said you can’t be Catholic and Muslim and I started arguing with them, saying “Yes, I can. I am.”

I am half my mom and half my dad. I can hold two truths inside of myself. As I grew older and started to define who I was outside of my parents I have to admit those identity markers became harder to defend and clarify for others.

I got a lot of “but what do you believe” or “But, how do you see yourself” or “which culture do you identify with more” and  “you don’t look South Asian” or “Wow you know how to eat with your hands, I didn’t realize you actually knew how to eat Indian food.”

It was something I thought didn’t bother me as a kid but as an adult I see that I was often trying to justify who I was to others or prove I belonged to one group or another.

I gravitate to other mixed kids or other South Asians and love their culture but feel judgement for not knowing their language or culture “enough.”

I don’t see it as negative though, I see it as my ability to relate to others who don’t feel “enough” and that feeling happens across all cultures and races. I would say that it is an internal conflict we all face as Americans.

AB: And lastly, as a woman of color in America, what has the journey towards your career in entertainment been like? What are some challenges and opportunities you faced?

MB: My journey has been long but I have enjoyed every minute of it. As I look back from what I feel is my midpoint, I am so proud of myself for pursuing a goal I set for myself as a teenager.

I worked incredibly hard and have a large body of work behind me but I know I have an even greater amount to achieve ahead of me. The opportunities were there and I took every chance I got.

Read: Indra Nooyi: I focused on job at hand, over-prepared and over-delivered (November 25, 2021)

I used to work behind the counter at Sprinkles Cupcakes before I convinced the owners to create a position in their company for me as Branded Content Creator.

I’ve collaborated with many people and built my tribe of creatives. I will continue to bring the people I love and respect to projects, advocating for others when I can and pushing myself to be better.

I didn’t realize how hard this journey would be and didn’t always see the real obstacles women face but I will never give up and will continue to grow and evolve.

This business isn’t for the faint of heart but if we all work on making it a place that supports underrepresented voices and fresh ideas, it will make the journey a little easier.

I hope to one day help the younger generation come up as so many helped me. You need to believe in yourself  and your work because it is easy to lose sight of yourself if you focus on what others are telling you. Trust your gut.