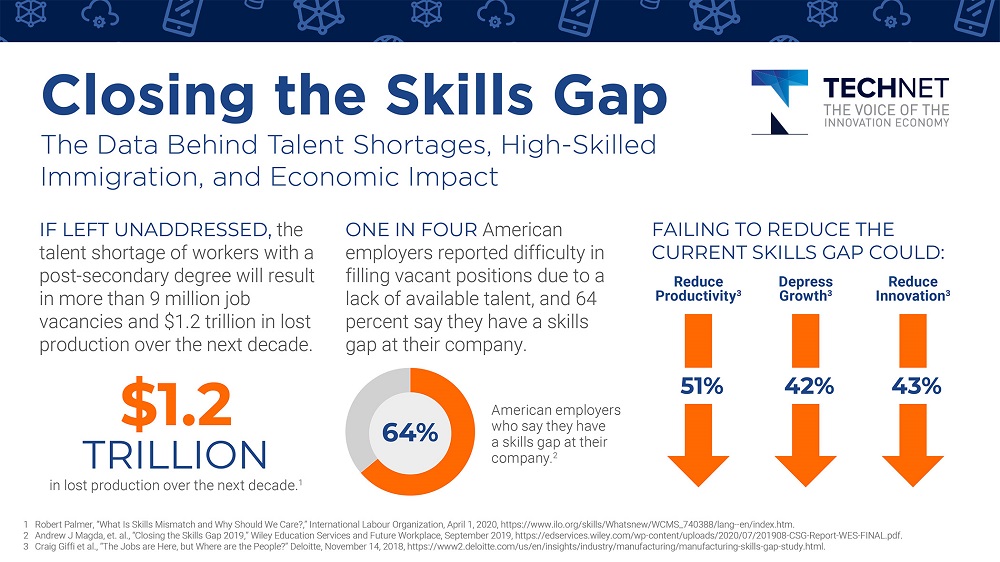 Increasing high-skilled immigration will result in overall job creation, increased innovation, and economic growth across America, according to a new report by TechNet, a network of innovation economy CEOs.

The report examined the severity of the current skills gap that exists in the United States, the impact it’s having on the economy, and how increasing high-skilled immigration can help fill talent shortages in communities across the country.

If left unaddressed, the talent shortage of workers with a post-secondary degree will result in more than nine million job vacancies and $1.2 trillion in lost production over the next decade, the report found.

Despite the positive effects of immigration, current H-1B visa guidelines have remained unchanged over the past 14 years despite the growth of the US economy, it noted.

However, there is bipartisan support in Congress to reform US immigration policy and increase high-skilled immigration, noted the report, “Closing the Skills Gap: The Data Behind Talent Shortages, High-Skilled Immigration, and Economic Impact.”

“Throughout our history, immigrant innovators, entrepreneurs, and workers have come to the US, started businesses, created jobs, fueled innovation, and grown our economy,” said Linda Moore, President and CEO, TechNet.

“In fact, nearly half of America’s Fortune 500 companies are founded by immigrants or the children of immigrants, with those companies employing 14 million people,” she noted.

“We are in a global race for talent. The United States must welcome the world’s best and the brightest, and their families, so they can put their talents to work for the American economy.”

Describing immigration provisions included in the House reconciliation package as “the first solution in years to help businesses strengthen our economy by filling immediate vacancies,” Moore hoped that these provisions will remain in the Senate reconciliation bill.”

The latest data shows there are more than 10 million current job openings across the US with more than seven million people unemployed, a gap of three million. The inability to find workers is negatively impacting businesses bottom lines. the report said.

More than 80 percent of small businesses reported a loss of sales due to labor shortages, with 19 percent experiencing serious losses. Businesses are also struggling to find the candidates they’re seeking.

TechNet’s report showed 64 percent of employers report a skills gap at their company and that failing to reduce the current skills gap could reduce productivity by 51 percent, depress economic growth by 42 percent, and reduce innovation by 43 percent.

To help fill the talent shortage, the US must increase high-skilled immigration across the country, it said.

The report underscored that while education reform is critical for narrowing the skills gap in the future, education is a two-decade investment and will not solve the current US skilled labor shortages.

With the US not producing enough skilled degree holders to fill demand, expanding high-skilled immigration is the best solution to shrink the current skills gap and contribute to new business development and economic growth.

The report also showed that expanding immigration does not come at the expense of American workers. Data from the report showed immigration boosts employment and earnings potential for American employees.

The report found that immigration expands the federal, state, and local tax base, increases entrepreneurial activity and innovation, creates more jobs and opportunities for Americans, and strengthens America’s position as a global leader.

The report analyzed the state-by-state prevalence of immigrant entrepreneurs and jobs generated from skilled immigration in academics and the workforce.

The data showed that high-skilled immigration resulted in overall job and economic growth, increased productivity and innovation, and a more collaborative workforce culture in states across the country.