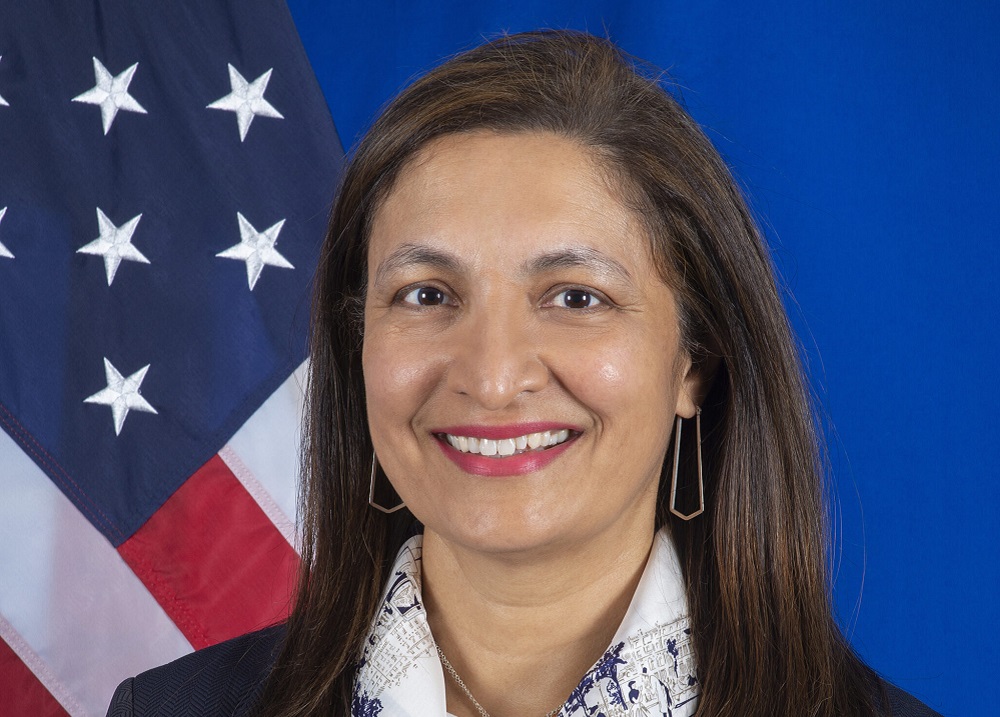 The Dalai Lama has expressed the hope that Uzra Zeya, the newly appointed US Special Coordinator for Tibetan Issues will be able to contribute significantly towards improving the situation of the Tibetan people.

Congratulating the Indian American diplomat on her appointment, the Dalai Lama wrote to her Thursday saying he remained “concerned about the survival of the Tibetan identity, our distinctive culture and heritage and the protection of Tibet’s fragile natural environment.”

“Although I have handed over political authority to an elected Tibetan leadership,” the Tibetan spiritual leader who is living in exile in Dharamsala, India, said he remained concerned about these issues.

“I am pleased to see that in your first remarks, you mentioned that these will be your priorities,” he added in a missive to Zeya, Under Secretary for Civilian Security, Democracy, and Human Rights, who has been given an additional important role.

Daughter of immigrant parents from India, Zeya has been specifically charged by Secretary of State Antony Blinken with promoting a dialogue between Beijing and the Dalai Lama and Tibetan leaders for a negotiated agreement on Tibet.

“As I have had the opportunity to express to successive American leaders,” the Dalai Lama wrote, “continued and consistent American support has been a source of great encouragement to Tibetans in our peaceful struggle for freedom and dignity.”

“As you are aware, there has been widespread international interest in and support for the peaceful struggle of the Tibetan people, whose rich culture of non-violence and compassion has so much potential to contribute to the world,” he wrote. “ I remain confident that in the long term, the power of truth will prevail.”

The Dalai Lama said he looked forward to meeting Zeya “and exchanging views on issues that can benefit from your support and initiatives. I am sure you will be in close contact with our elected Tibetan leadership.”

The Tibetan leader stated that he is encouraged to see that in addition to co-ordinating Tibetan issues, concern for democracy is also part of Zeya’s portfolio and that the US recently held a democracy summit.

“I firmly believe the United States can play a leadership role in promoting awareness of the fundamental values of democracy, freedom, and human rights,” he concluded.

Born in the US to parents who immigrated from Bihar, Zeya is a veteran US diplomat who has served as political minister-counselor in New Delhi during her distinguished 27-year foreign service career.

“Specifically, she will promote substantive dialogue, without preconditions, between the Government of the People’s Republic of China (PRC) and the Dalai Lama, his representatives, or democratically elected Tibetan leaders in support of a negotiated agreement on Tibet,” he said.

“She will promote respect for the human rights and fundamental freedoms of Tibetans, including their freedom of religion or belief, and will support efforts to preserve their distinct historical, linguistic, cultural, and religious heritage.”

“Zeya will further support US efforts to address the humanitarian needs of Tibetan refugees and diaspora communities, including those in the United States who have faced threats and intimidation instigated by the PRC,” Blinken said.

“She also will promote activities to protect the environment and sustainably manage the water and other natural resources of the Tibetan plateau.”

“Consistent with the Reciprocal Access to Tibet Act of 2018, she also will seek to increase access to Tibet for US officials, journalists, and other citizens,” Blinken said.

“Zeya will work closely with Tibetan cultural, religious, and political leaders, the US Congress, international allies and partners, and civil society representatives on these matters,” he said.

“This designation demonstrates the Administration’s commitment to advance the human rights of Tibetans, help preserve their distinct heritage, address their humanitarian needs, and meet environmental and water resource challenges of the Tibetan plateau,” Blinken said.