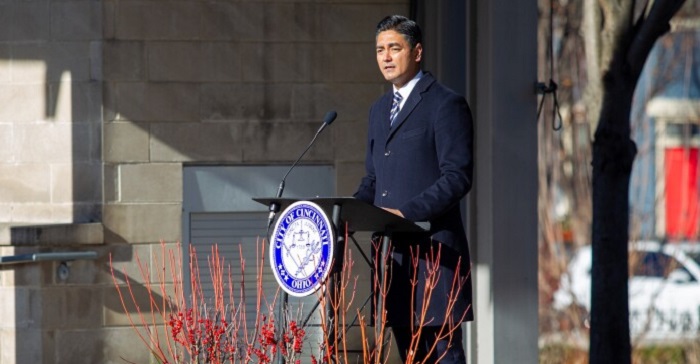 Son of an Indian father and a Tibetan mother, Aftab Pureval, Tuesday created history as he was sworn in as the first Asian American mayor of Cincinnati, Ohio, shortly after 1 pm in freezing weather.

In a topcoat and an affable mood, Pureval, 39, came to his historic inauguration as the city’s 70th mayor in an unusual mode of transport – riding a bicycle – a definite departure from ceremonial norms, as WLWT5 put it.

“In all my interactions with Tibetans I have been encouraged to see that, despite living in new circumstances by and large they and their children are able to maintain their sense of identity while contributing to the development of their adopted country,” he wrote in the letter dated Dec 7.

“While being dedicated in their service for the benefit of others, I hope that they will be able to show an especially warm-hearted concern for the less fortunate members in their constituencies,” added the Tibetan leader who is living in exile in India since 1959.

Pureval said he was thrilled by the letter – and invited the Dalai Lama to visit Cincinnati.

“As a Tibetan-American, it is a special honor to be recognized by His Holiness. I am inspired by the @DalaiLama’s words on our shared concern for our most vulnerable neighbors, and it would be my honor to introduce His Holiness to the Queen City,” he tweeted.

Pureval recounted his father’s belief in a better land, WLWT5 reported. Coming from a refugee family to a mayoralty sounded like his guiding star for the office as he made a pledge. “I will not waste this opportunity,” he said. “I will not waste it. Thank you so much.”

“Cincinnati, a great new chapter lies before us. There will be challenges and hard decisions, but I commit to you this: I will work hard every day to make you proud of our city,” Pureval tweeted shortly after his inauguration.

In the November election, Pureval defeated David Mann, a city councilor and fellow Democrat who previously served as mayor and in Congress, 66% to 34%.

“Words can’t express how honored and excited I am to be the next Mayor of Cincinnati,” Pureval then tweeted. “Tonight, we made history! Let’s get to work!”

He spoke in his acceptance speech about his parents’ coming to the US as refugees from India in search of a better life for him and his brother.

Read: Cincinnati swears in its first Asian-American mayor, along with one of its most diverse councils yet (January 4, 2022)

“Because of that incredible decision, my family went from refugees to now the next mayor of Cincinnati,” Pureval said. “Folks, that story only happens here in Cincinnati.”

“Cincinnati is a place where no matter what you look like, where you’re from, or how much money you have if you come here and work hard, you can achieve your dreams. I achieved mine. Thank you so much.”