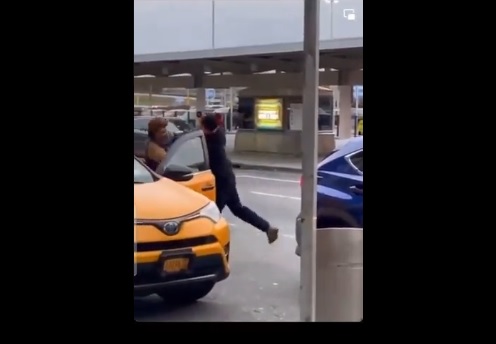 The news of racist attacks and slurs towards people of color every now and then remains a bitter truth in America, even as the statistics and television stress on increasing diversity.

The new year began on a rough note for a New York based Sikh taxi driver, Mr. Singh, (the victim has requested to maintain anonymity) when he went about on what he thought was a normal work day for him.

But Mr. Singh was physically attacked and berated outside of his cab at JFK airport, according to the Sikh Coalition, a Sikh-American advocacy group.

The incident happened during the morning hours on Jan 3, when Mr. Singh had parked his cab at the Terminal 4 taxi stand at the busy John F Kennedy Airport in New York. Suddenly another driver blocked his vehicle in.

When Mr. Singh picked up a customer, he stepped partway out of his car to ask the other driver to move. The other driver attempted to hit Mr. Singh with his own car door; he then began repeatedly punching Mr. Singh in the head, chest, and arms, causing his turban to become unraveled and fall off.

Not only this, the attacker called him “turbaned people” and shouted at him to “go back to your country.”

Part of the attack was captured in a viral video that circulated on Twitter last week. However, out of respect for Mr. Singh’s privacy (given that his turban was knocked off) and in accordance with his request that he not be publicly identified, the American Bazaar is not sharing that footage at this time.

Mr. Singh, who has sought the help of Sikh Coalition, said: “I was shocked and angered to be assaulted for doing nothing, but minding my own business while working–no one should experience such hate. I am hopeful that the police can identify, arrest, and charge the person who attacked me so that I can move forward.”

Sikh Coalition has stepped in to provide free legal guidance as the investigation into his attacker moves forward.

Mr. Singh filed a report with the Port Authority Police Department (PAPD) immediately after the incident. The Sikh Coalition is currently working to ensure that the report paints an accurate picture of the attack given the language barrier during the initial conversations.

“We have every expectation that bias will be considered as a factor in this outrageous attack, given the evidence of what the other driver said and did to Mr. Singh,” said Amrith Kaur Aakre, Sikh Coalition Legal Director.

Sikhs in the United States continue to experience bias- and hate-driven attacks on account of their visually identifiable articles of faith (including dastaars) as well as perceptions about their country of origin, the advocacy group says.

According to the most recent FBI data, Sikhs remain in the top three most frequently targeted groups for religiously-motivated hate crimes and bias incidents nationwide.

Sikh Coalition says in its experience, taxi and rideshare drivers in particular are at a heightened risk of kinds of violent attacks.