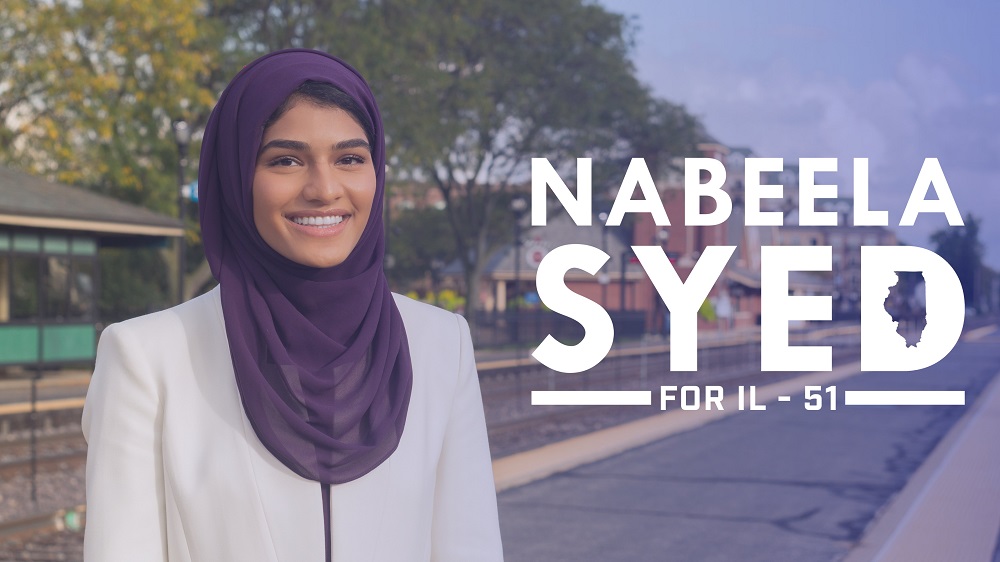 If elected, she will be the first South Asian woman in the state legislature

Indian American community organizer Nabeela Syed, who is running for State Representative for Illinois’s 51st House District as a Democratic candidate, has raised $100,000 ahead of the June 28 open primary.

If elected, Syed working for a non-profit in digital strategy supporting a variety of their civic engagement efforts, will be the first South Asian woman in the state legislature.

“Illinois has yet to elect a South Asian woman to the State Legislature, but I know how important diverse representation is to making policy that works for everyone,” she said in a message on her website announcing her run.

“Knocked on the door of a voter who said, ‘It feels like my daughter is running for office,’” she tweeted Jan 20. 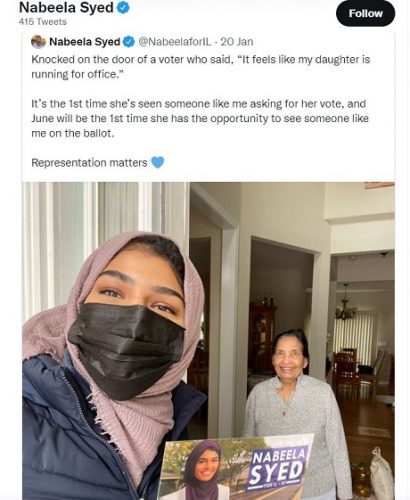 Earlier, after raising $100,000 she thanked her supporters Jan 18 with a tweet saying, “Thanks to you we shattered our first fundraising goal.”

“When we launched in October, we heard that raising the resources to flip this district would be incredibly hard — that someone like me, a young woman of color, would need to raise even more money to be taken seriously, she noted.

Born and raised in Palatine, a northwestern suburb of Chicago, Syed said, “I’m running to build a better Illinois for residents today and tomorrow — an Illinois with a strong economy, sustainable infrastructure, and affordable healthcare and higher education.”

Syed has been endorsed by Democratic state Rep. Theresa Mah, who said Syed “has a track record of mobilizing voters, especially young voters and voters of color, which will be critical for our party in 2022.”

A skilled organizer, Syed has been an active voice for her community, especially those who are underserved and underrepresented in government institutions, according to her website.

“From knocking on doors to help elect Democrats in Schaumburg and Palatine to organizing Asian American voters to flip Senate seats in Georgia, Syed has worked to advance progressive causes on both a local and national scale,” it said.

Professionally, Syed has worked with a variety of progressive organizations, including EMILY’s List, to raise money to elect Democrats to Congress.

The civic engagement efforts of the non-profit she works for currently include voter mobilization, ending sexual assault on college campuses, and promoting gender equity. Syed has also been engaged in her community, serving as a mentor for youth as a high school debate coach.

She is also active in her religious community at the Islamic Society of Northwest Suburbs and is a strong advocate for promoting interfaith dialogue and empowering young Muslim women to lead.

Syed graduated from the University of California, Berkeley with a degree in Political Science and Business Administration, where she served as the president of a pro-bono consulting organization assisting local businesses and nonprofits.