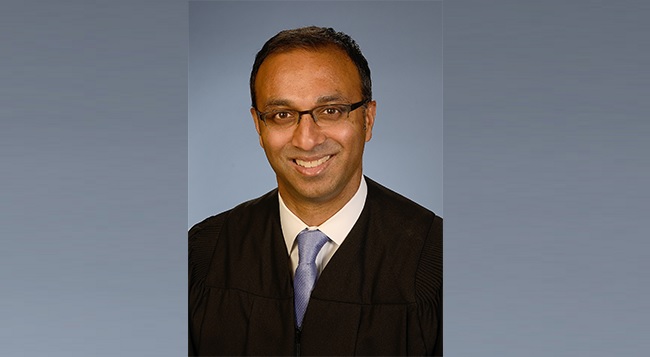 Hip hop-loving Amit Mehta, who listens to Jay-Z, Kanye West, Drake and Eminem, ruled against Trump in 2019 too

Indian American federal judge Amit Mehta has ruled that a landmark series of lawsuits can proceed against former President Donald Trump over his actions leading up to the Jan 6 assault on the US Capitol.

Trump’s status as president at the time doesn’t make him immune from being held to account in court over his role in the events, US District Judge Mehta ruled Friday.

The suits allege Trump was involved in a civil conspiracy to disrupt the election.

“From these alleged facts, it is at least plausible to infer that, when he called on rallygoers to march to the Capitol, the President did so with the goal of disrupting lawmakers’ efforts to certify the Electoral College votes,” Mehta wrote as cited by the Journal.

“The Oath Keepers, the Proud Boys, and others who forced their way into the Capitol building plainly shared in that unlawful goal,” Mehta, an Obama appointee, added.

“A civil conspiracy need not involve an express agreement; so, the fact that President Trump is not alleged to have ever met, let alone sat down with, a Proud Boy or an Oath Keeper to hatch a plan is not dispositive,” he wrote.

Mehta also dismissed some of the claims against allies and family members of Trump—ruling that the plaintiffs couldn’t proceed in their claims against Trump’s lawyer Rudy Giuliani and his son Donald Trump Jr.

Mehta’s ruling also permits Trump to be sued on the grounds of negligence, aiding and abetting assault, and several other charges.

Mehta disagreed with arguments made by Trump’s lawyers that his speech before the riot on Jan 6 was protected by the First Amendment and was delivered as part of his official actions, for which presidents generally enjoy legal immunity.

Specifically, Mehta concluded that Trump’s calls to “fight like hell” and other exhortations made shortly before telling them to “walk down Pennsylvania Avenue” were potentially words of incitement.

This is not the first time that Mehta has ruled against Trump. Back in May , 2019 Mehta ruled against the then President’s attempt to block House Democrats from getting his financial records.

Born in the city of Patan, in northern Gujarat, India, Mehta’s parents Ragini and Priyavadan Mehta moved to the United States when he was one year old.

Mehta grew up in Reisterstown, a suburb of Baltimore, where he attended Franklin High School.

After earning a Bachelor of Arts degree from Georgetown University in 1993, he went on to receive a Juris Doctor from the University of Virginia School of Law in Chancellorsville.

Mehta began his legal career at the law firm of Latham and Watkins, where he served as an associate for a year. In 1998, he went to clerk for Judge Susan P. Graber of the United States Court of Appeals for the Ninth Circuit.

A year later, Mehta returned to private practice joining the law firm of Zuckerman Spaeder, LLP as an associate.

In 2002, he joined the Public Defender Service for the District of Columbia as a staff attorney, defending indigent clients charged with felonies and misdemeanors.

On July 31, 2014, President Barack Obama nominated Mehta as a US District Judge for the District of Columbia. On June 1, 2021, Chief Justice John Roberts appointed Mehta to the US Foreign Intelligence Surveillance Court.

Read: Judge says Trump could be culpable for January 6 and says lawsuits against the former President can proceed (February 19, 2022)

Mehta is a self-confessed fan of hip-hop, listens to Jay-Z, Kanye West, Drake and Eminem.

In the footnote to a copyright infringement case in 2015, he wrote: “This court also does not consider itself an ordinary ‘lay person’ when it comes to hip-hop music and lyrics.

“The court has listened to hip hop for decades and considers among his favorite musical artists, perhaps as a sign of his age, Jay-Z, Kanye West, Drake, and Eminem.”