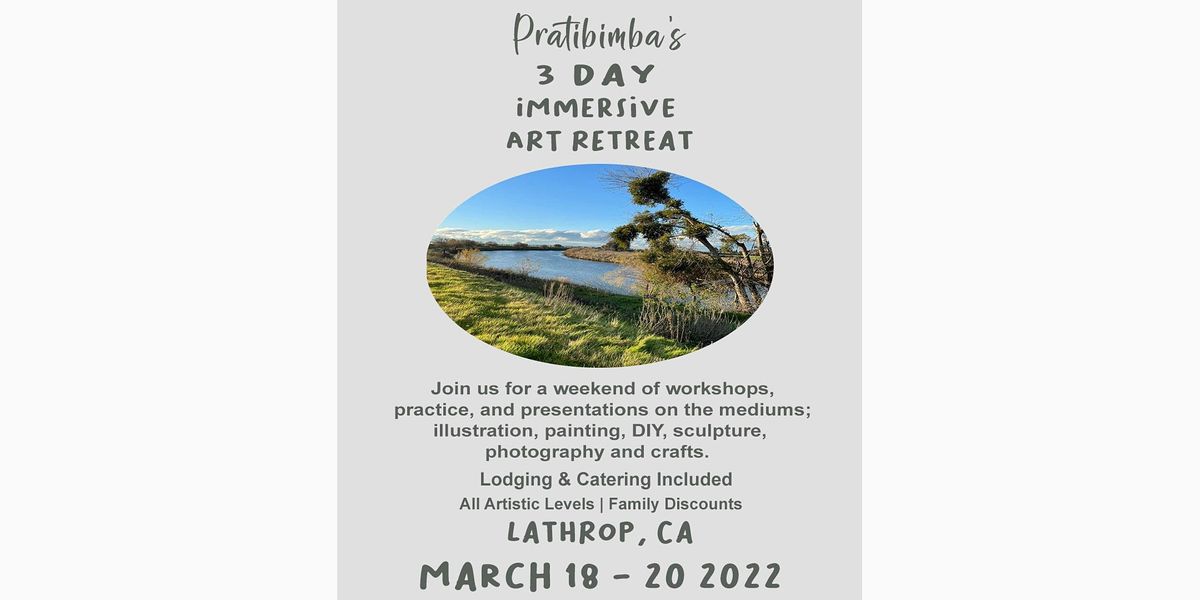 The last couple of years have been a learning curve for everyone who enjoyed interactions and social meet ups. As Covid pandemic goes on a downward slide, some talented artists of color got together to reclaim the lost creative time.

Spread over three-days from March 18 to 20, the Pratibimba retreat is open to all artists of any level, art lovers, individuals and families looking to bond in a meditative space with other like-minded people.

The retreat at River Islands near the scenic San Joaquin river delta will feature art classes and workshops in various modalities such as painting, drawing, illustrating, and sculpting.

Tibrewala, an award-winning artist, who grew up in the vibrant city of Jaipur, Rajasthan, and closely observed ancient Indian art forms sees this retreat as a perfect opportunity to impart the wealth of ancient art forms such as Warli, Kalamkari, Mughal miniature paintings etc. to the West.

Tibrewala has had successful solos at venues like University of Illinois. She has also served as an adult art education advisor at Brooks’s Museum.

The workshops helmed by some more Indian American artists would include miniature sculpture, drawing, and astrophotography. Mornings will begin with early meditation and yoga followed by a day of creating.

Talking about the retreat Tibrewala says, “Yoga has been able to make way into American mainstream. Today it doesn’t matter whether you are in a tiny suburban hamlet or in a big city in the US, chances are you will find a Yoga studio.”

“While this impresses me as an artist, I also want to educate the West on the origins of yoga in the form it existed in ancient India,” she says. “Through stories and my art work I want to also put the spotlight on some of the richest art forms that originated in India.”

“A lot of Westerners are fascinated by things like mandalas or Mughal art but they do not know where to look for to learn more about these art,” Tibrewala says. “As an artist of Indian heritage I take it as my responsibility to bring our rich culture to the world.”

Sabrina Davidson, a certified hypnotherapist and visual artist who studied at the prestigious San Diego State University will bring along her experience in sculpture, ceramics, illustration and painting.

Talking to The American Bazaar about her participation in the retreat she says, “Art has always been a sacred practice and a safe space to me. I often set my timer, tune out the world, and play – it’s brought much stillness to a sometimes-chaotic world.”

“The importance of this retreat lies in its ability to blend Western and South Asian art styles and share them with participants – I hope they will enjoy being in community together for three days of celebrating creativity, delicious food, and respite.”

“Beyond learning something new, I’m excited for retreat goers to take home completed works for their portfolio or wall. I hope this retreat is invigorating for everyone it touches,” Davidson says.

Other artists who bring in their unique skillsets to benefit the retreat participants include, Bay Area based Rachna Tiwary, who practices indigenous art forms of India such as Madhubani painting, bheel art, Gond art.

Having migrated to the US in 200, Tiwary has exhibited her curated works at places like Harvard Children’s Hospital. She says, “Art Retreat to me is an opportunity to reach out to wider audience, disconnect with the hustle of daily lives and be part of this immersive experience- as instructor and as learner.”

Biplab Chattopadhyay, an engineer by day and an astronomy enthusiast at night, will bring along the knowledge of intriguing subject of astrophotography for the participants.

“Sujata is hosting this art retreat in the backdrop of the tranquil California town Lathrop. I am participating as an instructor to teach fundamentals of Astrophotography,” he says.  “This event is a great opportunity to escape the stressful busy daily life and gift my mind some uninterrupted creative space.”

“This gives me an opportunity to spend the time with my telescope set up under the much clearer Lathrop sky. But primarily, to share this art with a set of wonderfully creative and curious people,” Chattopadhyay says.

To know more about the retreat and how you can participate go to: