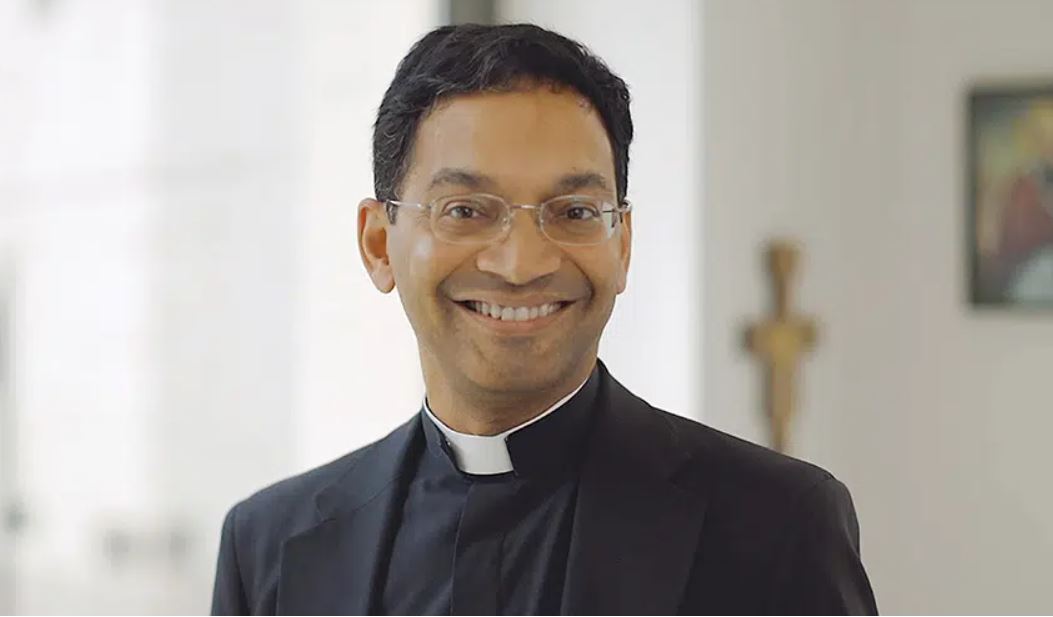 Son of Indian immigrants is also the first person of color to lead the Columbus, Ohio Diocese

Rev. Fernandes, now a priest in the Archdiocese of Cincinnati, would also be the first person of color in that role with Pope Francis naming him the 13th bishop of the Columbus Diocese, the Columbus Dispatch reported.

Fernandes, 49, a self-described “young and happy priest,” will be ordained a bishop and installed as leader of the Columbus Diocese on May 31, the newspaper said.

“This is the land of opportunity,” Fernandes said. “There is a great deal of pride (in being the first Indian-American bishop).”

Fernandes remembers celebrating the US bicentennial on July 4, 1976, holding signs with his brothers, according to the Dispatch. His father, who memorized the Constitution before taking his citizenship test, had fashioned together his own version of the Liberty Bell.

Fernandes would take the place of Robert Brennan who was reassigned by Pope Francis to lead the Diocese of Brooklyn in September.

Formally announcing his appointment at an event Saturday at the diocese’s Catholic Center on East Gay Street in downtown Columbus, Fernandes said humility guides him.

It’s the lesson his parents imparted on him, growing up poor in a neighborhood of Toledo. And it’s the moral imperative that followed his spiritual journey and career, he said.

Before becoming pastor at St. Ignatius of Loyola Church in Cincinnati, Fernandes attended the University of Toledo, where he got a bachelor’s degree in biology, before attending the University of Cincinnati College of Medicine, according to the Dispatch.

Fernandes, who comes from a family of doctors and teachers, realized in medical school he wanted to be a priest. He has a doctorate in moral theology from the Alphonsian Academy in Rome.

Before serving as pastor at St. Ignatius, Fernandes served from 2016 to 2019 on the staff of the Apostolic Nunciature, the offices of the Pope’s representative to the United States, in Washington.

While living in Washington, the white supremacist “Unite the Right” rally in Charlottesville, Virginia, that left one dead and 35 injured, was an eye-opening experience for Fernandes, the newspaper said.

“I see myself as a man, a human man, made in the image of God, and every person I see as a brother and sister,” Fernandes was quoted as saying. “We don’t have to use violence to achieve peace.”

Violence and hatred diminish a person’s soul, he said, and he practices affirmation not diminishment. He said he knows what it means to encounter prejudice firsthand.

“You don’t let other people dictate your life and beat you down,” Fernandes said, recalling times where he had been accused of stealing, had mud thrown at him or been passed over for jobs in the Catholic Church.

That adversity has shaped Fernandes’ own empathy, and he said he is thrilled to meet and work with the people throughout Greater Columbus and to get to know the region’s diverse population.

As a priest first ordained in the Archdiocese of Cincinnati on May 18, 2002, Fernandes was a parochial vicar at Holy Angels Church and taught religion at Lehman Catholic High School, a coeducational school in Sidney, Shelby County, from 2002 to 2004.

That experience in rural Ohio has guided Fernandes’ commitment to serve as a bishop for all 23 counties within the Diocese of Columbus, which includes a large majority of rural areas and farmland beyond Columbus.

“I’m not just here for the city folk,” he was quoted as saying. Nicknamed “Father Speedy” by his parishioners in Cincinnati for his fast-walking and talking, Fernandes is committed to efficiency when it comes to prioritizing goals for the Columbus Diocese.

He referenced Pope Francis’ desire to create a synodal church, or a church that walks together, listens and discerns.

“It’s not so much a program for social and political reform but for evangelizing — of bringing the joy of The Gospel to every level of culture and to every heart,” Fernandes said.

One of Fernandes’ first orders of business will be to study Real Presence, Real Future, the draft plans to restructure parishes within the diocese amid declines in attendance and a priest shortage throughout the Catholic Church.

Fernandes, according to the Dispatch, sees his appointment as an opportunity to create a missionary-oriented diocese, adding that the Catholic hierarchy can’t just be seen as bureaucrats lounging in air-conditioned offices.

“We need to be spiritual entrepreneurs,” he said. “We need to help everybody live their vocations and see Christianity not just as a set of rules, but a way of life.”