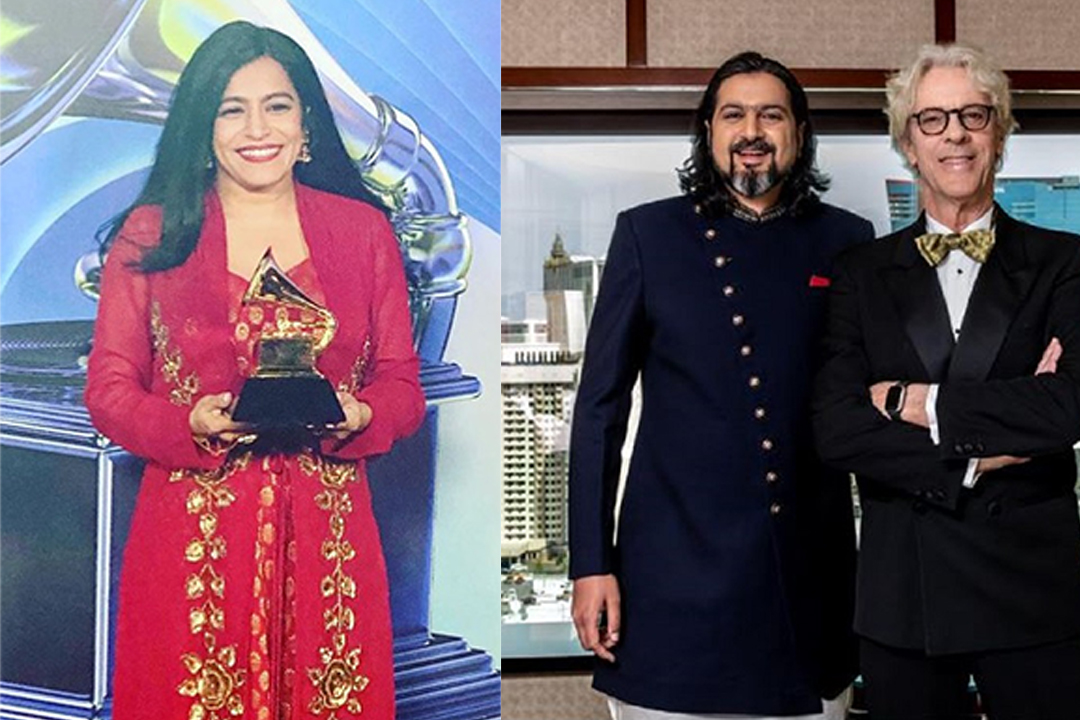 New York based musician Falguni Shah, better known as ‘Falu’, won her first Grammy for her album ‘A Colorful World’ for Best Children’s Music Album at the Sunday event.

Arooj Aftab, a Pakistani American, received the prestigious award for her song “Mohabbat” in the Best Global Music Performance category. 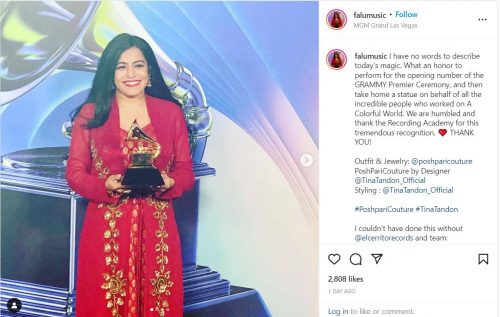 After her big win Falu wrote in an Instagram post, “I have no words to describe today’s magic. What an honor to perform for the opening number of the GRAMMY Premier Ceremony, and then take home a statue on behalf of all the incredible people who worked on A Colorful World. We are humbled and thank the Recording Academy for this tremendous recognition.”

Falu, a native of Mumbai, moved to the United States in 2000 and was hired as a guest lecturer at Tufts University. She began her musical training in Mumbai under the renowned sarangi and vocal guru Ustad Sultan Khan, and she has also collaborated with A R Rahman on the film ‘Slumdog Millionaire’ (2008).

In the US, she collaborated with famous musicians including Yo-Yo Ma, Wyclef Jean, Philip Glass, Ricky Martin, Blues Traveler.

In her acceptance speech after winning the Grammy she said, “Who would have thought that having my mother sing an old children’s lullaby from India would get a response from parents in America?” 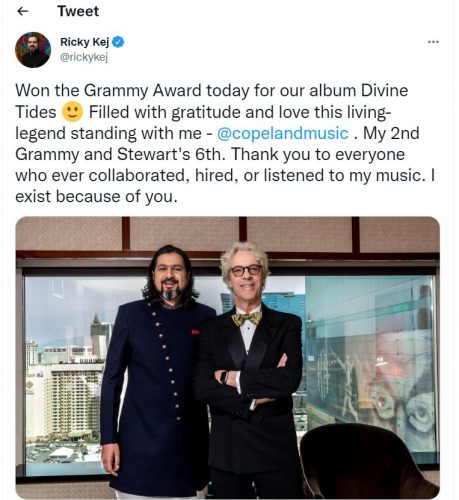 After winning the award Kej wrote on Twitter, “Won the Grammy Award today for our album Divine Tides. Filled with gratitude and love this living-legend standing with me – @copelandmusic. My 2nd Grammy and Stewart’s 6th. Thank you to everyone who ever collaborated, hired, or listened to my music. I exist because of you.”

Ricky Kej, the certified dentist-turned-composer, who has also created ad jingles and composed the music for several Kannada films. started his acceptance speech with a ‘Namaste’.

In 2015, he received his first Grammy for his album Winds of Samsara, and he was congratulated by none other than legendary Hollywood composer Hans Zimmer.

Kej was born in North Carolina in 1981 and has resided in Bengaluru since he was eight years old, according to his biography. He is half-Punjabi and half-Marwari. He attended Bishop Cottons School in Bengaluru before graduating with a degree in dentistry from college.

His initial interest was music, and he began his career as a keyboardist with the progressive rock band Angel Dust before becoming a full-time jingle writer and supporter of environmental issues.

Aftab, 36, the first Pakistani woman to get a Grammy Award, started her acceptance speech saying, “I think I’m gonna faint.”

Aftab sang the title track for Indian filmmaker Meghna Gulzar’s Hindi suspense movie ‘Talvar’ in 2015. She was also nominated for the Best New Artist award, however she lost to 19-years-old Olivia Rodrigo.

Aftab was born in Saudi Arabia to Pakistani parents and spent her childhood in Lahore before moving to Boston in 2005 to pursue a degree in music production and engineering at the renowned Berklee School of Music. She loves to sing in Urdu and combines minimalist jazz and neo-Sufi elements into her music.

According to her profile on the Berklee College of Music, “she is an “entirely self-taught female soloist and guitarist in a culture where opportunities for music study—especially for women—are severely limited.”

She uses her songs to publicly discuss social concerns in Pakistan and the rest of the globe. Her first and second albums, “Bird Under Water” (2015) and “Siren Islands” (2018), are early efforts at merging the worlds she grew up in, overlaying qawwali and Urdu lyrics with jazz music and ambient electronica, respectively.

Indian Prime Minister Narendra Modi has congratulated both Shah and Kej. “Congratulations on this remarkable feat and best wishes for your future endeavours,” Modi wrote in a tweet to Kej.

“Congratulations to Falguni Shah on winning the award for the Best Children’s Music Album at the Grammys. Wishing her the very best for her future endeavours. @FaluMusic,” he tweeted.

Shah responded to Modi’s tweet saying, “I am so honored Honorable Prime Minister Modiji. Thank you for your encouragement. This Award is for India. I’m the daughter of India and it is my dream to see India getting represented again and again on a global level!”