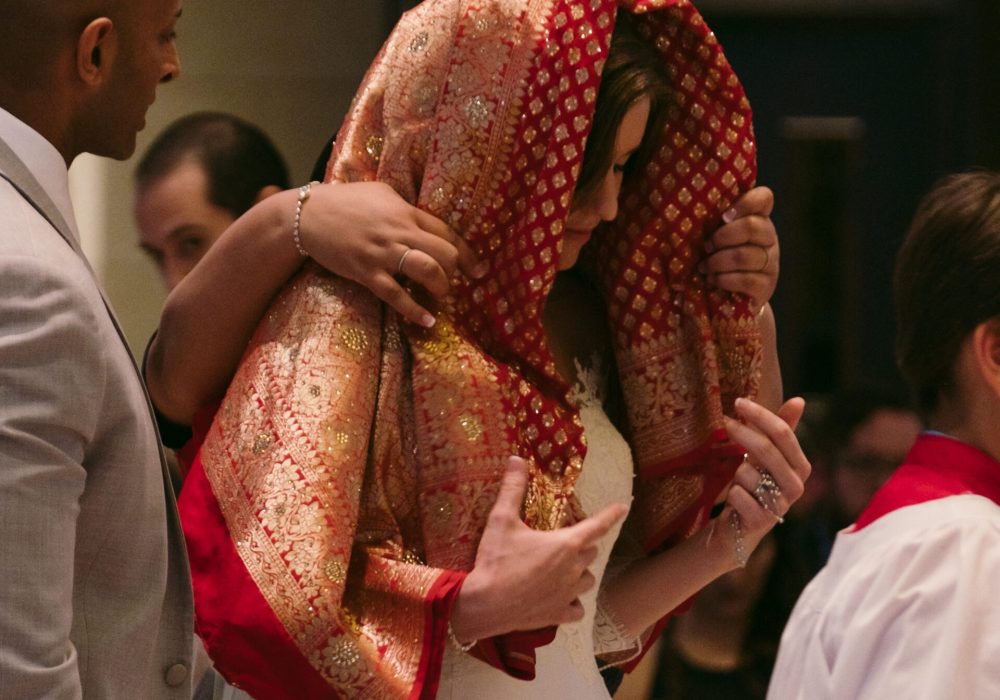 Growing up without filters of religion, nationality, race, or ethnicity, couples of South Asian descent marry for only love

Love is not in one’s control, this is that fire roused
It cannot be willed to ignite, nor can it be doused

So wrote Mirza Ghalib, India’s legendary Urdu poet, about one of the most powerful human emotions.

Amid a lot of hue and cry about interfaith marriages in India, particularly Muslim men marrying Hindu women, with some states enacting controversial anti-conversion laws, Desi Americans are proving him right.

While there are no restrictions from the state, desi American parents used to arranged marriages back home in India do go through a difficult time when their children find their own mates that too from a different religion, says Mike Ghouse, President Center for Pluralism.

A speaker, thinker, author, community consultant, pluralist, activist, newsmaker, and interfaith wedding officiant, Ghouse has dedicated his life to building a cohesive America and offers pluralistic solutions to the media and the policymakers on issues of the day.

“In last decade I have officiated nearly 200 weddings from people of different faiths and nationalities, several of them went smoothly,” he says. “But some of the parents were adamant that they will not accept a Hindu boy, Muslim girl or a Jewish, Christian or a Sikh spouse.”

“This happens even with single or divorced adults in their 40’s and 50’s. But in every case, we had a fruitful conversation, and finally, everything comes together for the happiness of their children.”

Two in five Desi Americans marry outside their faith, that is marrying with a Hindu, Muslim, Christian, Jew, Sikh, or the other that includes even hard-core atheists, notes Ghouse citing a Pew survey.

“What is good about our kids is they don’t have filters like religion, nationality, race, or ethnicity,” he says. “They go to school, work together and fall in love with each other.”

“The ultimate to their relationship is marriage,” Ghouse says. “They do not consider religion a barrier having found freedom that they did not get in their mother countries.”

The American young men and women, are independent, and unlike their parents, they are open-minded, and have no barriers between them and another person, he says.

The question of religion does not arise with them, but it becomes an issue with many parents of South Asian origin, be they Hindus, Muslims, Sikhs, Christians, or others, according to Ghouse.

“They worry about what their friends and relatives back home would say, but do not worry a bit about how their children would feel.”

A few parents, Ghouse says have voiced frustrations like, “I raised my girl with good religious education, she was observant of all the rituals and traditions we followed, and I cannot believe she chose to go with this guy from another faith.”

“The parents on both sides, make subtle to blatant efforts to ask the bride or the groom to convert to their faith,” says Ghouse.

“They pursue this relentlessly no matter how many times their kids say ‘No’ to them, then finally they beg to at least have their name change to suit their faith.”

“A few of them yield to such demands, provided there is no record of the temporary name anywhere, lest their family members and their friends back in India make a ruckus about it.”

Hindus and Muslims from South Asia go to extraordinary lengths to come to America, notes Ghouse. When they come here, they contribute to the well-being of America free from religious tensions.

But that freedom is still reserved when it comes to marriages between Hindus and Muslims. Invariably, the parents hassle their children about marrying a Muslim or Hindu, he laments.

However, it mainly happens with the new immigrants while the parents who came here several decades ago cherish and celebrate the marriage of their children whether they marry a Hindu, Muslim, Christian, Jew, Sikh, or any other, says Ghouse.

“When a couple is deeply committed to marrying, they go ahead and get married any way but sorely miss out on the ceremony,” writes Ghouse, who runs Interfaith Marriages, an organization that helps the parents and the couple with such unions.

“Over the years, I have seen too many couples miss out on the joy of that additional sense of completeness that comes with a religious tone in the ceremony,” he writes on the website http://interfaithmarriages.org/.

“Marriage is between two individuals, and their families and friends ought to be supporters and cheerleaders to celebrate and complete their joy,” Ghouse says.

“When we officiate a wedding, we work with the couples and the parents to ensure the wedding goes smoothly and everyone is on the same page, that is to cheer the couple.”

Ghouse shares his experience, “Invariably, I get to mediate between difficult parents and their kids once in a while. A Christian father disowned his son for choosing to marry a Hindu girl. He insisted she converts or else he would not attend the wedding.”

“After serious negotiations, I offered to invoke the name of Jesus in the ceremony, but without conversion, the father was not sure. He came to the wedding but stayed outside and peeked from the slightly opened door,” he said.

“When I concluded the ceremony by invoking the name of Jesus, he barged in, hugged me, and gave a hug to his son and even daughter-in-law. It was a joy to see the family unite in the marriage,” Ghouse recalled.

Religious men and scholars, he says need to understand that religion is personal and each religion serves the purpose it is designed to, to make one a good citizen.

“The idea of conversion assumes that the other’s religion is less than yours, which is a deficiency in understanding the purpose of religion.”

“However, people should always have the freedom to choose a religion that suits them. All are good religions,” says Ghouse. “Please remember individuals marry each other and not the religions.”

“Why does everyone in the world want to come to America?” he asks noting “America offers prosperity and the ability to be who you want to be. The religious freedom provided here should be a model to the world.”

Read: Interfaith marriage is common in U.S., particularly among the recently wed (June 2, 2015)

“The Americans are not afraid of people choosing any religion they want, as nation-building and prosperity come from working together and respecting otherness of the other,” Ghouse says.

“The world has followed the leadership of America in most aspects of life, be it science, medicine, innovation, information technology, artificial intelligence, and to a greater degree, her culture.”

Ghouse is of the view that if other nations follow America’s religious freedom model too, they can be as prosperous as America.

“Interfaith Marriages are the antidote to divisiveness,” says Ghouse. “They significantly contribute to the idea of one nation. When people are free from tensions and religious conflicts, they focus on building the nation, contributing their best to the workplace, and enjoying a meaningful life with their families. It is good for everyone.”