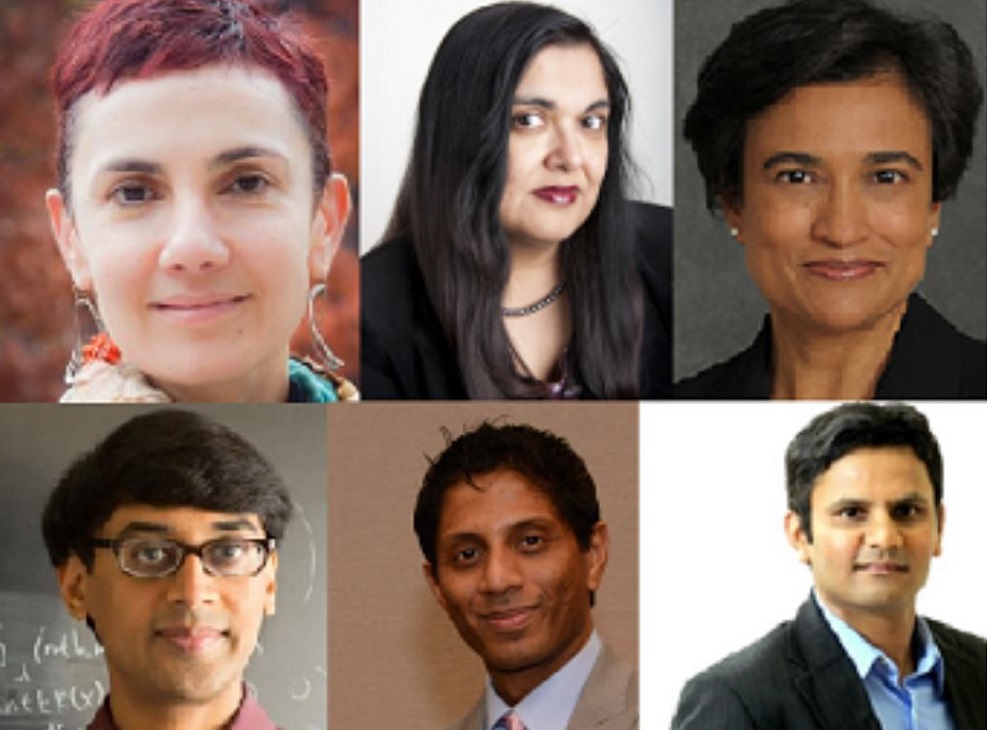 Six Indian Americans are among 180 scientists, writers, scholars, and artists awarded the 2022 Guggenheim Fellowships across 51 fields by the New York based John Simon Guggenheim Memorial Foundation.

Chosen from a rigorous application and peer review process out of almost 2500 applicants, these successful applicants were appointed on the basis of prior achievement and exceptional promise, according to a media release.

“This year marks the Foundation’s 97th annual Fellowship competition. Our long experience tells us what an impact these annual grants will have to change people’s lives.”

Created and initially funded in 1925 by Senator Simon and Olga Guggenheim in memory of their son John Simon Guggenheim, has granted nearly $400 million in Fellowships to over 18,000 individuals.

Jain received his BTech from the Institute of Chemical Technology in Mumbai and his PhD in Physical Chemistry from Georgia Tech. He was a postdoctoral fellow at Harvard and a Miller Fellow at UC Berkeley, following which he joined the University of Illinois faculty.

Jain has affiliations with the Materials Research Lab, the Department of Physics and the Beckman Institute. His research focuses on the understanding and control of light-matter interactions on the nanoscale and the use of confined light for artificial photosynthesis and imaging atomistic dynamics of complex solids and catalysts.

From 1995-2000 he was with AT&T Labs-Research, Florham Park and AT&T Bell Labs, Murray Hill–first as a Senior Member and later as a Principal Member of its Technical Staff.

He has published over 900 papers and has 18 granted US patents. His research and inventions have led to technology commercialization including through startups he co-founded: Behavioral Signals Technologies focused on the telecommunication services and AI based conversational assistance industry and Lyssn focused on mental health care delivery, treatment and quality assurance.

Bhargava, who joined the Princeton faculty in 2003 after receiving his PhD in mathematics from the University in 2001 has received numerous awards for his work,

These include 2014 Fields Meda, 2012 Infosys Prize; the 2011 Fermat Prize presented by the Toulouse Mathematics Institute in France; the 2005 SASTRA Ramanujan Prize from the Shanmugha Arts, Science, Technology and Research Academy in India; the AMS Blumenthal Award for the Advancement of Pure Mathematics in 2005; and the Packard Foundation Fellowship in Science and Engineering in 2004.

He was elected to the US National Academy of Sciences in 2013. He was named also one of Popular Science magazine’s “Brilliant 10” in 2002. As a graduate student, Bhargava studied under renowned mathematician Andrew Wiles, the James S. McDonnell Distinguished University Professor of Mathematics, Emeritus.

Rajaram is an Indian-born cognitive psychologist and expert on memory and amnesia. She received a BA in Psychology, Economics, and English Literature (1984) and a MA in Psychology (1986) from Mt. Carmel College of Bangalore University.

She moved to the United States to pursue a MS in Cognitive Psychology at Purdue University, and completed her degree in 1988. Rajaram was a post-doctoral research fellow at Temple University School of Medicine, where she conducted research on amnesia.

Rajaram joined the Faculty of Psychology at Stony Brook University in 1993 and was promoted to Full Professor in 2003. She received a FIRST Award from the National Institutes of Mental Health (NIMH).

In addition to NIMH, her research has been supported by the National Science Foundation, the Russell Sage Foundation, and Google.

Puri received the Guggenheim Fellowship for her current project on death and migration. She writes and teaches at the crossroads of sociology, sexuality studies, death studies, and postcolonial feminist theory. Her interests include sexuality, gender, race, nation, state, death, and religion.

In 2021, she was honored by the Jessie Bernard Award from the American Sociological Association. In 2019-2020, she was a Research Associate at the Women’s Studies Program in Religion at Harvard Divinity School. She previously received a Rockefeller Research Fellowship and a Fulbright Senior Research award.

Puri’s book, Sexual States: Governance and the Struggle against the Antisodomy Law in India’s Present, received the Distinguished Book Award from the Sociology of Sexualities Section of the American Sociological Association in 2018.

Sinha, a leading authority on the history of slavery and abolition and the Civil War and Reconstruction, was born in India. She received her PhD from Columbia University where her dissertation was nominated for the Bancroft prize.

She is the author of ‘The Counterrevolution of Slavery: Politics and Ideology in Antebellum South Carolina’, which was named one of the ten best books on slavery in Politico in 2015 and recently featured in The New York Times’ 1619 Project.

Her multiple award winning second monograph ‘The Slave’s Cause: A History of Abolition’ was long listed for the National Book Award for Non Fiction.

She is currently writing a book on the “greater reconstruction” of American democracy after the Civil War, which is under contract with Liveright (Norton).