By Payton Souders and Venky Raghavendra

Those of us constantly glued to our phones often take our access to digital technology for granted, forgetting that millions of people, mostly women, still do not have cell phones — much less smartphones. This digital divide is what Rosa Wang has spent much of her career working to bridge. In her new book Strong Connections: Stories of Resilience from the Far Reaches of the Mobile Phone Revolution, Wang uses powerful storytelling from her experiences in rural India and Sub-Saharan Africa to take us to the last frontier of the mobile phone revolution.

Wang believes in harnessing the power of technology for the good of humanity. As Global Director for Opportunity International, she has helped create a worldwide network for microfinance, opening more than six million digital bank accounts for some of the most marginalized individuals on the planet. Earlier, while working at Ashoka, she advised up-and-coming social entrepreneurs working in technology and social investment.

Wang says that when historians write about the mobile phone revolution one day, those who are marginalized and their resilience should not be left out of the written record.

Payton Souders and Venky Raghavendra had a chance to talk to the author about her recent book and global journey in digital technology.

Souders and Raghavendra: Technology has ruled our lives yet a huge digital divide remains. What led you to getting involved in this issue and why is digital equity so hard to achieve?

In my book, I explore some of the cultural reasons behind the digital divide, especially the gender disparity. If women owned phones at the same rate as men, there would be 200 million more phone owners globally. Unlike issues of connectivity and infrastructure where business investment has made tremendous advantages, the cultural and gender issues are stubbornly persistent.

In your book you describe meeting 14 women in rural Bhopal in Central India, only two of which had a cell phone for their own personal use. Could you tell us a little about what you experienced, and what this story tells us about gender parity in digital technology? 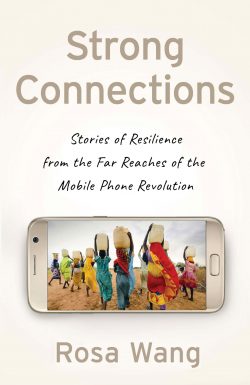 This scene still stays with me. The discussion illuminated that phone ownership, even in very poor areas, is quite high, but that the women did not view the phone as a tool of their own and many were intimidated to even use it to make a simple call. The interaction, plus additional work and feedback at the time shifted our work to focus on elements that disproportionately affect women, not just in Bhopal, but across India, and indeed across the world. The script of training women shifted away from mechanics, toward one of reassurance, and we work to bolster the confidence of the women. I believe these modified techniques can have far reaching effects in helping a woman on her journey from being digitally and financially excluded to included.  These efforts can also help a woman have more influence within her family and community .

Much of your book touches on your own story while also weaving in the stories of those you have met around the world while working in financial technology. How did growing up in rural America affect your current perspective on digital financial services?

I lived in Meridian, Mississippi from the time I was 5 years old until I left for university back when there were very few Asian Americans living in the American South. I find that a degree of pragmatism that I observed in my youth has influenced the way I think about things and also the themes of persistence and resilience that I observed in a lot of people in my early years helped me to persevere in challenging environments.

One thing that I learned at an early age is the need to adapt to change. Given the fast pace and dynamic environment of the digital arena, adaptability and continuous learning are essential.

You often talk about how you prefer to use storytelling rather than a deluge of statistics or technical data. This is definitely true of Strong Connection. Through your writing the reader gets the chance to meet remarkable people from around the world. Why do you use storytelling and how did you build this skill?

I started this about five years before I began working on the book. In presentations and  workshops, I shifted my talks away from more technical matters to telling a story, especially the story of impact on a person’s life when they have access and usage of technology. I found that this approach had much more traction and was memorable to the audience.

I also learned some techniques of storytelling from many of the areas where I’ve worked, especially East Africa. In many of these traditional oral cultures, beautiful stories are interwoven with lessons to remember.

Before you began working in digital financial services, you worked in investment banking. Why did you decide to pivot and what advice would you give to other professionals interested in transitioning to a career in social impact?

For those interested in making similar moves, I would encourage everyone to look for ways to use your current skill set, which could be software coding, financial skills, writing talents, and to find a purposeful way to support the areas that mean the most to them.

Now that you have completed the momentous undertaking that is writing a book, what is next for you in your journey?

I did not expect that I would enjoy the process of learning how to write, writing, and engaging with communities of writers as much as I have. This has been one of the best side effects of working on the book. I’m currently working on ways to spread the learnings of the book through other media such as podcast interviews. I’m also exploring ways to tie the themes of the book into the wider set of issues of global importance such as climate change.

Becoming more aware of the issues and their interwoven complexity is a great first step. I think also having an intentional approach, for example focusing directly on the gender gap, can be more productive. I would also hope that people come away from reading the book with a realization that innovation and technological advancement are part of the story of progress in places like rural India.

(Venkatesh Raghavendra is a Contributing Editor of American Bazaar and a global social entrepreneur.  Payton Souders is young professional embarking on her own social entrepreneurship journey, finding inspiration from leaders like Ms. Wang.)