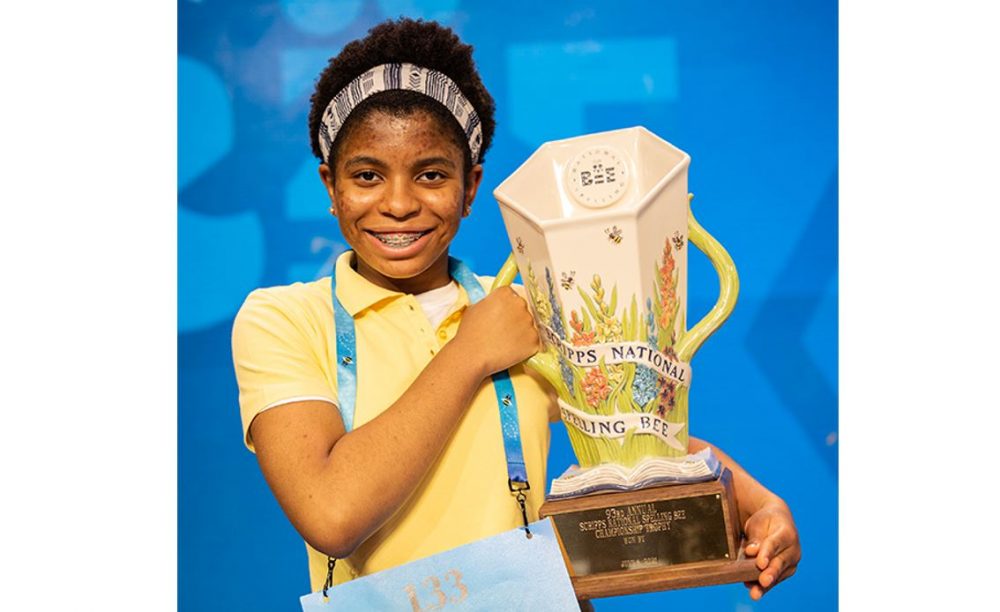 After winning the Bee for 12 straight years, Indian-American kids made way for the first-ever African-American winner in 2021

Returning to National Harbor, Maryland, at the end of May, it’s carrying forward two competition elements from 2021: word meaning rounds and the spell-off option, according to a press release.

“We know from speller feedback that both the word meaning component and the spell-off option were exciting additions to the competition in 2021, so we’re bringing them back and letting these spellers flex skills, such as understanding word meanings and rapid-fire spelling, that they practice all year long,” said Dr. J. Michael Durnil, executive director of the Bee.

Introduced in 2021 to challenge spellers in a new way and enhance the competition’s focus on literacy, word meaning is an oral vocabulary component that will again appear in the second round of each level of the competition – the preliminaries, quarterfinals, semifinals and finals.

The speller will be required to orally select the correct multiple choice answer to a word meaning question read by the pronouncer. The speller will have 30 seconds to view the question and the three answer choices.

The speller must choose the best answer within the time limit to move on to the next round of competition. All other rounds of the competition will consist of traditional oral spelling.

The Bee also will again have the option to declare a spell-off this year. The spell-off was introduced in 2021 but was not activated because the competition, in its closing minutes, had entered a final round with eventual champion Zaila Avant-garde.

This year, the judges will have sole discretion to initiate a spell-off to end the finals – the spell-off will not be tied to a specific minute mark as in 2021.

Each speller remaining in the competition would have 90 seconds to spell words from a spell-off word list prepared in advance by the Bee. The same words would be delivered in the same order to each speller in the spell-off, and spellers not competing would be sequestered.

The speller who would spell the highest number of words correctly during their 90-second turn would be declared champion.

If two or more spellers earned the same top score during the spell-off, the officials would attempt to break the tie by determining the speller with the highest percentage of words spelled correctly out of words attempted.

The 2022 Scripps National Spelling Bee rules are available at spellingbee.com.

The Bee will air on the ION and Bounce television networks June 1-2 and will be hosted by accomplished actor, director, educator and lifelong children’s literacy advocate LeVar Burton.

“For audiences watching along on ION and Bounce this year, we promise a broadcast unlike any other as we follow the journeys of the 2022 national qualifiers and regional competitors – on and off stage – through original TV programming,” said Durnil.

The Bee will announce the full broadcast and streaming schedule for the 2022 competition and related TV programming later this spring.