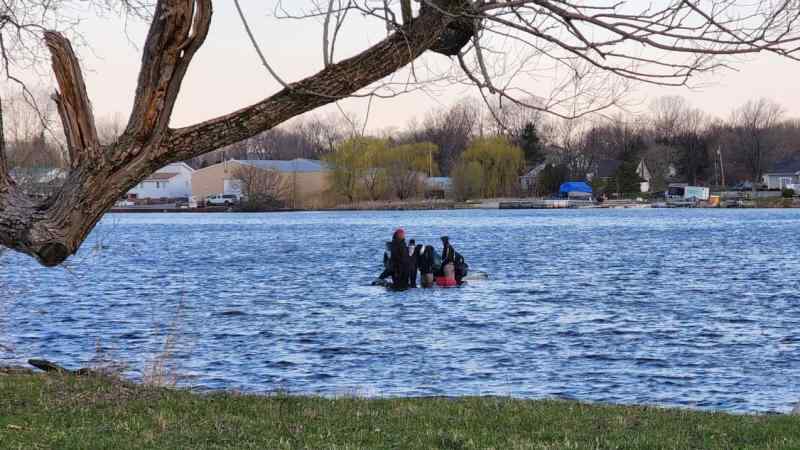 US border patrol agents have arrested six Indian youth along with an American who was trying to smuggle them into the US from Canada after being rescued from a sinking boat in Akwesasne, New York.

The six Indians between the ages of 19 to 21 years, were charged with improper entry by alien in violation of US law on May 5, according to the US Customs and Border Protection.

Their America smuggler has been charged with alien smuggling, which carries a penalty of up to 10 years in prison for each violation and a fine.

US customs said Akwesasne Mohawk Police Service received a report on April 28 about a boat containing several people traveling from Canada near Cornwall, Ontario, toward the United States.

The Saint Regis Mohawk Tribal Police Department responded and observed the vessel taking on water and sinking in the Saint Regis River in Akwesasne.

Answering the call for assistance, Border Patrol agents and the local fire department HAVFD arrived on the scene to find the reported vessel almost entirely under water.

One of the seven exited the sinking boat and made his way to the shore. The HAVFD deployed a boat and was able to rescue the other six from the freezing waters.

It was later determined there were no life jackets or other safety equipment on board the sinking boat, the customs said.

As the water temperature was just above freezing, all seven were evaluated and treated for hypothermia by medical professionals.

“Outstanding cooperation between law enforcement and rescue services prevented what could have been a horrific tragedy,” said Chief of Police Matthew Rourke of the Saint Regis Mohawk Tribal Police Department.

“I emphasize that human smuggling is illegal and poses a significant danger to the Akwesasne community,” he said.

Read: Passengers in boat that sank during attempted crossing from Ontario to U.S. couldn’t swim, say U.S. border authorities (May 9, 2022)

“Human smuggling is not only a crime but extremely dangerous. Smugglers do not care about safety or human life; they only care about profits,” said Massena Station’s Patrol Agent in Charge Wade Laughman.

In January this year a family of four Indians died while trying to cross over into the US on foot from Canada in a blizzard.

The bodies of the four from Gujarat — Jagdish Baldevbhai Patel, 39, Vaishaliben Patel, 37, Vihangi Patel, 11 and Dharmik Patel, 3 – were found near Emerson, Manitoba, just 40 feet from the Canada/US border.