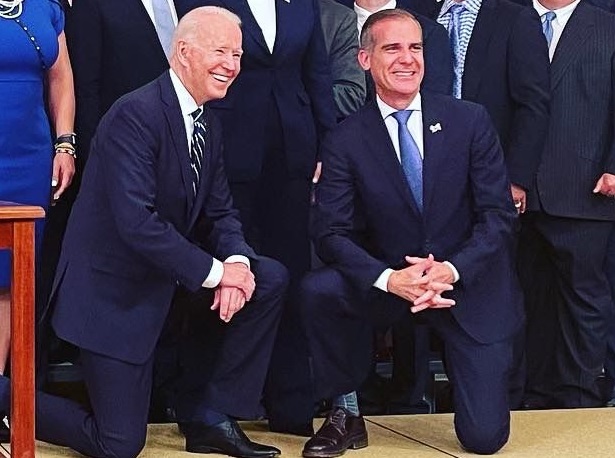 Los Angeles Mayor Eric Garcetti’s nomination to be ambassador to India may be in trouble with a new report from Republican Senator Chuck Grassley’s office saying he likely knew about a top aide’s alleged sexual misconduct.

Accusations against former Garcetti lieutenant Rick Jacobs have loomed as an obstacle to Garcetti’s ambassadorship from the moment President Joe Biden nominated him, according to Politico.

Garcetti has consistently denied having knowledge of Jacobs’ alleged behavior and the White House swiftly dismissed Grassley’s conclusion on Tuesday.

However, the report could fuel more hesitancy among Senate Democrats who were already wavering over a confirmation vote in an evenly split Senate, Politico said.

The report from the Iowa Republican’s office found that “it is more probable than not that Mr. Jacobs sexually harassed multiple individuals, and made racist comments towards others,” according to Politico.

More significantly for Garcetti, the report determined that the mayor was likely aware of the situation — contradicting a law firm’s report, commissioned by the city of Los Angeles, that cleared Garcetti.

“Several individuals told investigators that Mayor Garcetti was aware of this behavior, and based on the reported frequency and conspicuous nature of the conduct, it is more likely than not that Mayor Garcetti either had personal knowledge of the sexual harassment or should have been aware of it,” the report said.

Garcetti was nominated as envoy to India after serving as a prominent Biden surrogate during the 2020 campaign. He initially appeared to be on a glide path to confirmation despite swirling questions about Jacobs, enjoying a largely laudatory initial Senate Foreign Relations Committee hearing, Politico noted.

But Grassley placed a hold on the nomination after hearing from whistleblowers. Former Garcetti communications director Naomi Seligman has urged Senate officials to further vet claims that Garcetti was aware of Jacobs’ alleged misconduct.

Both Garcetti and the White House pushed back on the report, with Garcetti representative Dae Levine saying in a statement that it was “based solely on false, repackaged allegations that have been proven false by multiple unbiased investigations and reviews.”

A Biden representative cited by Politico noted the mayor had said under oath he never witnessed misconduct, rejecting Grassley’s report as a “partisan hit job” whose underlying claims had been largely “debunked” and reiterating Biden’s confidence in Garcetti.

“The President has confidence in Mayor Garcetti and believes he will be an excellent representative in India at a critical moment and calls for the Senate to swiftly confirm him,” spokesperson Chris Meagher stated.