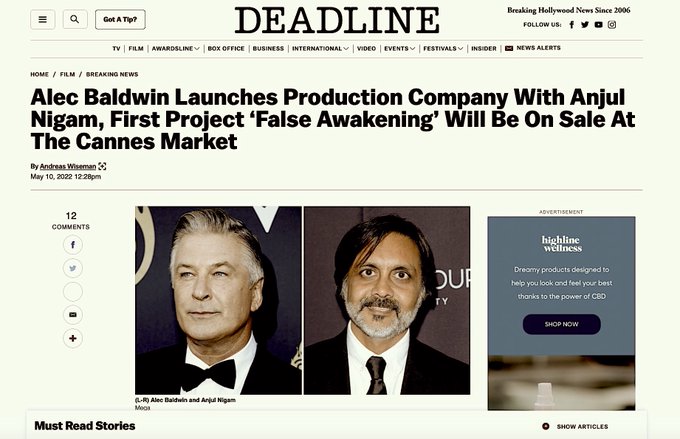 Its first project will be on sale at the upcoming Cannes market, Hollywood and entertainment news site Deadline reported.

Baldwin and Nigam were among producers of Rust, the film whose production was halted last year after Baldwin accidentally shot DP Halyna Hutchins, who died from her wound.

Baldwin is due to star in and exec-produce Persona’s first project, psychological thriller False Awakening, about a man whose waking nightmares start to fuse with his everyday life.

Baldwin will play a psychologist who compels the man to tap his higher powers in confronting his past and preventing his life from spiraling into a violent psychosis, Deadline said. Nigam will produce and star in a supporting role. Writer-director is Benjamin Tomson (Forgotten Bayou).

False Awakening is among the first new projects Baldwin has been announced for since the Rust tragedy, though he has acted in multiple films since, Deadline noted.

Baldwin and Nigam also collaborated on Rust filmmaker Joel Souza’s Crown Vic on which both served as producers, and they star in the upcoming features Supercell and 97 Minutes, with Nigam serving as an executive producer on both pictures.

About his partnership with Nigam, Baldwin was quoted as saying, “I have enjoyed producing with Anjul Nigam for a few years now. He brings to the table the rare combination of skills that move the process forward and that result in something I am proud to be a part of.”

Nigam commented, “Alec and I complement each other perfectly and I couldn’t be more honored to be in partnership with him. It’s thrilling to have False Awakening, a film that’s a tribute to classics like The Exorcist and Rosemary’s Baby, be our first production.”

Amp’s James Norrie added about the project, “A false awakening is a real condition. And it is the stuff of nightmares. Ben has crafted a terrifyingly believable script about a little-known condition that has all the hallmarks of classic in the making. We are thrilled to be a part of the team.”

Norrie, Stephen Foreht and Steve Straka will serve as executive producers, and Esther Egg and Matt Taylor are co-producers.

Baldwin is represented by ICM. Nigam is repped by Ellis Talent Agency and DiSante Frank & Co, according to Deadline.