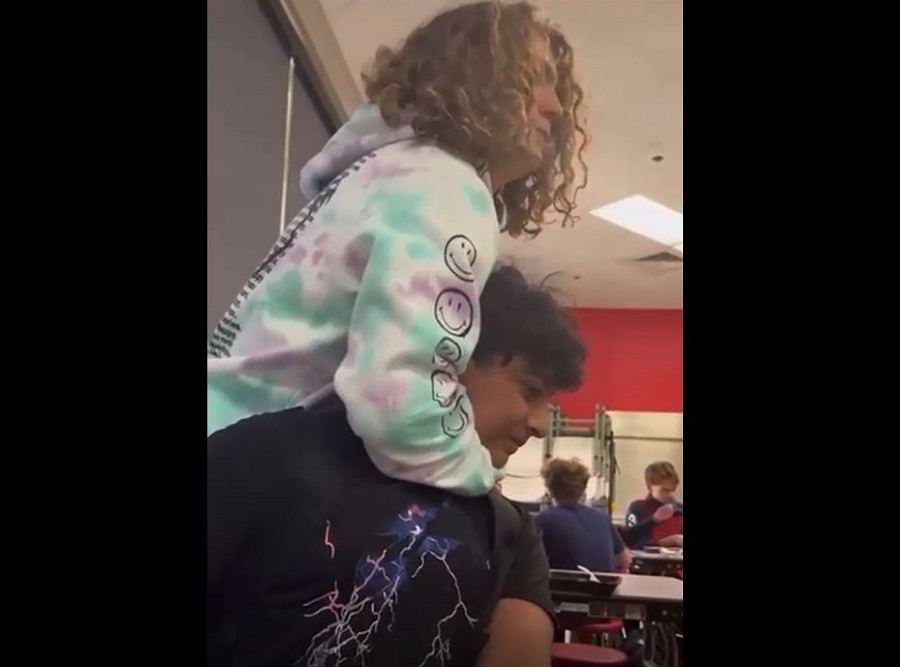 An Indian American student, Shaan Pritmani was physically attacked during lunch and choked by another student, at his middle school in Texas on May 11.

A video of the assault in the cafeteria at Coppell Middle School North shot by Shaan’s classmates has gone viral and sparked anger on social media.

The video shows a white student approaching the Indian American boy who is sitting on a bench and demanding that he stand up. When he refuses to give up his seat, the white student gets angry and starts choking him. He presses the boy’s neck from behind with his elbow before choking him and pushing him against his seat.

Shaan’s mother Sonika Kukreja has started a petition on Change.org a worldwide petition website, based in California, seeking protection of victims of assault at schools and action against the bully.

The petition had gathered over 213,474 signatures by May 17 morning. At 300,000 signatures, it would become one of the top signed petitions on Change.org!

The school called Shaan’s parents and informed them that their son had been in an altercation with another student, according to the petition. The school stated that the victim (Shaan) was at fault and received a 3-day in school suspension (ISS) as punishment, while the aggressor only received a 1-day ISS, it says.

Shaan’s friends shared the video of the assault with parents and reached out to inform them that Shaan wasn’t at fault. Shaan’s parents reached out to school authorities, shared the evidence and requested a reassessment. The school informed the parents that they have seen the video and that there will be no change in the course of action.

The Coppell Independent School District (ISD) School Resource Officer (SRO) officer refused to file a citation because school administration asked it not be written, as there have been too many bullying complaints lately.

The Coppell Police Department also dropped the ball. The parents tried in vain for over two hours to get a complaint filed, but were refused.

Shaan’s aggressor in the video is on the wrestling team and can be seen carrying out a very dangerous carotid restraint on Shaan’s neck, the petition says.

This technique restricts blood flow to a person’s brain by compressing the sides of the neck where the carotid arteries are located. Shaan appears to briefly lose consciousness at the end of the neck choke maneuver.

“Due to lack of support from the Coppell ISD and Coppell PD to correctly handle this assault, we are demanding that the aggressor be removed from my son’s school immediately,” the petition said.

“Shaan should never have to take a class, interact, or pass the hallways with this aggressor ever again,” it said. “Shaan should be able to continue his school experience, friendships and extra-curricular activities with zero worry of ever having to cross paths with this student again. He does not feel safe.”

“Our goal is to bring awareness to the bullying and assault problem in schools everywhere. All children deserve to be safe at school. Serious repercussions need to be in place for all violence against our children. This type of aggression needs to stop!” the petition demanded.

“Bullying, both verbal and physical, as well as physical acts of aggression are never acceptable and do not align with who we are at CISD and our core values.”

The statement which was also posted online, has been widely criticized with many users pointing out that the video clearly showed assault.

According to local media reports, the parents of the bullied student have also sought legal representation as they await the internal investigation of the school to end.