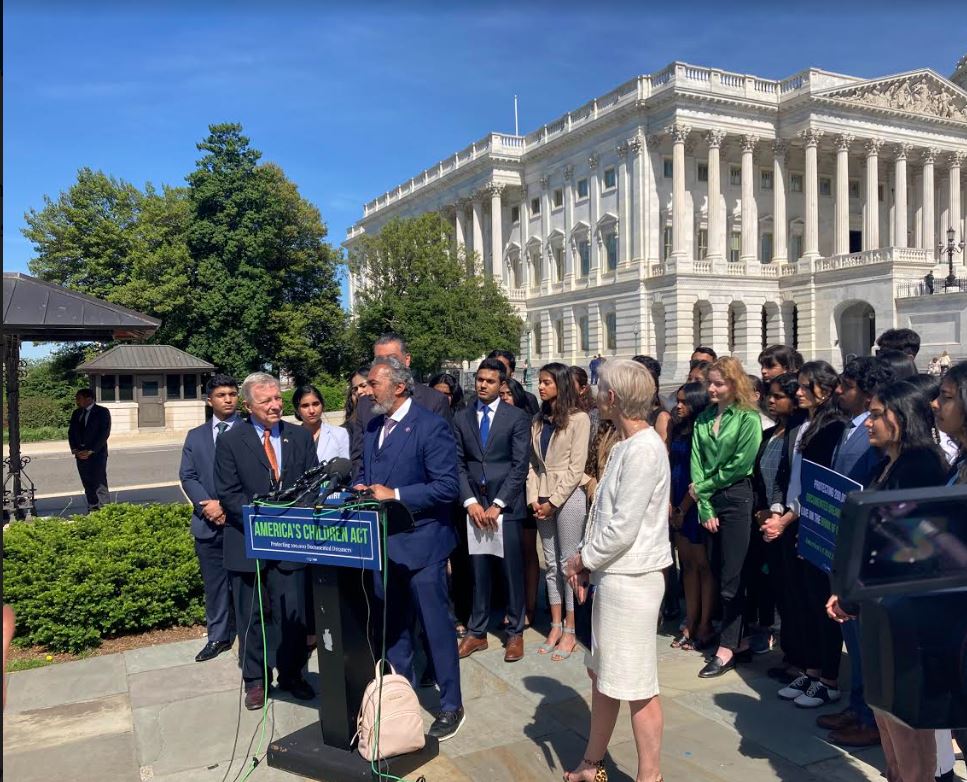 One of the largest group of documented dreamers, young immigrants who were brought to the US by their parents when they were kids, joined lawmakers on Capitol Hill Wednesday in support of a legislation to give them protection.

They shared their stories as two more Democratic US Representatives Deborah Ross and Indian American Ami Bera joined senators Alex Padilla and Dick Durbin to call for the passage of America’s Children Act.

The bipartisan legislation would protect documented dreamers who are dependents of long-term nonimmigrant visa holders, from aging out of the system when they turn 21.

“Documented Dreamers grow up in our communities, attend our schools, and learn alongside our children. They love our country and want to give back to the people and places that raised them,” said Ross.

“These inspiring young people represent the very best of America. It’s been a privilege to work with them—and with my colleagues in the House and the Senate—to design bipartisan, bicameral legislation that will have a positive impact on so many promising lives. Let’s give Documented Dreamers the chance to stay in the country they love and call home.”

“For these young people who came lawfully, turning 21 means facing an impossible choice – either to leave your family and self-deport to a country that you may barely remember or to stay in the United States living undocumented and in the shadows. We will not give up because Documented Dreamers and millions of other immigrants deserve better.”

“These are young people educated in the United States, grew up in this country, and are looking forward to a future in this country,” said Senate Judiciary Committee Chair Durbin.

“But our immigration system is built on a premise that they are undocumented and undeserving of citizenship status. We want to change it with this bill,” he said. “We want to say to them and so many more like them: we want you to be a part of America’s future. If your choice is to be part of the future of America, we welcome you. We need you.”

“We’re a nation of immigrants, one generation after another bringing with us our heritage, our culture, our religions, our traditions – all woven together. That’s America’s strength, and that’s what this is about,” said Bera.

“We’ve got to fix this flaw in our immigration system. We ought to welcome these kids to be part of that next generation to continue to move our country forward.”

“Improve the Dream was started with the vision that all children who grow up in the United States should have a clear path to citizenship and passing America’s Children Act will end aging out and bring our vision to life,” said Dip Patel, founder of Improve the Dream.

“We thank Congresswoman Deborah Ross for championing this cause for us, and Senator Padilla for leading it in the Senate. You have all given us a beacon of hope for achieving the American dream, and your dedicated support is the reason we have hope of one day being recognized as something we have long felt—being Americans.”

Over 200,000 children and young adults are living in the United States as dependents of long-term nonimmigrant visa holders (including H-1B, L-1, E-1, and E-2 workers).

Read: Democratic US lawmakers seek pathway to citizenship to 250,000 documented ‘dreamers’ majority of whom are Indian Americans (May 19, 2022)

These individuals grow up in the United States, attend American schools, and graduate from American universities. Because they have maintained legal status, Documented Dreamers are not eligible for protection under DACA or the work authorization that comes with it.

Last July, Representatives Ross, Mariannette Miller-Meeks, Raja Krishnamoorthi, and Young Kim introduced the bipartisan act in the House and companion legislation was introduced in the Senate by Senators Padilla and Rand Paul.

If passed, the bill would permanently end aging out and provide a pathway to permanent residency for these young people.