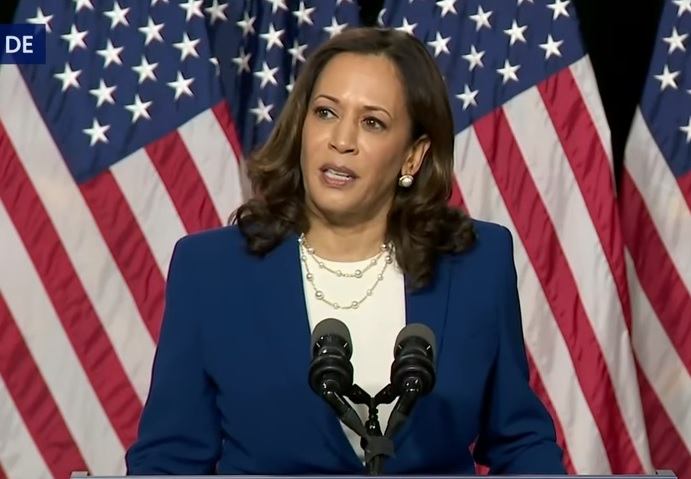 Noting that America has already experienced 200 mass shootings this year, Vice President Kamala Harris has called upon all people to stand up and say “we will not stand for this. Enough is enough.”

The first African American and Asian American also asked the Congress to act suggesting multiple ways including background checks and a ban on assault weapons, which is “a weapon of war with no place — no place in a civil society.”

“I cannot even begin to express our collective pain as a nation for what you are feeling in such an extreme way— to not only lose someone that you love, but through an act of extreme violence and hate,” she said Saturday.

“And I do believe that our nation right now is experiencing an epidemic of hate,” Harris said at the memorial service at Mt. Olive Baptist Church for Mrs Ruth Whitfield one the victims of the May14 shootings at a supermarket in Buffalo, New York.

But “we will not allow small people to create fear in our communities; that we will not be afraid to stand up for what is right, to speak truth even when it may be difficult to hear and speak,” she declared.

“There’s a through-line — what happened here in Buffalo, in Texas, in Atlanta, in Orlando; what happened at the synagogues,” Harris said. “And so this is a moment that requires all good people, all God-loving people to stand up and say we will not stand for this. Enough is enough.”

“We will come together based on what we all know we have in common, and we will not let those people who are motivated by hate separate us or make us feel fear,” she said.

Later talking to reporters before departure of Air Force Two, Harris said, “we need to look at the fact that this year alone, I’m told that we’ve had over 200 mass shootings — over 200 — and we’re barely halfway through the year.”

“And when we’re looking at an epidemic of hate where people are being targeted just because of who they are, I think we all have to stand back and say, ‘Wait, enough. Enough is enough,” she said.

“We have to — everybody has got to stand up and agree that this should not be happening in our country and that we should have the courage to do something about it,” she said.

“On the issue of gun violence, I will say as I said countless times: We are not sitting around waiting to figure out what the solution looks like. You know, we’re not looking for a vaccine. We know what works on this,” Harris said.

Calling for background checks,” Harris asked, “Why should anyone be able to buy a weapon that can kill other human beings without at least knowing, hey, has that person committed a violent crime before? Are they a threat against themselves or others?”

“When we’ve had over 200 mass shootings in our country already and we are barely in June, let’s all agree we got to do something, and it’s within our power to do it,” Harris said. “Congress needs to act. And what I know is that we also have to come together as one nation, undivided, standing with each other.”

On May 14, a gunman wearing military gear and livestreaming with a helmet camera opened fire with a rifle in a supermarket in Buffalo, New York, killing 10 people and wounding three others.