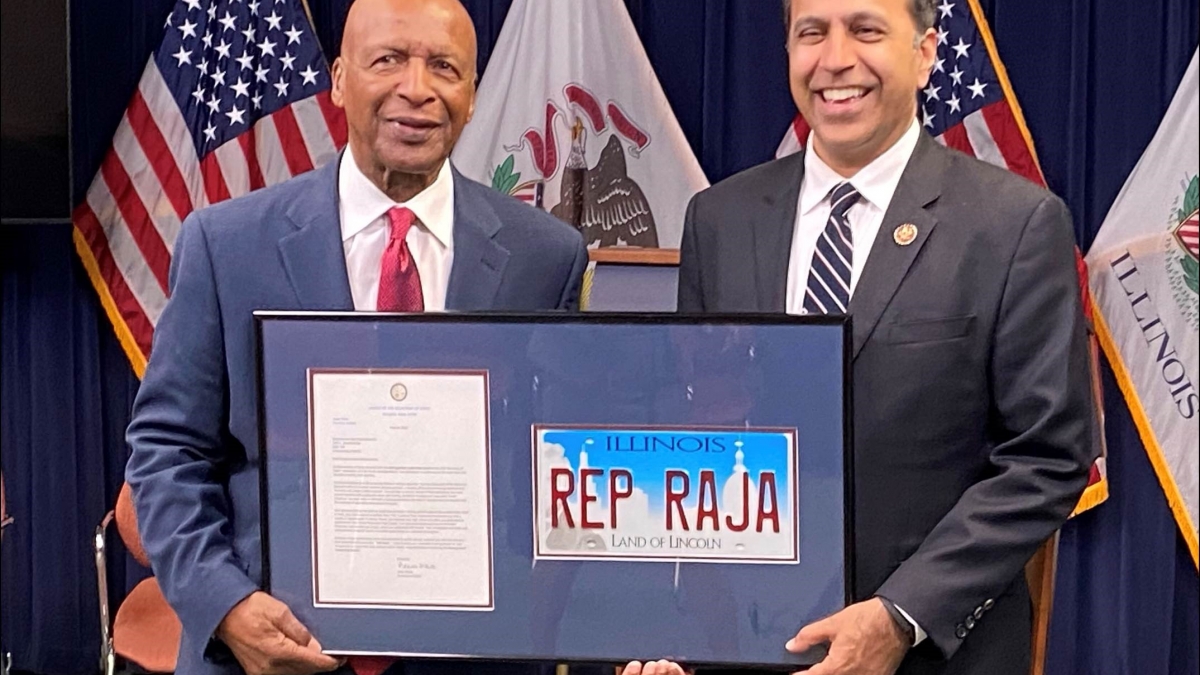 Indian American Congressman Raja Krishnamoorthi, who represents the 8th District of Illinois, which includes Chicago’s west and northwest suburbs, has received the Distinguished Leadership Award from the state.

Illinois Secretary of State Jesse White presented the award to Krishnamoorthi in Schaumburg, Illinois on Thursday with a citation stating, “Your dedication to public service for more than two decades is worthy of recognition.”

Besides the award, White also presented him with a one-of-a-kind personalized license plate bearing his first name “RAJA” in honor of “your outstanding career and dedication to public service,” according to a press release.

“It was a true honor to receive an award for leadership from a man of Secretary White’s character and record,” said Krishnamoorthi after the ceremony. “I’m grateful for this award and for the inspiration Secretary White has provided and continues to provide for everyone committed to public service.”

“Your personal journey has been an inspiration to those in Illinois and throughout the United States,” stated the citation noting, “Born in India, your family moved to Buffalo, New York, to pursue their dreams and to provide you with a wealth of opportunities.”

“In Peoria, Illinois, you received your high school education and graduated as valedictorian from Peoria Richwoods High School. Your educational path took you to Princeton University and Harvard Law School, where you graduated with honors,” the citation said. noting, “Your remarkable work ethic and achievements prepared you to accomplish great things as a member of Congress.”

“You have dedicated your life to serving Illinois in various capacities,” the citation recalled. “You have been part of the Attorney General’s office as a special assistant attorney general, a member of the Illinois Housing Development Authority and a deputy state treasurer.”

“As a member of the US House of Representatives, you have passed legislation influencing education, job training, workforce development and public health initiatives.”

“You have been an advocate of good government, the need to increase national security and the necessity of expanding international relations.”

“In honor of your outstanding career and dedication to public service, I present you with the one-of-a-kind personalized license plate: ‘RAJA,’” said White.

“I hope it serves as a reminder of our gratitude for your exceptional service to this state and our nation,” he said. “Again, congratulations on receiving the Distinguished Leadership Award.”

“It strikes me that getting an award for leadership from Jesse White is like having Michael Jordan tell you he likes your jump shot,” said Krishnamoorthi in response.

“Regardless of the uniform he’s worn or office he’s held, Secretary White has been a trailblazer, never caring about who gets the credit, only what difference is made for the better.”

“We’ve seen that during his tenure as Illinoi’s most successful and longest-serving Secretary of State, in the General Assembly, and as a community leader in countless other endeavors, notably as a mentor and coach,” Krishnamoorthi said.

“It’s fitting that an organization that bears his name embodies so much of his character as the Jesse White Tumbling Team has helped change more than 18,000 young people’s lives for the better since he founded it in 1959,” he added.