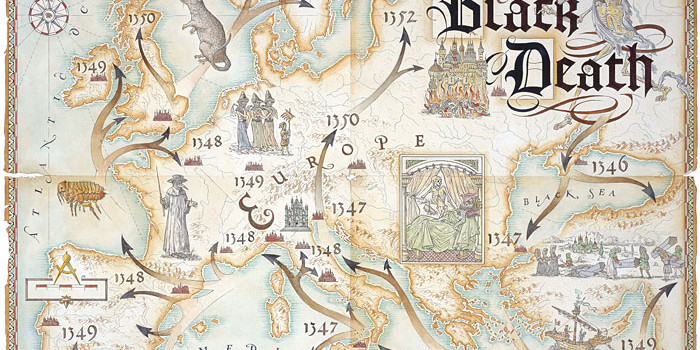 The most infamous pandemic in history devastated Europe, West Asia and North Africa from 1347 to 1352

Amid several studies on the origin of Black Death that remained vague, researchers from the University of Tübingen have pieced together complete ancient plague genomes from the sites in Kyrgyzstan and concluded the date to be 1338.

The Black Death devastated Europe, West Asia and North Africa from 1347 to 1352, and is the most infamous pandemic in history, wiping away up to 50% of Europe’s population, transforming religious and political structures, giving scope for the Renaissance.

Although ancient DNA research has identified ‘Yersinia pestis’ as the Black Death’s causative agent that evolved across millennia, its origins have long been elusive.

Now, a multidisciplinary team of scientists from the Max Planck Institute for Evolutionary Anthropology in Leipzig, the University of Tübingen, in Germany, and the University of Stirling, in the United Kingdom, have obtained and studied ancient ‘Yersinia pestis’ genomes and traced the pandemic’s origins to Central Asia, to be precise Lake Issyk Kul, one of the reservoirs around the Tian Shan mountains. The findings show that an epidemic wiped out a local trading community in the years 1338 and 1339.

“We found that modern strains most closely related to the ancient strain are today found in plague reservoirs around the Tian Shan mountains, so very close to where the ancient strain was found. This points to an origin of Black Death’s ancestor in Central Asia,” explains Johannes Krause, senior author of the study and director at the Max Planck Institute for Evolutionary Anthropology.

Some excavations 140 years ago unearthed some tombstones indicating that individuals died in the mid-14th century of an unknown epidemic or “pestilence.” However, it remained controversial whether the tombstones, inscribed in Syriac language, have any relevance to the Black Death of Europe.

Based on DNA samples with the plague bacterium, Yersinia pestis, that was identified in individuals with the year 1338 inscribed on their tombstones, the team concluded the exact date of origin of plague.

“We could finally show that the epidemic mentioned on the tombstones was indeed caused by plague”, says Phil Slavin, one of the senior authors of the study and historian at the University of Sterling, UK.

Studies have shown already that in 1347, plague first entered the Mediterranean via trade ships from the Golden Horde in the Black Sea and then disseminated across Europe, the Middle East and northern Africa claiming up to 60 percent of the population in a massive outbreak, called the Black Death. It remained a pandemic for almost 500 years, and lasted until the early 19th century.

Unprecedented precision
Earlier, McMaster University researchers analyzed thousands of documents covering a 300-year span of plague outbreaks in London and estimated that the disease spread four times faster in the 17th century than it had in the 14th century.

They found a striking acceleration in plague transmission between the Black Death of 1348 and the Great Plague of 1665 – the number of victims doubled approximately every 43 days initially but by the 17th century, the number was doubling every 11 days.

The researchers mined information from individual wills and testaments to establish how the plague was spreading through the population.

“At that time, people typically wrote wills because they were dying or they feared they might die imminently, so we hypothesized that the dates of wills would be a good proxy for the spread of fear, and of death itself,” says Earn.

Traced to bacteria 5,000 years ago
Otherwise, the oldest strain of Yersinia pestis has been found in the remains of a 5,000-year-old hunter-gatherer in Rinnukalns in present-day Latvia but the ancient strain was not as deadly as its medieval version.

It lacked the gene that first let fleas act as vectors to spread the plague. Instead, this gene was responsible for efficient transmission of the bacterium to human hosts, which resulted in the growth of the medieval period buboes in the sick.

Researchers estimate that it took thousands of years for Yersinia pestis bacteria to acquire all the mutations needed for flea-based transmission in the Medieval Period.