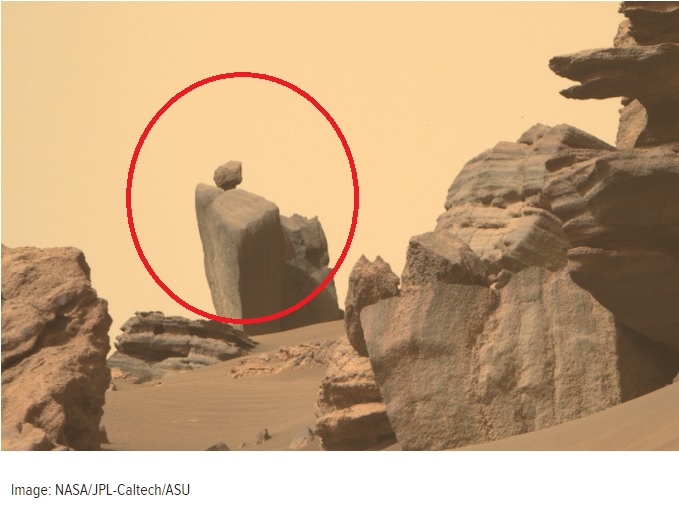 NASA’s Perseverance rover spotted this time what appears to be a precariously balanced rock on a larger outcrop, giving new room for speculations.

It is believed that Mars as a planet is nearly or totally dead geologically, though evidence shows that the Red Planet was once more habitable than it is today.

Whether living organisms ever existed on Mars remains unknown but the Viking probes of the mid-1970s yielded positive results in a temporary increase of Carbon dioxide (CO2) production on exposure to water and nutrients. NASA scientist Gilbert Levin even asserted that Viking may have found life.

But all these claims have been equally disputed by scientists. Undaunted, conspiracy theorists keep the debate alive with several rocks shaped familiar to human surroundings, ranging from squirrels, spoons, doorways, and shoes.

Last month, the Perseverance rover had sent us an image of a shiny piece of material tucked into some rocks, which triggered high speculations to be soon denied by NASA.

The US space agency believes that the shiny piece could be a piece of the rover’s thermal blanket from its landing in 2021, about 1.25 miles (2 km) away from the place where it was found. NASA said that it could have been moved by the wind or landed there by itself.

Not even a month passed but another surprise stunned Mars observers. This time, NASA’s Perseverance rover spotted a precariously balanced rock amid a larger outcrop.

Read: Future Mars to get a ring like Saturn after destruction of Phobos (November 24, 2015)

Roundish in appearance, the rock appears to be carefully balanced atop a jagged outcrop and the image raised the imminent question — how did it get there?

Located in Jezero Crater on Mars surface, the image was taken by Perseverance’s right Mastcam-Z on June 12. Explaining the rock and its precarious location, James Rice, a geologist on the Mastcam-Z team from the Arizona State University, says the phenomenon is not new. He said the precariously balanced rocks (PBRs) are naturally occurring on planets and not really that unusual.

Often a balancing rock is in fact connected to the larger underlying rock by a stem or pedestal. The Martian balancing rock was found at the Rockytop outcrop near the base of the delta and was most likely formed after extensive aeolian (wind) and/or chemical erosion carved it out from the local bedrock, he says.

These types of features are more than just geologic curiosities and known as “reverse seismometers” since the existence of PBRs help to measure earthquakes or Marsquakes that didn’t happen.

If these rocks are still balanced, then the ground hasn’t moved enough to knock them over. Hence, these rocky features enable us to learn about a region’s seismic history.

NASA and other space scientists have frequently ruled out such weird images as evidence of life but categorize them under optical Illusion.

“Our eyes play tricks on us, and that’s especially true when viewing an alien landscape full of both familiar and unfamiliar sights. We’re seeing two-dimensional representations of a three-dimensional world, so these optical illusions are bound to happen,” explains Rice.

However, the truth about existence of alien life on Mars is not far from unfolding before us.

NASA’s Rosalind Franklin rover mission slated for 2024 is likely to reveal more in its search for evidence of past life on Mars and China is gearing up for a manned mission in 2033. By 2050, we’ll certainly have humans reporting to us about Mars surface and its ancient mysterious past.