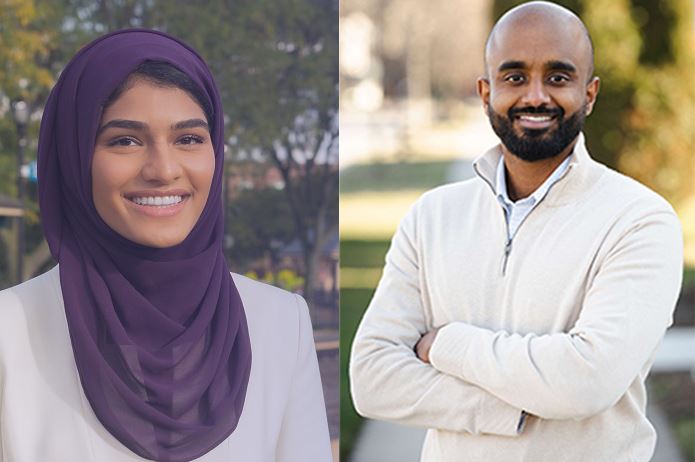 If elected, Nabeela Syed and Kevin Olickal will be first South Asian Americans in the Illinois state legislature

“My name is Nabeela Syed. I’m a 23-year-old woman of color running for State Representative in the suburban community I was born and raised in,” she tweeted. “And I just won my primary election with 72% of the vote.”

Hailing her victory as “historic,” Syed as a “woman of color,” noted the significance of her nomination in a district that takes in parts of suburban Cook and Lake counties. She said the strong win emphasizes the grass-roots nature of the campaign.

“We had so many incredible folks who have donated, who volunteered their time, who have dedicated their energy, their heart to this historic victory,” she said.

Syed, of Inverness, will take on Republican incumbent Chris Bos in November. She vowed to continue working hard “to present a candidate that is more in line with what this district wants.”

Syed has worked as an organizer with such groups as EMILY’s List to raise money to elect Democrats to Congress. She served as the campaign manager for Township High School District 211 board member Tim McGowan and has worked as a high school debate coach.

According to her website, Syed is running “to build a better Illinois for residents today and tomorrow – an Illinois with a strong economy, sustainable infrastructure, and affordable healthcare, and higher education.”

In the 16th District, Olickal held a lead of more than 560 votes out of more than 9,400 votes cast over State Rep. Denyse Wang Stoneback, 52, in the district, which includes all or part of Skokie, Lincolnwood, Morton Grove and Chicago’s 40th and 50th wards.

According to unofficial results cited by Patch, Olickal took 60 percent of votes cast in the city, while Stoneback received 57 percent of those cast in the suburb.

The race represented a rematch from two years earlier, when both ran for the seat against former State Rep. Mark Kalish, who had been appointed by longtime State Rep. Lou Lang following his 2019 retirement.

Olickal said he had not planned to run again this year. “However, several community members, organizations, stakeholders, repeatedly came to me with their concerns about their representation. They were feeling unheard, forgotten and left out,” Olickal said at a forum, hosted by the Skokie Public Library.

“And after I saw the incumbent fail to support our state’s most historic gun violence prevention bill, HB 562 and learn of her decision to hire someone, a chief of staff, who was responsible for the mishandling for large incidents of harassment, discrimination, I knew I could not remain on the sidelines,” he said.

According to his website, Kevin Olickal is “committed to fighting for middle-class and working families, ensuring that every community has a voice in government.”

Olickal was born and raised in Skokie, Illinois, to Malayali parents who immigrated to the United States in late 1980s. After graduating with a Bachelor of Science in Biology at the Ohio State University, he returned to Illinois to engage in public service and build a career in advancing and protecting the progressive values that enabled his family to become successful in the US.

Although Olickal is a Democrat, his passion for politics came from his uncle Mathew Olickal, a Republican who began engaging Indian Americans in the 1970s and 1980s by getting immersed in local politics.

“His motto was to encourage political participation of the local Indian American community, although I must add he was a great admirer of President (Barack) Obama,” said Olickal.