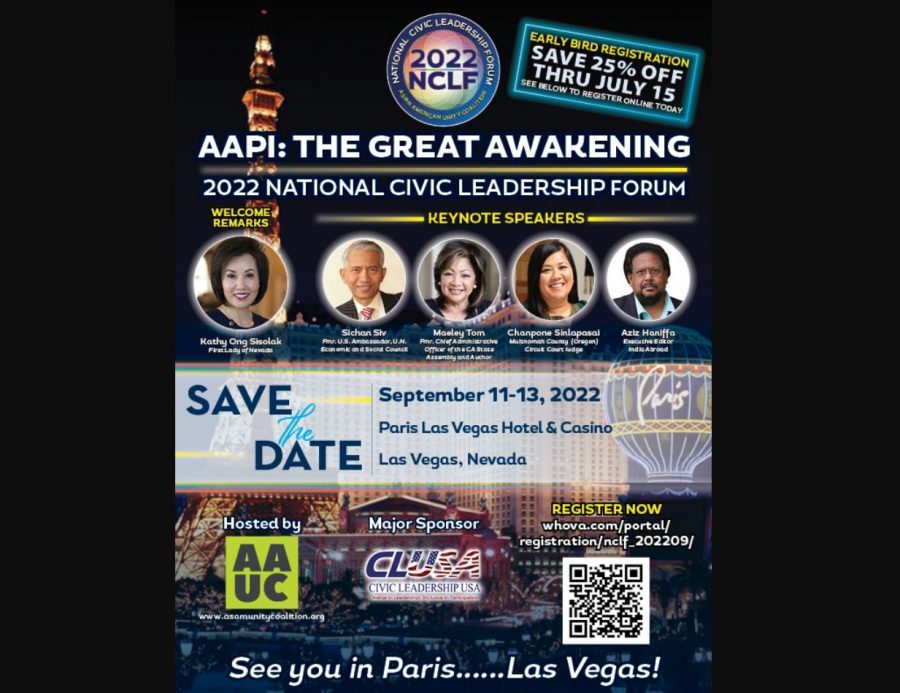 The Asian American Unity Coalition (AAUC) is hosting 2022 National Civic Leadership Forum with the main theme of “AAPI: The Great Awakening” from Sep 11 to 13 in Las Vegas, Nevada.

The three-day event at Paris Hotel and Casino is aimed “to create a community platform for all AAPI organizations and leaders to interact, to work together, to learn from each other and to build trust so that our community will be strong via unity,” according a media release.

Nominations are also being sought for a “President’s Award for Young Asian American Person of the Year.”

The nominee must have demonstrated accomplishments in his/her professional field or in starting up a new business venture or recognized for social/community service.

Self-nomination is allowed. Nomination forms provided must be received, no later than July 31. The winners will be selected by a unanimous decision of the Awards Committee, AAUC said.

The 2022 NCLF in-person conference belongs to AAUC’s diverse multi-cultural groups covering seven or more ethnicities that provided the content and delivery of the event sessions, according to the release.

It seeks to strengthen partnerships with all Asian and Pacific American communities and create an ongoing dialogue with other communities.

AAUC is also proposing to host a half day youth program prior to the regular 2022 NCLF on Sep 11 to provide an opportunity for AAPI youth to organize, work, coordinate and form networks with youth of other AAPI ethnicities on a civic leadership program for themselves.

AAUC is calling for 5-8 youth leaders of all AAPI ethnicities to lead and organize the 2022 NCLF Youth Program.

They will be given a budget to organize the event with the responsibility to design and coordinate the program under the main theme of the 2022 NCLF: “AAPI – the Great Awakening”. The program should attract youths from as diverse a community as possible with a target attendance of 50+ youths.

Those interested should contact Khanh Tran, coordinator of the youth program, at khanh.g.tran1@gmail.com before July 23, according to the release.