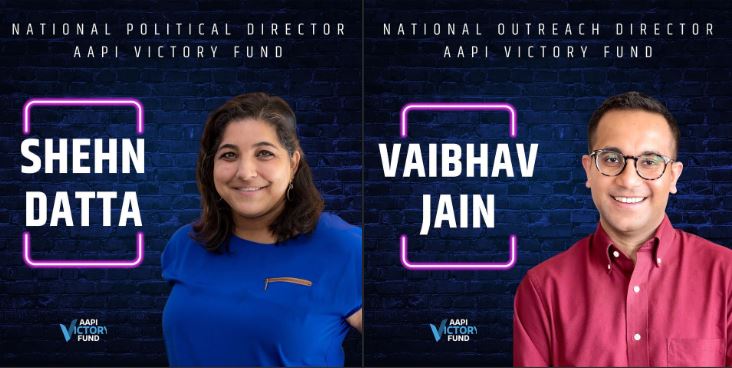 The AAPI Victory Fund has appointed two Indian American community advocates to top jobs as part of efforts to educate, empower, and mobilize its 23 million-strong electorate ahead of 2022 midterm elections.

Shehn Datta, a seasoned strategist who worked on President Barack Obama’s campaigns in 2008 and 2012, has been appointed National Political Director.

Vaibhav Jain, who served as Senior Advisor for AAPI Outreach and Engagement on Joe Biden’s winning presidential campaign in 2020 and then joined his transition team, has been named National Outreach Director.

“We, at AAPI Victory Fund, are so excited to have Shehn Datta and Vaibhav Jain join our team as National Political Director and National Outreach Director, respectively,” AAPI Victory Fund President and CEO Brad Jenkins stated.

“These two individuals have dedicated their time, resources, and lives to empowering communities and ensuring our democracy works for everyone.”

“Shehn Datta comes to us with over a decade of experience and expertise in advocacy, creating collaborative spaces, and movement building,” Jenkins said. “As National Political Director, we look forward to strategizing with her to build AAPI political power across the country.”

“Vaibhav Jain has been an integral member of the AAPI Victory Fund, dating back to his organizing work on the 2021 US Senate runoff elections in Georgia.”

“Thanks to Vaibhav, we have expanded engagement with diverse community groups across the country, increased our digital footprint, and are better positioned to mobilize key blocs of AAPI voters in upcoming elections,” he stated.

“With their guidance, we can help the AAPI community reach its potential and save the future of our democracy,” Jenkins added.

“I am elated to join AAPI Victory Fund as their National Political Director and join in on their efforts to engage and empower progressive AAPI voters to be the margin of victory at all levels of the ballot,” Datta stated.

“This year’s elections are going to steer the direction of our democracy, making it more important than ever to band together and get out the vote.”

“As National Political Director, I look forward to working with AAPI Victory Fund to enfranchise and motivate the AAPI community to flex their political power, while bringing culture to the forefront of our work,” Datta added.

“As an immigrant, I have learned that America’s promises of equality, opportunity, and freedom are not a guarantee. They are commitments that must be renewed by each successive generation,” Jain stated.

“Civic engagement and participation in democratic processes are what bind us together and strengthen our union. I am humbled to serve the AAPI Victory Fund as National Outreach Director to ensure that we continue to be the margin of victory in elections and the redeemers of the values that drew so many of us here.”

“I look forward to scaling our efforts to recruit, educate, mobilize, and turnout 11 million AAPI voters, whose voices will be heard at the ballot box and whose leadership will be reflected in the halls of power,” Jain stated.

Datta most recently served as the Senior Political Strategist at the National Democratic Redistricting Committee, where she collaborated closely with external partners and internal teams to bring about just and fair redistricting, while battling an undercount in communities of color and for marginalized people.

Over her career she has worked to elect candidates who support progressive policies with a focus on mobilizing the young voters and climate champions at NextGen America.

She has advised donors on political programs and opportunities in the states at the Democracy Alliance, and fought for a stronger democracy at both State Voices and the Ballot Initiative Strategy Center.

Datta additionally fought to elect – and then re-elect President Barack Obama, spending the majority of the campaign cycles in North Carolina.

Raised in the San Francisco Bay Area, Datta received her Juris Doctorate from the University of Oregon School of Law and her Bachelors degree from Mills College, in Oakland, California.

Jain is responsible for developing and executing the Fund’s strategy to mobilize and turnout 11 million Asian American and Pacific Islander voters in US elections.

Prior to his experiences in electoral politics, Jain spent five years as a qualitative researcher at the American Institutes for Research. He was also a fellow at the World Health Organization in Geneva, Switzerland.

Jain is a vocal advocate for LGBTQ+ rights. He grew up in New Delhi and now lives in New York with his husband Parag Mehta. In October of 2020, they filed a petition with the Delhi High Court seeking recognition of their marriage.