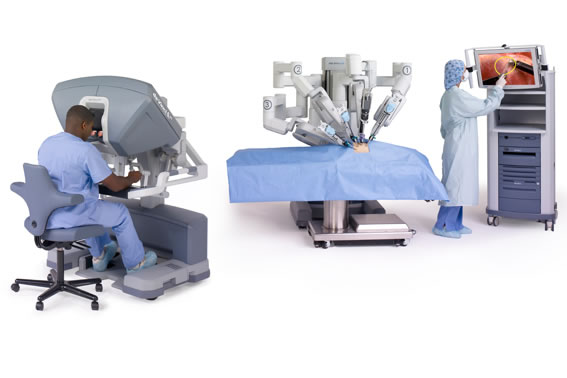 Reminiscent of playing a video game with controllers, surgery by doctors using robots has become a norm in many procedures ranging from brain to bladder. But moving ahead, medical technology firms are actively exploring doctor-less surgery by robots entirely with accuracy and perfection.

Using Artificial Intelligence, some major companies led by Intuitive Surgical, which dominates the market for soft-tissue robotic-assisted devices to Johnson & Johnson, Medtronic and Stryker, are investing billions of dollars into developing surgical robots.

As technology is replacing many procedures in medical care, some futurists think we’ll reach a day when surgeons won’t even need to be in the operating room during a surgical procedure.

Michael Yip, an assistant professor of electrical and computer engineering at the University of California, San Diego, has been working on a robot that examines the body and gives the doctor several options to choose. Once the doctor picks, the robot takes over the procedure as the doctor merely supervises.

Though the concept of autonomous robotic surgical machines is many years from becoming reality, Yip thinks the technology could broaden access for patients in rural or remote areas to access top surgeons and specialists.

“We want to remove surgeons from doing the fine precision work, which is really about how good you are with your hands, and move them into a more supervisory role of how and where you treat disease,” he says.

Now, scientists are excited about the potential for artificial intelligence, improved connectivity, and other technological advancements to foray into a new robotic-assisted surgery that has a potential of $4 billion worth market, according to an estimate by Medtronic.

Currently, robotic procedures remain expensive and accessible to about 2% of all planned procedures, while traditional minimally invasive surgery accounts for 30% to 35%. More than 60% of procedures are traditional open surgeries done with larger incisions, according to the estimate.

Usually, automation makes things cheaper, but robot-assisted surgery is more expensive compared to traditional or open surgeries. The da Vinci Xi robot developed by Intuitive and popular among the surgeons costs between $1.85 million and $2.3 million.

Another series of surveys conducted in the Middle East in 2019 showed that only 27% of the surgeons thought that the surgeon has complete control over the robot, and 25% surgeons were not sure of it.

Between 2003 and 2017, robotic-assisted surgeries increased from 1.5 percent to 27 percent of surgeries, while laparoscopic surgeries declined in parallel during the period.

Cost-wise, robotic-assisted surgery averaged $2,678 more than those associated with laparoscopic surgery, due to longer operating room times and higher supply costs. The average surgery time hovered around 37.5 minutes longer than in the conventional laparoscopic group.

Robotic surgery is expensive but its long-term health benefits might pay off in the long run, said Chris Childers, a general surgery resident at the Ronald Reagan UCLA Medical Center, who analyzed financial statements of Intuitive Surgical, leader in the surgery robot manufacturing three years ago.

Melinda Maggard Gibbons, a general surgeon who’s a co-author of the study, said robotic surgery is expensive because instruments have to be constantly repurchased.

Though robotic operations are expensive, Erik Dutson, a general surgeon at the medical center with 18 years of robotic surgery experience, said they can actually save patients money. “[If it] results in even one less complication over the course of a year, it basically pays for itself,” he said.

As technology advances and more companies produce robots, Girgis hopes that the cost of robotic surgery will decrease. Childers said robots will become standard in operating rooms in the future. “No one is going to just be doing bare, hard surgery 50 years from now.”

Dutson is confident that robots will one day completely replace human surgeons. “Robots are going to replace everybody in every field that we have right now, and it’s going to be driven by artificial intelligence more than anything,” he said.