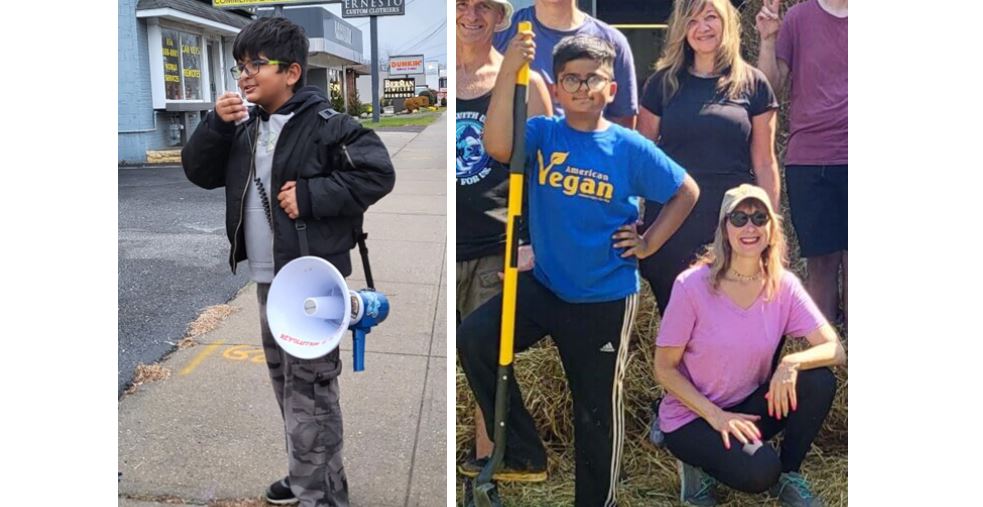 Nirvaan Agarwal has attended county commissioner meetings to advocate for animals held in a roadside zoo and volunteered to help animals in sanctuaries. A vegan since birth, Nirvaan has been making use of every opportunity to help animals.

The young boy has been sharing his message through a bullhorn during marches and has been decrying the cruel treatment of animals in the fur and leather industries. Apart from that, to create awareness he has also been chalking animal rights messages onto sidewalks.

After flooding from Hurricane Ida affected the Johnson Park Zoo, he attended Middlesex County Board of Commissioners meetings and presented his own research about why the animals there should be moved to reputable sanctuaries.

His efforts paid off as the county plans to place the red fox, raccoon, pythons, and other animals in new facilities. A guardian to three adopted cats, Nirvaan also enjoys building cat castles and plans to become a vegan chef.

“Whether he’s marching in vegan rallies or urging county leaders to help animals languishing in a roadside zoo, Nirvaan is setting a heroic example for young people everywhere,” says PETA Senior Director of Youth Programs Marta Holmberg. “Animals have an ally in Nirvaan, and PETA Kids is delighted to honor him for leading us all toward a kinder future.”

In addition to a year’s supply of vegan cookies from San Diego–based Maya’s Cookies Nirvaan will receive a personalized bullhorn, an assortment of merchandise from PETA Kids.