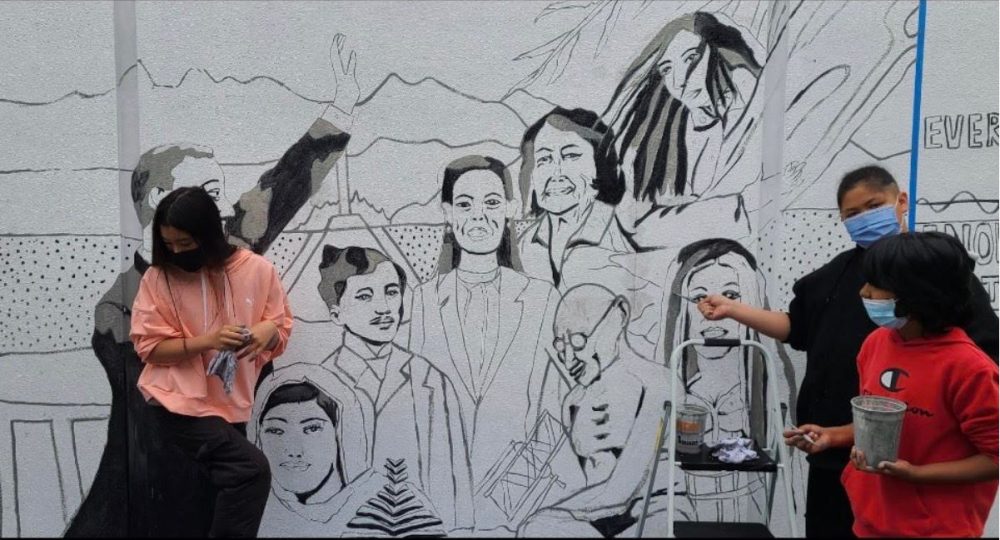 Bay area based award winning Indian American artist Sujata Tibrewala along with American artist Sabrina Davidson recently painted a mural at an Elementary School in California to give children of color role models they can relate to.

“Being a first generation immigrant and a woman of color in art in America, I am acutely aware of what lack of role models you can relate to can do to the psyche of young kids, that’s why we created something for the kids that can have a long-lasting impact on them,” says Tibrewala.

It’s not very often that in the current day America, even with a burgeoning South Asian origin population that you may find pictures of brown icons like Mahatma Gandhi or Malala Yousufzai painted together as new-age kids icons.

But a public elementary school in California boasts of a life size mural depicting not just these two iconic figures but also others achievers and activists of color as role models for little kids.

The idea behind this mural came about in 2021, when everyone was coming to terms with the new normal in the pandemic afflicted world. Tibrewala was thinking of ways to bridge the Covid-19 induced social and communal gap through her art. 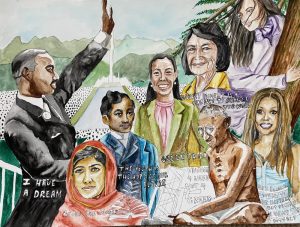 Tibrewala, a resident of Milpitas in California, while running her chores, would pass by the Rose Elementary School in the neighborhood.

She noticed that Milpitas, a city in Santa Clara County, by virtue of having numerous information technology companies amassed a very diverse population. She saw that the majority of students in the nearby school came from Hispanic, Vietnamese, Pacific Islander and Native American communities.

Having seen the lack of representation in mainstream America especially for these kids still, she felt the kids needed some positive message.

She thought of painting a life size mural in school premises featuring role models of color that can be a source of inspiration and encouragement to the young kids.

Tibrewala who regularly conducts retreats and exhibits in America and received an award from Lalit Kala Akademi last year for her painting on Covid-19 along with Davidson, a visual artist from the San Diego State University, wrote to the school authorities with their proposal.

Talking to the Khabar magazine from her art studio in River Island, California, Tibrewala says, “We spoke to the principal of the school who was very excited but once things started moving we also decided that kids should be an equal part of the process. So after exchanging several emails with the school authorities Sabrina and I set up an interaction with the kids.”

“We explained to them that our idea was to paint a mural that features activists, politicians, academicians, philosophers and achievers from varied backgrounds and genders to give the kids an example in their own school of what people of color around the world have achieved.”

But to make the process truly democratic, the artists gave kids a week to think about heroes who inspire them. The artists along with the school decided to narrow down what kids chose and came up with a list.

Tibrewala says, “If you look at all these icons they truly represent what American kids are today. Coming from diverse backgrounds, races, cultures, colors, faith and gender preferences – each of these tell the little kids that they can raise their voice, stand for their rights and refuse to accept what is wrong – no matter where they come from.”

The project truly became an amalgamation when the artists decided to outline the portraits and the kids were given the task of filling in the color. Over a period of several weeks, the kids under the guidance of artists worked to create the mural which is an inspiration for all the future students, who as Tibrewala says– “unlike the earlier generation won’t have to fall short of seeing icons just like us in the American mainstream.”