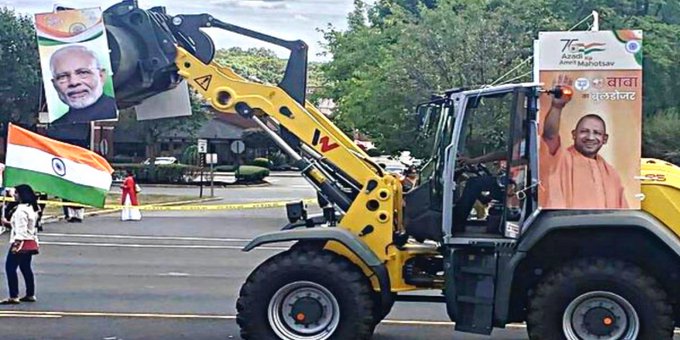 Edison’s Indian American Mayor Sam Joshi has criticized the organizers of the India Day Parade for featuring a bulldozer at the Sunday event saying symbols of hate and discrimination are not welcome in the township.

A banner next to Adityanath’s photo on the controversial float described it as “Baba ka Bulldozer.” Some Muslims view the bulldozer as a symbol of hate for its alleged indiscriminate use to bulldoze homes and businesses in UP.

In a statement Monday, Joshi said Edison is committed to celebrating and working in harmony with people from all cultures. The India Day Parade is independently run and not a township-sponsored event. However his office was made aware that a piece of construction equipment was used as a symbol of division and discrimination.

Any symbol or action that represents discrimination is unwelcome in Edison, he said. “My office will be working with stakeholders to ensure that celebrations in the future serve the best interest of our community.”

But an American-Islamic relations group is disappointed Joshi has not gone further in rebuking the parade organizers, according to MyCentralJersey.com. The group has also called for parade organizers to apologize.

“This bulldozer was included in a parade that was supposed to celebrate the national pride of this country,” Azra Baig, chair of the South Brunswick’s Human Relations Commission was quoted as saying during Monday’s township council work session meeting.

“As someone who is Muslim, I find this terrorizing and harassing and so does the Muslim community across New Jersey, across the country and the world.”

In India, Baig alleged, homes, businesses and houses of worship are being bulldozed because of people’s faith and when they stand up for their rights. “Something this hateful should never be included in a parade in Edison,” she said.

The IBA, which organized the parade, has not responded to an email request for comment, MyCentralJersey.com said.

Baig and Dylan Terpstra, operations coordinator of the Council on American-Islamic Relations (CAIR) New Jersey, expressed concern to the council members that the symbolism could have more far-reaching effects.

Baig wants to make sure this type of hate does spread in the school district, where already Muslims are sometimes blamed when fire alarms go off, the news site said.

“Most people in America don’t understand this was a form of hate. This needs to be condemned and the organizers need to be told it’s unacceptable and there should be more of a vetting process,” Terpstra said.

Some of the Edison council members, who marched in the back of the parade and didn’t see the bulldozer, said they did not understand its meaning until days afterward, according to MyCentralJersey.com.

Council Vice President Joyce Ship-Freeman said she was disturbed by the event. She said if there were a noose in the parade, the council members would not have been walking behind it.

“This is not my Edison. This is not the Edison we should accept. We should all stand against it because if it’s one group today, it will be another group tomorrow. We have to all stand together. We did not know what a bulldozer meant,” she was quoted as saying.

“Selaedin Maksut, CAIR-NJ executive director, stated Tuesday that CAIR is disappointed in Joshi, Woodbridge Mayor John E. McCormac and local officials who have yet to unequivocally condemn the use of the construction equipment – a symbol of violence and anti-Muslim animus.

“The Perth Amboy Area Branch NAACP stands with CAIR-NJ, the Indian American Muslim Council, Hindus for Human Rights and other organizations that denounced this act of hatred against the Muslim community,” the Rev. Donna Stewart, branch president, stated.

“We call on Woodbridge Mayor John McCormac to join us in condemning Islamophobia and to commit to begin working with the NAACP towards antiracism policy in Woodbridge Township,” Stewart was quoted as saying.