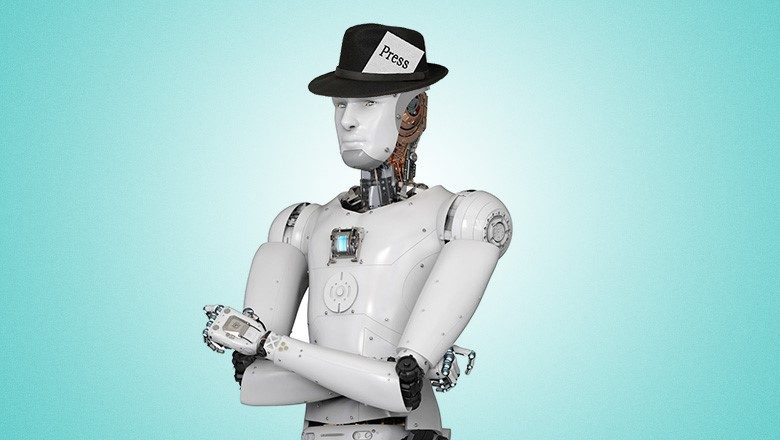 For over a decade, the newsrooms are facing a daunting challenge to reduce costs to survive in a highly competitive global environment. From smartphone journalism to data journalism to reporting the news on Twitter and TikTok, news outlets without using new technology is unimaginable.

With artificial intelligence (AI) entering every avenue of life, both smaller and big newsrooms are vying to employ the new tool and some predictions say by 2025, nearly 90% of news will be written by AI.

In content writing, AI is already employed in transcription software, involving recognition and generation of words from an audio file. Currently, several data-based stories are making use of AI, though employing human supervision at the final stage.

Stories tailored to extract patterns from data, predicting future events and adapting performance based corrections from past mistakes fit in here aptly. The fact-checking process has become the poster boy of many AI programs in the last five years.

JournalismAI tool of Google
In 2019, Google partnered with Polis, a media think tank of the London School of Economics under its Google News Initiative to create the JournalismAI tool that can take over repetitive, simple or data-intensive work, defending typically that it’s not meant to replace journalists per se but to help reporters focus on stories requiring creative insight, analysis and ethical judgment.

Mattia Peretti, the lead manager of the initiative says plenty of useful AI-based projects were completed and are available online. The following year the process was formalized to create the fellowship program focusing on educating journalists unfamiliar with AI and fostering the skills of journalists already using AI technology. In total, 46 journalists from 16 countries were selected under the initiative.

“Our idea was that if we bring in people who are representative of major populations around the world, they could recognize the kind of biases that exist in current data sets,” said Lakshmi Sivadas, manager of the Fellowships program.

“Then, in the systems that they are building or developing right now with the fellowship, they would be able to figure out where bias enters the development process, and mitigate that as well.”

Unlike OpenAI or Google’s DeepMind, whose research focuses on creating artificial general intelligence that functions as an independent human brain, JournalismAI’s project seeks to design tools that require human inputs as well as supervision, she explains.

Accordingly, these projects focused on gathering information, producing content and distributing it to an audience. From identifying trends, issues or events, and monitoring source information, the AI helped newsrooms by collecting and citing articles from various news outlets pushing out stories on the same subject, which Google News aggregator has been doing for more than a decade.

Then news production AIs, focusing on content creation, are rewriting in bullet-points what these news stories are saying by reformatting them to different audiences in a fraction of the time it would take for a human journalist to do so.

Next, the news distribution AIs take over to monitor what impact these news reports are making on consumers, besides tracking readers’ behavior and personalizing newsflow to them or “confining” them to see what they’re most interested in.

“There is not one single journalism student that decided to take this career path because they were dying to sift through several PDF documents day after day,” said Peretti. “That’s something machine learning does very well, and I think we should be excited that we can have the support of software doing all these things for us.”

Attack Detector to Parrot
The program roped in subject matter experts from the field of journalism from BBC to Knight Foundation to mentor fellows based on their needs.

One such program is “Attack Detector,” which seeks to identify hate speech aimed at feeding journalists and environmental activists in Spanish and Portuguese or another program called “Parrot,” which identifies and measures the spread of state-manufactured media.

The results will be showcased in December at the JournalismAI festival, said Peretti and insisted that they are made with “ethical AI use” in mind and none of them are meant to run without human supervision.

However, she is silent on the time frame to make it work under “Supervision” and then going independent, the natural course of any such AI program. Since it would be extremely “dangerous” to allow for unsupervised use of Journalism AI programs at this point of time, Paretti stresses the word ‘responsible’ repeatedly.

“I’m encouraged by what I’m seeing in the industry and I want to presume that a little bit of that is due to the work we do. But we need to continue to stress [responsible use of AI] if we really want AI to be a force of good for journalism.”

Future erosion of journalism
For journalists who witnessed the erosion of print journalism in the last decade due to omnipresent, often erratic and unexplainable Google News algorithms, the next decade under the JournalismAI will make journalists sheer museum pieces in newsrooms. As Lakshmi Sivadas unequivocally said AI will overtake global newsrooms and soon it will be “inescapable” so will it be.

Ethics apart, whether fact checking or community-centric news or event-specific news, all will be churned out by AI managers instantly replacing reporters in newsrooms.

As social media driven “no-ethics barred” journalism is in vogue already, the journalism as a profession is steered to extinction after two centuries of the “human” and “ethical” element imbibed in it.

At a time of surmounting reports of racial and gender biases creeping in racially profiling people of color that rattled medical and linguistic arenas of AI, journalism will not be far behind to fall prey to similar bias.

With JournalismAI employed in every newsroom, despite all the benefits associated with it, journalists per se will soon be replaced by managers to make decisions on how this tool should be used for business. Perhaps, the time is ripe for even digital journalists of today to rush into management roles.