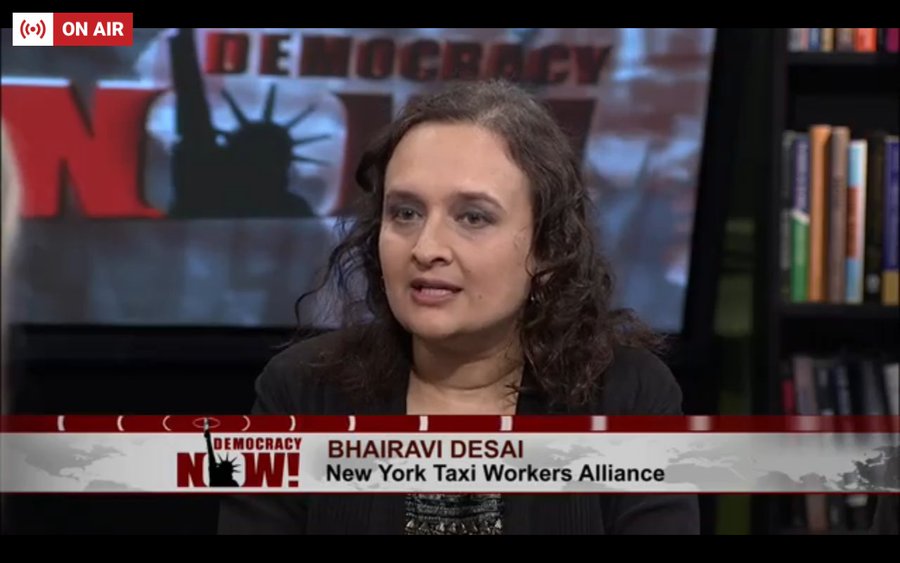 Bhairavi Desai, New York Taxi Workers Alliance’s Indian American Executive Director, has made it to City & State’s New York City Labor Power 100. She is the only South Asian American on the list.

The list features the labor leaders, New York city officials, immigrant advocates and other allies who are building momentum as they stand up for workers of all kinds.

In contrast with its State Labor Power 100, this list highlights individuals whose efforts are largely or entirely within the five boroughs of New York, the news magazine said.

Gujarat-born Desai came to the US with her parents at age six and grew up in Harrison, New Jersey.

Listed at No. 10 “Desai stands at the helm of the New York Taxi Workers Alliance, representing and advocating for a largely immigrant workforce,” the weekly said.

“Over the past two years, Desai has rallied with taxi workers for higher wages and debt relief for drivers who took out onerous loans to purchase taxi medallions,” it noted.

Last October, Desai and the union staged a 15-day hunger strike outside City Hall. In response, the city and lenders agreed to a landmark deal to write down taxi drivers’ debts.

On Aug 30, Mayor Eric Adams announced that the “Medallion Relief Program” which caps the medallion debts at $200,000,” will be operational starting Sep 19.

“The city has also agreed to make $30,000 down payments on the loans and pick up the cost of the medallion loan if the owner defaults on it,” according to the Gothamist.

“This was nine long months. We wish it had gone much faster,” Desai told Gothamist. “One of the consequences of it taking so long is that the interest rate, which we had agreed to at 5% back in November, is now going to go up to 7.3% in light of inflation … but overall, it’s a tremendous gain for us.”

Desai received a degree in Women’s Studies from Rutgers University. After graduation, she worked at Manavi, the South Asian women’s organization in New Jersey that worked with victims of domestic violence.

She then moved to work for the rights of Asian workers by joining the Committee Against Asian American Violence in 1996.

In 1998, she and others set up the NYTWA with an initial membership of 700 workers. She is also well known for efforts for social justice for Cuba, Palestine, and El Salvador solidarity movements.